The pandemic-induced cancellation of countless concerts and performances has put many presenters in a tough bind. When it comes to resolving conflicts between rescheduling events and moving forward with new bookings, calendars and budgets are unforgiving.

Jeremy Geffen, who took over as executive and artistic director of Cal Performances just months before the March 2020 shelter-in-place order, found a neat solution when it came to Angélique Kidjo. The Benin-born, Brooklyn-based star had been slated to present her West African reappropriation of the landmark 1980 Talking Heads album Remain in Light as part of the 2020–2021 season.

Cal Performances also co-commissioned Yemandja: A Story of Africa, Kidjo’s new musical theater production that plays Zellerbach Hall April 23, 2022 as part of the 2021–2022 season’s Illuminations: Place and Displacement series. As he tried to salvage what he could from the previous lost season, “we were faced with a choice: which one did we want to take?” Geffen said.

After a good deal of anguished indecision, Geffen devised a plan that’s put an early stamp on his Cal Performances tenure. Rather than opting for less Kidjo, the campus is getting a whole lot more, as she’s the organization’s first season-long artist-in-residence. Beyond her Oct. 29 Remain in Light performance at Zellerbach and the Bay Area premiere of Yemandja on April 23, 2022, the singer, composer, activist, and humanitarian is participating in an array of public programs and collaborations with students and faculty.

“This is a great opportunity to bring an artist who has come into her own after really putting in a lot of work in the trenches,” said Geffen, who presented Kidjo several times during his 12-year run as Carnegie Hall’s director of artistic planning. “She’s attained a level of international notoriety and leveraged her platform to make other peoples’ lives better, which is wonderfully emblematic of the values that the UC espouses.”

A singular figure on the North American music scene, Kidjo trained as a jazz singer in Paris and has steadily expanded her gravitational pull since moving to the United States in 1997. She’s drawn a panoply of artists into her orbit, collaborating with leading figures in pop, indie rock, new music, and hip-hop. Returning to Carnegie Hall next week to celebrate her recent album Mother Nature, Kidjo will be joined by Josh Groban, Cyndi Lauper, Philip Glass, R&B singer/songwriter Andra Day, the hip-hop duo EARTHGANG, and French-Lebanese jazz trumpeter Ibrahim Maalouf.

Kidjo’s commitment to human rights and free expression stems from her experience under the Marxist government of Benin that tried to turn all cultural expression into propaganda supporting the government. Fleeing to Paris in 1983, she avidly soaked up all the new sounds she encountered, sounds that often seemed to lead back to home. Encountering Remain in Light for the first time, she heard “something that reminded me of my continent and country,” she recalled, “something familiar and so foreign at the same time.”

She presented Remain in Light at Berkeley’s UC Theatre (no relation to Cal Performances) back in the spring of 2018 as part of a tour that anticipated the release of her album reimagining the Talking Heads music several months later. It was an incendiary performance with her band backed by a horn section from the Brooklyn Afrobeat-inspired band Antibalas (and a guest appearance by founding Talking Heads musician Jerry Harrison, a longtime resident of Marin County). With budget constraints, she’s bringing a smaller unit to Zellerbach on Friday, Oct. 29, filling out the arrangements with backing tracks. Cal Performances just announced that Harrison will once again join Kidjo for a few songs at that show.

“I like to challenge everyone, if my musicians are up to the task,” Kidjo said on a recent video call from Brooklyn. “It’s the same as writing a song. If it can’t be sung with three or four musicians, why bother? Technology allowed us to have the horns for this music.”

Among the events she’ll be participating in for the fall portion of the residency are two panel discussions with UC Berkeley faculty on Thursday, Oct. 28 that are free and open to the public (though advance registration is recommended at calperformances.org). “Place and Displacement: Bias in Our Algorithms and Society” looks at the role of technology in perpetuating discrimination, and “Music, Diaspora, and the World” explores the history and enduring impact of the circulation of African musical forms and musicians around the world. Both sessions will be livestreamed and made available afterward on the Beyond the Stage section of Cal Performances’ website.

As interesting as the panel discussion might be, one could simply attend Kidjo’s concert on Friday to see theory put into practice. From the beginning, her music has embodied the creative frisson generated by African musicians on the move, though she’s steadily expanded the dizzying rhythmic ricochets between West Africa and the far-flung diaspora. She followed up Remain in Light with 2019’s Celia, a tribute to Cuban legend Celia Cruz that earned Kidjo her fourth Grammy Award. She plans on slipping in a tune or two from that project amid the tunes by Talking Heads.

“I was talking to David Byrne and found out that he worked with Celia Cruz, and it was an experience that really impacted him,” she said. “The presence of African music in salsa is so deep, and doing Celia’s music together with Talking Heads is tying the knot.”

She designed her Remain in Light band as a sleek and cosmopolitan vehicle for her omnivorous West African-based sound with Argentine-born guitarist Dominic James Miller, who’s worked extensively with Sting, and Senegalese-American percussionist Magatte Sow, a brilliant accompanist and composer whose sabar drum work was featured on the Black Panther film score (a piece he performed as a guest artist with the San Francisco Symphony in 2018). With Chilean drummer Yayo Serka and London-born, Lagos-raised bassist Michael Olatuja, who’ve also worked together with Oaxacan-American singer Lila Downs, Kidjo’s rhythm section tandem is just as formidable.

“I love the way she’s able to fuse different styles and genres in ways that always move the audience,” said Olatuja, a bandleader in his own right who’s performed around the Bay Area with trumpet star Chris Botti. “She has a way to connect with people that transcends genre and language. Her energy is second to none, and I’ve worked with many artists.”

Everyone, it seems, wants to tap into her boundless energy. Among the other presenters co-commissioning Yemandja in addition to Cal Performances are the John F. Kennedy Center for the Performing Arts, MASS MoCA, the newly refurbished Yale Schwarzman Center, ArtsEmerson, and The Broad Stage at Santa Monica College (where it plays April 14-16). Directed by Chicago-based Cheryl Lynn Bruce with stage design by the acclaimed contemporary painter Kerry James Marshall, the fully-staged production features Kidjo singing a libretto written by her daughter, Naïma Hebrail Kidjo, and a full cast of musicians, singers, dancers, and actors.

Named after a Yoruban deity, or orisha, Yemandja is a multilayered parable about gods and humans. Set against the backdrop of slavery in 19th-century West Africa, it’s a tale of love, betrayal, honor, and revenge that reclaims the West African pantheon in all its sophistication. Kidjo was struck during her daughter’s freshman year at Yale when she was studying Greek mythology, “and the similarity with the orishas was mind blowing,” said Kidjo, who’s spent the past decade trying to develop Yemandja.

“Those gods are the same, but when it comes to the Greeks they’re put on a pedestal. West African religion was discounted and some humans decided others don’t have culture or religion. How do we heal the wound?”

That’s not the only historical narrative that Kidjo seeks to rectify. Yemandja offers a more complete account of the trans-Atlantic slave trade, a story that winds through her own family. She was born in Ouidah, a coastal city in Benin that was once part of the kingdom of Dahomey. She remembers the town as haunted by the hundreds of thousands of enslaved Africans who passed through on their way to the Americas.

The story passed down in her family spoke of resistance to the slave trade that enriched the kingdom. “It’s just too simple to say that Africa has sold their people,” Kidjo said. “No one talks about the Africans who stood against it. It’s not talked about in Africa! My ancestors were always fisherman and they said we aren’t selling people, which made them the enemy of the king.”

After attaining global status for her work as an artist and human rights activist, with dozens of awards and citations including Amnesty International’s Ambassador of Conscience Award and France’s Legion of Honor, Kidjo is ideally placed to expand way we think about the African diaspora. It’s a story that manifests in all its complexity whenever she takes the stage. 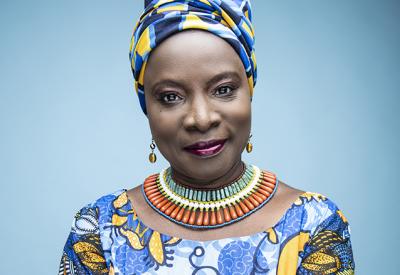 From Benin to Brooklyn: Angelique Kidjo on Her Career

The celebrated singer talks about singing with a full orchestra for the first time in her career.

The celebrated Iranian singer and Kronos collaborator crosses new boundaries with a CD of traditional and contemporary Persian poetry recorded with a Norwegian jazz trio.

Innovative new works, premieres, and a greater emphasis on opera and musical theater energize The Broad Stage’s winter and spring roster of 28 shows.