Music can galvanize a protest movement and inspire solidarity. It can rouse an audience to action or calm a restive crowd. But it’s rare when a regime responds to a voice raised in song by seeking to silence the artist for her defiance.

Already an internationally renowned singer steeped in classical Persian music but eager to mix it up with musicians from other traditions, Mahsa Vahdat became the face of resistance to Iran’s stultifying ban on women performing in public. Singing without headscarves on a Tehran rooftop in the winter of 2012, she and her younger sister Marjan performed “Daram Omidi” from their album Twinklings of Hope (Kirkelig Kulturverksted), an act captured on a widely circulated video that put them in the Islamic Republic’s crosshairs.

Overnight, Vahdat became “one of the most iconic female singers in Iran,” said Sahba Aminikia, the Iranian composer who gained prominence after graduating from the San Francisco Conservatory of Music. It was Aminikia who connected Vahdat with Kronos Quartet, arranging several of her songs that she premiered with the celebrated new music ensemble at the SFJAZZ Center for Kronos’s 2017 Hear and Now Festival. Unable to perform at home, she settled in Berkeley that year with her husband Atabak Elyasi, a savvy arranger and skilled accompanist on several traditional Persian instruments.

Her collaboration with Kronos deepened with last year’s release of Placeless on the Norwegian label Kirkelig Kulturverksted that has long served as a recording home base for Mahsa and Terhan-based Marjan (who’s also featured on the project). For Kronos Quartet violinist and leader David Harrington, Vahdat made a powerful impression at their first meeting before she even started to sing. “Even her speaking voice, there’s something incredibly beautiful to her speaking voice,” he said. “Then I got to hear her sing. Sahba had arranged some songs, and at one of those rehearsals Marjan was in San Francisco as well and spontaneously joined in. That was electrifying! It was very clear to me that we had found a new relationship, a kindred spirit.”

With arrangements by Aminikia, Jacob Garchik, and Atabak Elyasi, the album captured Mahsa at a moment of reckoning as she was coming to terms with her decision to settle outside Iran. A composer with a seemingly boundless imagination for extended, richly ornamented melodic lines, she created gorgeous settings for classical Persian poetry by Hafez and Rumi, songs that evoked the torment of displacement and the ecstasy of divine love. She might not be able to go home, but Vahdat continues to resist defining herself as an exile.

“For me, this identity is changing all the time, sometimes every day,” she said. “Sometimes I’m thinking, maybe I lost my country. Of course I fight for it. You belong to that place and you cannot separate yourself. You think your art is beyond borders, but still feel this extreme belonging. Sometimes I feel I’m an exile, but the good thing for me is that I found my real home, my voice, and my expression in music. My art is always fed by the way I live.” 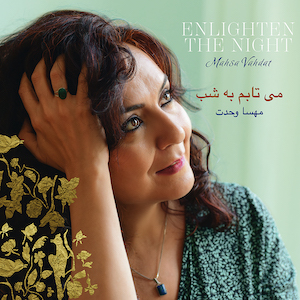 Her new album, Enlighten the Night, which was released in North America by San Francisco’s Six Degrees Records, reflects her new life in Berkeley. Like many of her previous projects it’s a seamless fabric weaving together her compositions based on classical Persian modes and flowing jazz harmonies created by the Norwegian trio of pianist Tord Gustavsen, bassist Gjermund Silset, and drummer Kenneth Ekornes. For lyrics, she returns to the beloved Persian verse of Rumi, Hafez, Saadi of Shiraz, and Omar Khayyam, while also drawing on essential 20th-century writers like Forough Farrokhzad, Nimā Yushij, and the great poet/painter Mohammad Ebrahim Jafari. The album opens with Jafari’s “The Act of Freedom,” a poem about the power of raising one’s voice that concludes:

Working closely with her husband, Vahdat wrote the music with “the wisdom and passion and longing echoes in them,” she said. She elaborated:

They are like living creatures and grew with me in different phases of my life. Hafez and Rumi are defined in Western society as spiritual, but Hafez is very political. The way he questions hypocrisy, the way religion is used as a tool to rule people. Now in pandemic time, the poems of Omar Khayyam become more essential. Death is very close to you, and getting closer and closer with the news that we get. But you can shape the moment. There are a lot of uncertain matters in our life, and we should embrace the uncertainty.”

Always open to new creative connections, Vahdat has thrived in the Bay Area (at least until the March 12 shelter-in-place order). She’s in the midst of a new collaboration with award-winning Vietnamese composer and master of the 16-string đàn Tranh (zither) Vân-Ánh Vanessa Võ, another connection that flows through Kronos Quartet. Võ’s new work, Songs of Strength, is slated to premiere at Cal Performances in March, 2021. She first heard Vahdat perform with Kronos and was immediately drawn to her sensibility.

“I saw her taste is almost like my taste,” Võ said. “Not at all alike, but the same. Whenever I listen to her, I hear her heart vibrating rather than just someone singing. That’s why I really wanted to work with her. Now we’re having a great time working on songs. I work in a different way. She writes her own songs with my concept, and I do the arrangement and the structure. And we’ll do one song that we’ll sing together in her language. Vietnamese is tone langauge, so it’s easier for me to learn other languages than for people to learn mine.”

When she’s not composing, Vahdat keeps a busy teaching schedule with students around the world. She’s worked closely with all-women vocal ensemble Kitka, and has found some avid students in the Bay Area, like Oakland singer/songwriter Adrienne Shamszad, who performs a live-streamed concert from Freight & Salvage on July 25. She doesn't know how long she and Elyasi plan to stay in Berkeley, but for the time being, Vahdat is creative force undaunted by the pandemic.

For Kronos’s Harrington, Vahdat’s calm, self-possessed presence has proven invaluable during hard times. “We started out with a couple of songs, not an album, but I’ve seen her strength while dealing with some incredible challenges,” he said. “One word that comes to mind is grace. She’s one of the first people I called after March 12, and I was pretty upset. She said, ‘David, my voice was quarantined in Iran for years.’ I stopped feeling sorry for myself very quickly.”

The Rumi Symphony Project – Cycle I: Untold, will be presented by Persian Luminary Hafez Nazeri at the Flint Center on March 23.

The San Francisco Girls Chorus will join Kronos for Iranian-American composer Sahba Aminikia’s piece, which blends recordings from the 30s with sound clips from modern-day Iran.