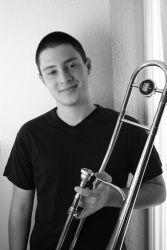 Like other smart jazz organizations, the Monterey Jazz Festival is doing its part to develop the next wave of great players. For a living art form that has seen most of its original creators die over the past decade, this new infusion is essential. They’ve just placed their bet on young people like trombonist Calvin Barthel, granting him the Berklee College of Music’s 15th Jimmy Lyons Scholarship: a full ride to Boston, to attend one of the country’s most elite jazz schools.

Barthel has had an outstanding senior year. His combo at the Berkeley Jazz School in California was awarded Downbeat Magazine’s 2011 Best Jazz Group award, as was another combo and big band at the school. That same band — of which Barthel is also a member — also took first place in the conglomerate division of Monterey’s Next Gen Festival for the third year running. But, like a typically cool jazzer, Barthel is taking it all in stride. “I originally wanted to play saxophone,” he says. “But my Uncle Tom, who worked for the Zurich Opera, pegged me for a trombonist, strictly based on my personality.” Those traits, he clarified, are “being fairly mellow, and not wanting to show off too much.”

As part of its Next Gen Festival, Monterey also selects a national all-star band of the country’s best and brightest high school musicians for a summer tour and performance at its Jazz Festival in September. It’s not surprising that Barthel won a spot in that band of 21, along with five other Bay Area colleagues. “The best part will be getting a pass to hear all of the concerts at the festival,” he says. “There are so many amazing jazz players! I hope I get to meet Herbie Hancock.”

There must be something in the water in the East Bay to have produced this blooming talent — or, more likely, strong mentorship in high school jazz programs, as well as private teachers. Prominent younger artists such as saxophonist Joshua Redman, pianist Benny Green, and trumpeter Ambrose Akinmusire made their start in Berkeley and Oakland — and all previously won the Jimmy Lyons Scholarship. Props to SFJAZZ, the Berkeley Jazz School, and Monterey Jazz for providing outstanding education programs for these kids.

Meanwhile, the Next Generation Jazz Orchestra prepares for a West Coast tour, beginning in Carmel on July 24 and finishing in Los Angeles on Aug. 2. Catch its local stop on July 25 at the San Francisco Yoshi’s. Visit www.montereyjazzfestival.org for details. To hear an interview with Barthel, and catch his trombone chops, listen to our podcast.