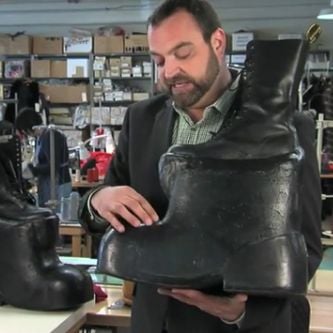 Almost the first thing that anyone learns about Wagner's The Ring of the Nibelung is that it's huge. Its four long operas place incredible demands on the technical side (fire, dragons, flying horses, and lots more) and requires a huge orchestra — the San Francisco Opera production has 89 players, literally all they could squeeze into the pit, including some musicians playing offstage. The singers are onstage singing for hours at a stretch. Young Siegfried, in the opera that bears his name, has a particularly impossible burden, and it takes somewhat of a daredevil mentality even to attempt the role on a major stage.

But do you know about all the little details that add up to creating a Ring? All the small costume details, coordinating and running dozens of props across the entire epic, putting the supertitles together in the best way, insuring continuity in the production, coordinating the hundreds of music-and-stage-action cues, making rehearsal schedules work, plus inventing special effects, and more? In this video, SFCV takes you backstage to find out about all the myriad details that The Ring requires in order for the saga even to make it to the stage. This really is not your ordinary opera production.

This project is supported in part by Gordon P. and Ann Getty, Robin and Kay Frost, and an award from the National Endowment for the Arts.

Tal Skloot is the owner of Tritonemedia, a production company that specializes in the performing arts and story based media. He has worked on numerous feature films and Emmy award winning documentaries. His documentary 'Freeway Philharmonic' recently toured the globe as part of the U.S. State Department sponsored American Documentary Showcase.

Tales From the Musical Melting Pot

Hugh Masekela: King of the Flugelhorn