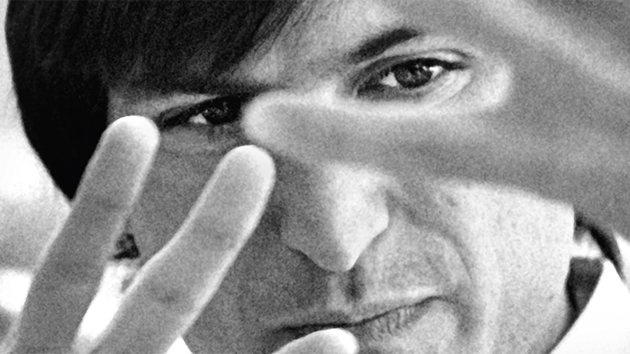 Mason Bates’ new opera The (R)evolution of Steve Jobs, poses challenges even with its name. Should you pronounce the parenthetical “R”? How do you type it without tripping an autocorrection to a registered trademark symbol?

Librettist Mark Campbell defends the double meaning, explaining that, in the opera, “Steve Jobs circles back on the events in his life that formed him and brought about the revolution in technology that he started. There’s also a pun on evolution, on Steve Jobs becoming a better person than he was.” And the pesky (R)? “Well, that’s kind of the story, too!” The world premiere, at Santa Fe Opera, is set for July 22, 2017.

As the opera’s creators discuss the work, they all emphasize the same theme: the juxtaposition of the apparent simplicity of Apple products with the messy difficulties of Jobs’ life. Director Kevin Newbury is excited to mirror that contrast in his staging, in a high-tech production that “pushes the limits of what’s possible in opera and onstage.” Newbury leaves the details tantalizingly vague, but he mentions the seamless integration of the overall design and a new projection-mapping video technology with sensor-embedded scenery elements.

He plays on the idea of open versus closed: Apple machines aren’t supposed to be opened up, but you can force them open and look at the underlying circuits. Humans don’t have perfectly packaged and productized lives, yet there’s no way to open them up and see what’s inside. As we see the opera’s set panels move, we’ll glimpse circuit boards, “the inner workings of the hardware, which double as the inner workings of the human heart.” All this wizardry required Santa Fe to expand the house’s technological capabilities in advance of the premiere. The procduction should prove both exciting and difficult for companies that present the opera in the future (including Seattle Opera in 2018-19 and San Francisco Opera in 2019-2020).

The evolution of this Revolution begins with Mason Bates, a composer with a staggering list of accomplishments. An EDM (electronic dance music) DJ with a Ph.D. from Berkeley. The second-most-performed living composer in the United States. Rome Prize winner, Heinz Medalist, first-ever Kennedy Center Composer-in-Residence. Perhaps most importantly, a composer whose name is familiar and attractive to classical audiences across generations and genres.

Bates is most famous for his incorporating live-triggered electronics into his orchestral music (for which he uses — what else? — an iPad.) His vocal compositions, until now, have been choral and chamber works; Steve Jobs is his first opera. He says that he loves writing for the voice and that writing an opera made sense: “A lot of my symphonic music became very dramatic … opera seemed like the ultimate place to go.”

The topic was Bates’s idea. He describes a Steve Jobs opera as almost inevitable. He didn’t decide to write an opera and then search for a story — Jobs’s life immediately struck him as “the stuff of opera.” He was excited by operas like The Tales of Hoffmann and Death in Venice that focus on creative people. Steve Jobs was an ideal central figure: a creative technologist with a complicated story that technology could — and should — help tell. The topic was so compelling that Bates didn’t even wait for a producing organization to commit to the project. He began recruiting and writing without a commission.

Bates approached librettist Mark Campbell with a challenge: “A lot of your libretti are masterpieces of traditional storytelling. Can we take a story and shatter it into pixels, a pointillistic libretto?” Campbell accepted the mission. The resulting libretto jumps from 1965 to 2007 and then to various years in between. Campbell describes the process of outlining the libretto as intense research followed by difficult cuts. As he explored biographies, Jobs’s public appearances, and “every shred of information [he] could find online,” he identified 30 or 40 interesting moments in Jobs’s life. He arranged those into the opera’s 18 scenes, plus prologue and epilogue, to create a dramatic arc rather than a chronological story.

The musical world of Steve Jobs

Musically, Steve Jobs promises to be a new experience for operagoers. Combining electronics and “classical” instruments is typical of Bates’s work, but this opera includes new instruments and sounds even for him. He’s especially excited about Steve Jobs’s guitar accompaniment: “There’s a huge, steel-stringed, energetic, finger-picking part for acoustic guitar; it’s kind of like the Steve Jobs continuo. That gives it an electronic-folk angle.” The music for Jobs’s spiritual adviser Kōbun also combines old and new. The Sarastro-like part of a “spiritual bass” is well-established, but combining Tibetan prayer bowls with electronics definitely is not.

The more Bates talks about his score, the more his enthusiasm for the human voice is clear. He gushes about mezzo-soprano Sasha Cooke, who will play Laurene Powell Jobs: “She has this amazing, amazing chiaroscuro [timbre in part of her range]; it just melts you. I made sure she has a lot to sing in that range.” And he keeps repeating that “great storytelling can happen when you integrate electronics with the voice.”

Conductor Michael Christie gives his own, excited overview of the score. He mentions the interesting combination of instruments and electronic sampling, especially to color the transitions between scenes. (Since the opera jumps around in time, perhaps Apple gadget sounds from different eras will help us determine the decades we’re moving between.) He describes the overall score as “rhythmic” and “a little trippy at times, which is kind of fun, especially describing Steve Jobs in the 70s and 80s.” (One scene features Jobs and his girlfriend Chrisann on LSD.) He praises Bates’s vocal parts as “very much sung,” rather than syllabic or patter-like.

Christie also tells me about an intriguing approach to the opera’s recitatives: They are scored without rhythms. At Christie’s suggestion, Bates wrote them with pitches but no note lengths, leaving those to the singers’ and director’s discretion. The hope is that each cast will find the rhythms that seem like natural speech patterns to them, keeping the recitative free and conversational. Christie acknowledges that this is a novel experiment, and laughs, “If it doesn’t work, Mason can go off and rhythmicize everything he wants from now on!”

Why a Steve Jobs Opera?

Telling Steve Jobs’s story is hardly a new idea. Movies and books started appearing soon after his death in 2011. Walter Isaacson’s biography of Jobs hit bestseller lists, as did Brent Schlender’s and Rick Tetzeli’s. Ashton Kutcher and Michael Fassbender played Jobs in 2013 and 2015 films. You’d think the public would be a bit Steve Jobs-ed out.

But the team for The (R)evolution of Steve Jobs is excited by what the unique power of opera can bring to the topic of Jobs. They point out that an opera has less of an obligation to be realistic than a biography or a movie; it can highlight underlying themes rather than presenting facts. A “heightened theatrical approach,” in director Kevin Newbury’s words, helps the story become more emotional and human. Bates says, “For Steve, the essence was how to create connections with people and create products that allow us to connect in deeper ways. When he has cancer and he’s not getting chemo, finally Laurene has to say, you can’t control everything, and life doesn’t just have one button. The emotional side, particularly his relationship with his wife, is something opera can explore more deeply because we can have the music unfold.”

In exploring Steve Jobs’s relationships and inner life, the opera necessarily moves beyond documented fact into speculation. Jobs’s connection with his spiritual adviser, the Zen priest Kōbun Chino Otogawa, plays an important role in the opera. Yet the details of their conversations are invented to fit the emotional arc of Jobs as a character. Mark Campbell says the opportunity to develop this relationship between Jobs and Kōbun was a “tremendous help” in making Jobs a sympathetic character. History is a starting point, but feelings matter more.

Baritone Edward Parks, who will play Steve Jobs in Santa Fe, echoes this sentiment in discussing how he prepared his character: “I think most of us know a great deal about Steve Jobs and how incredible his mind was, but in preparing for this part I’m taking quite a different approach. I’m trying to get a sense of who he might have been in the quiet moments of his life. How he handled himself when there wasn't an interviewer or an audience watching him. Through all of this it has become more about the human condition and less about the man.”

Director Kevin Newbury offers an ironic summary of his goal for Steve Jobs as an opera: “We’re hoping at the end of the show, people won’t take their phones out for at least five minutes, because they will want to reflect on it.”

This highly regarded composer of Neo-Americana opens the Cabrillo Festival with a transporting evocation of the Arizona desert.

Santa Fe Opera has another successful launch of a new work thanks to the work of composer Jennifer Higdon and librettist Gene Scheer.