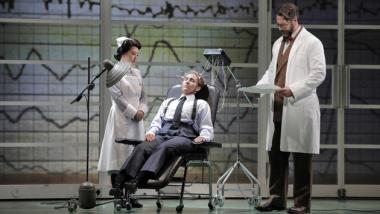 When rumors swirled that San Francisco Opera’s summer season would include Vivaldi’s Orlando furioso, rare opera lovers rejoiced. The rumors turned out to be wrong — but Handel’s Orlando is nothing to sneeze at either. Widely acclaimed by critics and scholars as Handel’s musical masterpiece, Orlando doesn’t appear often on United States stages. Perhaps it’s the static plot: no one falls in love, no one goes on quests, and no one dies. Orlando is a psychological opera that doesn’t believe in the power of the mind. The conflict comes from Orlando’s growing insanity, which only magic can cure.

Director Harry Fehr’s World War II hospital setting works well — and doesn’t feel terribly bold. This Orlando is fundamentally traditional: the mad Orlando chases Angelica, who left him for Medoro. Zoroastro, who protects and treats Orlando, becomes a doctor rather than a sorcerer. The implication that electroshock therapy can cure insanity nettled me, but the rapid-fire ending (including multiple fake deaths and a suicide attempt) was smartly choreographed.

So was the rest of the opera: the characters in Fehr’s staging never lacked things to do, even if they were simply making a bed or putting on a jacket. The result was consistently engaging (nary a moment of stand-and-sing dullness) and reflective of the bustling hospital setting. The Act 1 trio “Consolati, o bella” was a masterpiece; the singers told a whole story of coaxing, sympathy, and jealousy, while singing beautiful (and difficult) overlapping runs. Fehr’s production only failed in its use of projections. At first, seeing into Orlando’s mind heightened our sense of his madness. Over the course of the opera, it became too much: the projections started distracting from the action instead of adding to it.

The staging demanded nuanced acting from its cast, all of whom delivered. Orlando also makes punishing vocal demands: five singers must carry a three-and-a-half-hour marathon of da capo arias. As an additional challenge, every singer in this production was making a role debut. Orlando doesn’t fit mezzo-soprano Sasha Cooke’s voice well; the part sits too low. Her Morpheus aria (“Gia l'ebro mia ciglio”) showed off lovely, golden tone, but mostly her voice failed to shine over the orchestra. That’s not to say she wasn’t fun to watch: her spurts of violent rage truly terrified, and her mad scene mannerisms were both hilarious and heartbreaking. As her beloved Angelica, soprano Heidi Stober displayed wide dramatic range, from lovestruck to scheming to frightened. Her expressive delivery and sharp-edged sound served her character.

By now, Bay Area audiences should be accustomed to reading the praises of countertenor Aryeh Nussbaum-Cohen. He sang Medoro with buttery tone and lovable earnestness. Especially gorgeous was his smoothly sung Act 2 aria of aching nostalgia (“Verdi allori”). A more surprising discovery, Christina Gansch made a brilliant United States debut as Dorinda. Effortless coloratura, silvery sound, and contagious energy meant she lit up the stage whenever she appeared. In “Amore è qual vento,” her Act 3 aria about the dangers of love, her comedic register shifts had the audience in stitches. Christian Van Horn completed the cast as Zoroastro, balancing warmth and sternness to project grandfatherly authority. His rumbling sound pleased the ear but didn’t always carry.

Conductor Christopher Moulds made his San Francisco Opera debut with Orlando. Moulds’s conducting lacked a certain bounce that adds to the zest of this repertoire, but the delicious tones he drew from the orchestra compensated for that shortcoming. Although the San Francisco Opera Orchestra does not often play Baroque scores, they threw themselves into the challenge with gusto. They produced a crunchy, metallic sound, with nice precision on the staccato sections of the overture. Strong dynamic contrasts built interest during repeated snatches of melodies. The continuo section (theorbo, cello, and two harpsichords) kept the recitatives well-paced and variously colored. The orchestra’s biggest problem was a tendency to overwhelm the singers: softer playing or fewer strings would have helped, as would a more acoustically friendly set.

Casting and volume shortcomings aside, this Orlando’s staging and acting kept even my first-time opera-goer companion riveted for over three hours of Baroque opera — no mean feat! The engrossing drama, plus delightful voices, make this a production worthy of repeat viewings.

The production is at its best when it gives the singers space to do what they do best.

Like Water for Opera: Dvořák’s Rusalka Comes to the War Memorial

The lovely, tongue-twisting Czech libretto offers a challenge to the singers — and their coaches.

There’s lots to talk about as usual for the industry as it adapts to cultural shifts and withstands fiscal challenges.

On the Podium With Susanna Mälkki