People laughed last year when the Metropolitan Opera offered Bluebeard’s Castle on Valentine’s Day. West Bay Opera is vying for the “least romantic” title with their Feb. 14 opening of Verdi’s Macbeth, an opera of cruel murders and boundless ambition. Their production proves thoroughly engrossing for three of the four acts. (The other might leave you wishing you’d booked a romantic dinner instead.)

West Bay places Macbeth in a firmly historical setting. Costumes (by Callie Floor) are an SCA lover’s dream, though the switch to all red for the blood-steeped Macbeths in Act II won’t win any awards for subtlety. Set pieces of gray stone transform from castle to heath with changes of the projected backdrop (set and projections by Peter Crompton). The drab set and dim lighting set an appropriately oppressive mood. Faceless witches and ghosts add an element of horror.

Conductor José Luis Moscovich’s love for Macbeth shone from the first strains of the overture. The playing was the crispest I’ve heard from the West Bay Opera Orchestra, and Moscovich found moments of playfulness in the overture’s menacing textures. In Act IV, he elicited a lovely tone from the brass section for the first scene (Macduff’s lament) and evoked a mincing tiptoe for the second (Lady Macbeth’s sleepwalking). Only the start of Act III went awry, with muted sound and a dragging pace, though the orchestra gained verve as the act continued.

Act 3 suffers from broader problems as well. It poses a dramatic challenge because little happens: Macbeth’s second visit to the witches is padded with long stretches of frenzied music. (West Bay Opera presents the Paris version of the score, and Act III contains the obligatory ballet.) Stage director Ragnar Conde fails to use this time for interesting or plot-relevant events. Instead, the witches dance, make menacing hand gestures, and sacrifice a baby. While the dancing (by Pauline Mosley, Alejandra Preciado, and Leyna Swoboda from project agora dance company) is skillfully executed, this aimless revel robs the (otherwise well-paced) opera of its urgency.

Perhaps Act 3 also suffers from the absence of the opera’s star, soprano Christina Major as Lady Macbeth. Major entered the scene in Act 1 with guns blazing, with an “Ambizioso spirito” ranging from forte to fortissimo and sporting miles-wide vibrato. It wasn’t a nuanced start, but it showed off crunchy low notes, a ringing top, and impressive agility. Her Lady Macbeth seemed determined and slightly unhinged. The nuance came later: in her sleepwalking scene, she shaped lines with wistful delicacy. She was partnered well with Krassen Karagiozov (Macbeth), whose baritone boasts creamy legato and crisp diction. He delivered “Mi si affaccia un pugnal?” with the measured, semi-heroic posturing of a war hero, but by the banquet scene he was scrambling on the ground as he spat out his lines.

Benjamin Brady’s gravelly, booming bass-baritone made for a dignified Banco. Tenor Dane Suarez had a late star turn with Macduff’s “Ah, la paterna mano,” thanks to his bright, heavy tone full of squillo and his ability to put sobs into his voice without losing the line of the music. The cast delivered particularly fine performances in the rousing Act 1 finale. “Schiudi, inferno” started as a gorgeously balanced a cappella quartet and swelled into a blow-the-house-out chorus.

The intimate Lucie Stern Theatre allows the audience to experience the full effect of the singers’ voices and expressions. This small-scale opera isn’t without its cut corners: inaudible bit parts, the men’s chorus drifting flat, collapsing set pieces, and ’90s-PowerPoint-inspired projection transitions. In other details, West Bay surprises by punching above their weight. I’d have loved to listen to Deborah Rosengaus (Lady Macbeth’s Attendant) and Kiril Havezov (Lady Macbeth’s Doctor) for longer than their one brief scene. And someone find Jinjia Liu a play to star in: his adorable (silent) turn as Banco’s son Fleanzio was the most genuinely acted bit of the show.

Valentine’s Day is past now, so don’t let the bloody plot deter you from a date night at Macbeth. Well-played, well-sung Verdi is a treat worth sharing. 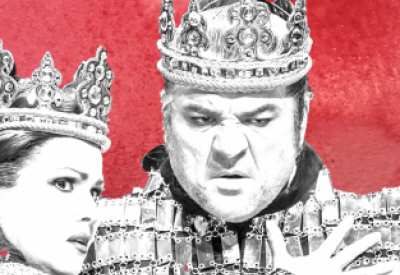