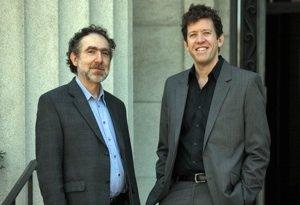 Georgia Rowe on February 2, 2010
Berkeley Opera has always been known for its adventurous spirit. While it has never enjoyed the large subscriber base — or extravagant budgets — of its high-profile counterparts, the company has given audiences a wide range of productions in the last three decades, offering forgotten masterpieces, English adaptations, and world premieres alongside standards of the repertoire.

This month, though, the company embarks on one of its biggest adventures to date: After years at the Julia Morgan Theater, Berkeley Opera is moving to El Cerrito.

Opera lovers needn’t worry. The company is relinquishing none of the maverick spirit it shares with its namesake. And, according to Artistic Director Mark Streshinsky, the move to the El Cerrito Performing Arts Theater will benefit artists and audiences alike. 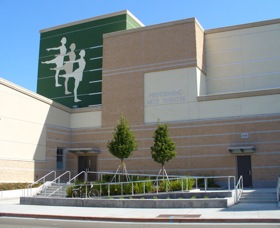 “Berkeley Opera is finally getting the home it deserves,” Streshinsky said earlier this month at the new theater, where the company will open its 2010 season on Feb. 20 with Mozart’s Don Giovanni. The 600-seat venue at El Cerrito High School is a jewel, he says, adding: “It’s a very sophisticated theater, and I think we’ll be able to do great things here.”

In addition to Don Giovanni, which runs through Feb. 28, the 2010 season includes Copland’s The Tender Land (April 10-18) and a reprise of The Legend of the Ring, David Seaman’s three-hour condensation of Wagner’s Ring of the Nibelungs cycle (July 31–Aug. 8). A gala concert at Oakland’s Chapel of the Chimes (March 14), as well as noon concerts at the Berkeley Public Library (Feb. 11 and April 1), complete the lineup.

This is a landmark season for the company, which was founded in 1979 by Richard Goodman and was led by Jonathan Khuner, in a dual role as both artistic and music director, from 1994 to 2009. It’s also a big year for Streshinsky, who was appointed artistic director last year (Khuner remains with the company as music director). 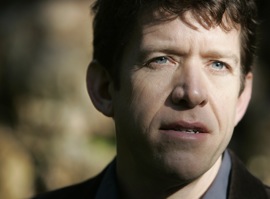 Streshinsky, who first came to Berkeley Opera as a stage director, is an East Bay native; he grew up in Kensington and still lives there with his wife, soprano Marie Plette, and their son. He’s spent much of his career as a director, amassing a long list of credits at the opera companies of Dallas, Cincinnati, and Seattle, among others.

From 2001 to 2006, he worked at San Francisco Opera, where Khuner is a longtime member of the music staff. The two men quickly became friends, and after working together on a couple of San Francisco productions, Khuner asked Streshinsky to venture across the Bay to direct Tchaikovsky’s Eugene Onegin.

The production was a hit, and Streshinsky has since staged Berkeley Opera productions of Handel’s Acis and Galatea, Seaman’s Legend of the Ring, and the world premiere of Clark Suprynowicz’s Chrysalis.

When Khuner asked him about joining the company as artistic director, Streshinsky says he wasn’t sure at first. “I felt I had done all I could at the Julia Morgan,” he remarks. Then the Julia Morgan management let it be known it wouldn’t be renewing the company’s lease. “They decided to go toward family-oriented productions,” says Streshinsky. “They felt that opera didn’t fit into that.”

Streshinsky, who himself had graduated from El Cerrito High, had been watching with interest as the school on Ashbury Avenue was undergoing renovations. When it became clear that Berkeley Opera wasn’t going to find a new home in Berkeley, he reconsidered. “I told Jonathan, ‘If we can bring the company here, then yes, I’ll come on board,’” he says.

Berkeley Opera had built a loyal following at Julia Morgan, but Streshinsky says the company labored there for years under inadequate conditions. The theater has no wing space, and only limited backstage area; sets had to be brought through the front door. The orchestra pit is small; the lobby and bathrooms are tiny. And then there’s the parking situation. “At one point we did a Saturday matinee,” Streshinsky recalls. “It’s all two-hour parking around there. At intermission, the entire audience got up and went out to move their cars to avoid getting tickets.” 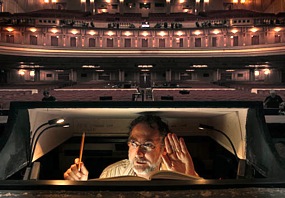 In contrast, Streshinsky says the new theater is a director’s dream. “I was bowled over when I saw the plans,” he says. “It’s beautifully designed, with a balcony, comfortable modern seating, and a decent-sized stage with wing space, a fly system, and state-of-the-art electronics. It has an orchestra pit with an elevator, so half of the pit can come up to the level of the stage and you can load musicians or equipment, then lower it to join the other half of the pit that goes under the stage. I’m used to that in large opera houses, but it’s very rare for a theater of this size to have an elevated orchestra pit.” There’s plenty of parking and disabled access, he adds, and the theater’s a 15-minute walk from the El Cerrito Plaza BART station.

Khuner, who has worked in the Julia Morgan pit for years, says the new theater represents a vast improvement. “I have a feeling that the balances will be better, and sound will be livelier,” the conductor noted in a recent phone call from Illinois, where he was working at Chicago Lyric Opera. “There’s a body to the sound in a real theater, and we’ve never really had that at Julia Morgan. There were dead spots, and the sound didn’t ‘mix.’ I’m looking forward to better sound, and I’m looking forward to having a pit that really functions, with all the electronic support you need so people can stay in touch with monitors easily. Mostly, I feel that the singers will feel better about having a stage to sing from.”

But will Julia Morgan patrons make the trek? All signs point to yes; as of this writing, subscription sales were exceeding anticipated levels.

The move is not without difficulty. Both Khuner and Streshinsky express regret about not finding a permanent home in Berkeley. And Berkeley Opera, like many arts organizations, is tightening its belt. The new theater has 200 more seats than does the Julia Morgan, so Streshinsky has reduced the number of performances for each production from four to three. He’s cutting costs on sets and costumes, and emphasizing simplicity in staging — Don Giovanni, he says, “will be stark and modern. It won’t be crazy because I don’t do that. I like theatrical; I don’t like weird.” The company will continue to rely on backdrops by videographer Jeremy Knight, who has contributed to productions including Legend of the Ring and last season’s Ballad of Baby Doe. 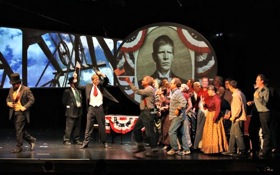 Yet Streshinsky says he’s maintaining, or increasing, budgets for singers and musicians. “My focus is to continue to work with the best singers I possibly can,” he comments. “The singers are the most visible, most important part of our performance.” He’s drawing on a network of artists he and Khuner have worked with here and elsewhere; those engaged for this season include sopranos Christine Brandes and Marie Plette, baritone Eugene Brancoveanu, director Elkanah Pulitzer, and conductor Philip Kuttner.

“Mark is well-suited to the job,” he says. “We’ve had people in charge of production who were also stage directors, but he’s the first person who really puts it all together. He’s an excellent stage director, with considerable experience throughout the country. He knows about producing shows. He has the imagination to see how a production can look, how a whole season can look. He’s also very musical and he really wanted to be in charge of an opera company.

“In all these ways, I felt it was a no-brainer. If he was interested in being artistic director, I would be able to concentrate on music, which I’ve always wanted to do. He’s really taking command, saying, ‘This is what needs to happen to take the company into the future.’ That’s a brand-new strength, which I think is very important.”