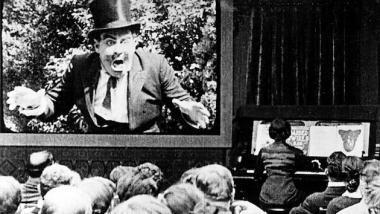 Alone they would sit at the piano in small, darkened theaters, their playing designed to provide emotional accompaniment to otherwise silent love scenes, acts of derring-do, and frantic chase scenes. They were, in essence, the movie industry’s first film composers. And some of them were certainly women.

Can you name a woman film or television composer today? There are many, in fact. According to the registry of the Los Angeles-based Alliance for Women Film Composers, they number in the hundreds. But in an industry dominated by men, women have consistently faced the challenge of breaking through what has come to be known as “the Celluloid Ceiling.”

According to a 2016 survey conducted by the Center for the Study of Women in Television and Film, only 1–2 percent of the composers that created scores for the top 250 films (based on box office) were women. Martha Lauzen, who compiled the statistics for San Diego State University, said in the August, 24, 2016, edition of Variety that number is “shockingly low.” She commented, “The same mechanisms that suppress the numbers of women directors and cinematographers, such as gender stereotypes and expectations, also limit the numbers of women composers.”

Ever since the controversy of “Oscarsowhite,” the Academy of Motion Picture Arts and Sciences has been under pressure to increase the diversity of its membership. As part of that process, in June 2016 the Academy invited 12 women to become part of its music branch, bringing the number to 38 out of 293, which represents approximately 13 percent of the composers, songwriters, and music editors working in the field.

That same year, Grammy Award-winning composer Laura Karpman, whose film and television credits include Paris Can Wait and Underground, was elected as the first female governor of the Academy’s music branch. Karpman also co-founded the Alliance for Women Film Composers (in 2014), has served as its president, and recently was a mentor at this summer’s Sundance Music and Sound Design Lab held at Skywalker Ranch in Marin County.

“I broke into the film industry in the early 1990s. I’m still breaking in, and that’s a function of being a woman in this business,” said Karpman.

Sitting in her home/studio in Playa del Rey which she shares with her wife, film composer and sound designer Nora Kroll Rosenbaum, Karpman said there was a real need for an organization like the Alliance.

We [Miriam Cutler and Lolita Romanis] founded the Alliance for Women Film Composers to raise awareness. We found there was such a need for advocacy and just having an organization where woman composers talk to one another. When we began to discuss the issue of sexism, what emerged were the same stories over and over. But sharing stories about our experiences gives us a chance to reach out instead of biting our tongues.

One of the early goals set by the Alliance, Karpman said, was to discover how many professional women composers there actually are. So the Alliance created a directory on its website.  “We said, if you are a working female composer, list yourself. List your credits. We checked everyone and determined there were hundreds of women composers.”

Stephanie Economou is one of the up-and-coming young generation of film composers. She graduated with a masters degree from UCLA’s Composition for Visual Media program in 2015. Her most notable work has resulted from a composing apprenticeship with Golden Globe-nominated composer, Harry Gregson-Williams, with whom she has worked with since early 2014.

Her credits include composition and orchestration as well as arrangement and score preparation on films such as Ridley Scott’s The Martian, Catherine Hardwicke's Miss You Already, and Niki Caro’s The Zookeeper's Wife. She is also a classically trained violinist.

Working with Gregson-Williams has offered Economou great opportunities and the ability to learn on the job. It has not, however, shielded her from a pervasive atmosphere of male-dominated discrimination and sexism.

“I work in an environment that is predominantly male,” she said speaking from her Santa Monica home. “It’s not something we bring up a lot, but it’s there and it’s important. I’m very well aware of the discrepancy in the percentage of female composers compared to male composers. But I think I can offer a different voice because I am a woman and can approach a film from that perspective.”

I was at dinner having drinks with friends,” she recalled, “and there was this prominent film composer [she chose not to reveal his name] who joined us. He didn’t know me, but said, ‘If you want to be a woman in this business, you need to be more cocky!’ I told him I think there’s a difference between demanding attention and demanding respect. He said, ‘If you’re a woman, being cocky is the only thing men will respect.’ A lot of men have felt the need to tell me how I’m suppose to behave to do this job properly.

Perhaps the subtlest form of discrimination, Economou feels, is in the arena of awards.

“There are so many organizations that have the power to offer awards of recognition for composers,” she observes. “But so many of those organizations are controlled by white men. There’s a real lack of diversity. The Alliance for Women Film Composers recognizes that there has been a lack of opportunities for women, which is why it’s been such a struggle to break through. We need men to understand that so they can help us amplify our voices. We need to be in the room where the important decisions are being made.”

It’s clear that women can bring a different level of sensitivity, communication, and gender identification to their work. But, I asked Economou, how does that translate into the actual work? Is there such a thing as “Women’s Music?”

“That’s a very interesting question,” Economou said after a long contemplative silence. “Ideally, I don’t think gender should be an identifying factor. It’s not something in the notes, but in the overall perception. I don’t think there is such a thing as ‘Women’s Music.’ But I do think it’s important to intentionally offer that type of inclusion and opportunities because ultimately it will promote the evolution of the art.”

The prolific composer muses on her spiritual roots, the creative process, and evoking the dark side through music.