In August, San Francisco’s Kronos Quartet performed with the acclaimed indie rock band The National at the Outside Lands Festival in Golden Gate Park. Although playing rock-influenced music is nothing new to Kronos, the two groups shared a more intimate connection. The National’s guitarist, Bryce Dessner, had also written some of the material Kronos was playing on its current tour.

It was just the latest example of Dessner’s double career as an indie rocker and in-demand composer of music for classical ensembles. Along with his work with The National and the new music quartet Clogs, he’s collaborated with adventurous musicians from Steve Reich, Nico Muhly, Philip Glass, David Lang, and other members of Bang on a Can All Stars, to Bon Iver, Jonny Greenwood (of Radiohead), and many others — another demonstration of the increasingly permeable barrier between the artificial categories of pop and classical music.

He’s also worked with artists in other fields, including choreographer Benjamin Millepied and visual artist Matthew Ritchie, with whom Bryce and his twin brother Aaron (also a musician in The National) created The Long Count, a 2009 commission from the Brooklyn Academy of Music’s Next Wave Festival that featured a chamber orchestra, video, and singers.

That stood as Dessner’s biggest single project until last year’s Planetarium, a song cycle commissioned by Muziekegebouw Eindhoven, the Barbican Centre, and Sydney Opera House and performed this year at BAM and Los Angeles’ Disney Hall. Somehow, while working in two bands, curating festivals, and doing public interest work like the AIDS project and a concert to support the Obama campaign, “I was kind of incubating my own kind of concert music, writing more extended works, finding my own voice within all that,” Dessner explains. His new album of compositions with Kronos Quartet provides a powerful showcase for that aspect of his musical identity. But the road there always had two parallel lanes.

It may surprise anyone who knows the rock guitarist that Dessner grew up playing the flute, then switched to guitar in his teens, after he “caught the rock-and-roll bug from my dad’s and sister’s records.” He studied classical guitar and composition at Yale University, where his mentors included renowned teacher/composer Martin Bresnick and Bang on a Can clarinetist/composer Evan Ziporyn.

“The primary difference between rock and classical musicians is reading the score. Notation is really a language. It lets you communicate with a larger group of musicians.” -Guitarist/composer Bryce Dessner

At Yale, Dessner met the other members of the quartet that became Clogs, which created large-scale works out of improvisations on classical instruments. The band scored grants that permitted them to perform in distant destinations including Britain and Australia, and has recorded five albums since 2001. 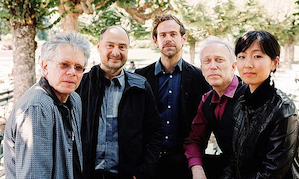 Given his prominence in new music circles, it’s no surprise that violinist David Harrington, an indefatigable scout for emerging composers, asked Dessner to compose a piece for Kronos’ performance at a 2009 new music festival, which happened to be in Brooklyn’s Prospect Park.

The park, Dessner told Harrington, happened to be very near where Dessner’s immigrant grandparents settled when they arrived in America. Harrington replied that the globetrotting string quartet was also scheduled to perform in the Polish city of Lodz, where Dessner’s grandmother, Sarah, grew up, and urged him to use her story for inspiration. That first Kronos/ Dessner collaboration, the urgent Aheym (which means “homeward” in Yiddish), became the title track of a new album.

Poland also touches Tenebrae, because Dessner started that composition the day the great Polish composer Henryk Gorecki died. As the title suggests, it references older works based on the Christian ceremony (for Holy Week, before Easter) by Renaissance composers. In progress is a tribute to another great 20th-century Polish composer, Witold Lutoslawski.

In fact, Dessner’s affinity for Eastern European music (he cites Béla Bartók as a formative influence), particularly Górecki and Arvo Pärt, pervades the album almost as much as Philip Glass and Steve Reich. “The rustic, Eastern European folk quality” Dessner heard from the Czech viola da gamba performers Irena and Vojtěch Havel (who, he says, “remind me of [eccentric New York composer/street character] Moondog, but on gambas”) inspired Little Blue Something. The album’s closing track, Tour Eiffel, sets a text by Chilean poet Vicente Huidobro. It’s sung by the Brooklyn Youth Chorus, accompanied by Kronos and guitar, piano, and percussion. Still, the entire album, the first covering his solo compositions, was “written with Kronos in mind,” he says.

“For this generation, what’s happening in classical music is that presentation, funding, and audience demographic are shifting. So there’s a big opening, and musicians are suddenly empowered to chart the course.” -Bryce Dessner

Dessner may be the most prominent example of the generation of musicians whose music cannot be labeled with old genre terms. “I once had a long conversation with Steve Reich about this, and he said that the interesting thing about my generation is that it’s irrelevant at this point to even discuss the issue of genre. You find people like Jonny Greenwood in Radiohead, who was playing the viola growing up.”

Of course, Dessner acknowledges that rock has always had musicians who wanted to experiment outside of pop instrumentation and other conventions, citing pioneers like the Velvet Underground’s composer/violist John Cale (who, in the early 1960s, brought his Dream Syndicate colleague LaMonte Young’s early minimalism and drones to rock) and the Beatles’ (especially Paul McCartney’s) fascination with composer Karlheinz Stockhausen’s tape music. He points to pop musicians who inventively use studio technology to layer dozens of tracks as the modern equivalent to the complex orchestral scoring of the 18th and 19th centuries.

Dessner’s academic training did provide him with a crucial tool for his success — the ability to read and notate scores. “The primary difference between rock and classical musicians is reading the score. Notation is really a language. It lets you communicate with a larger group of musicians. If you’re involved in playing new music, it really helps to be able to translate your ideas to the page. Having spent so many years playing contemporary music myself, playing scores of different quality … I’ve worked really hard to make sure the music is playable,” even when it’s challenging.

Though Dessner acknowledges the brilliance of many composers who follow the academic route, in which they generally don’t perform their own music but rather depend on commissions from orchestras and ensembles, he notes that some professors base their teaching on their own, older experiences, which “might be different from what we experience today.” Citing the performing composer model that Reich and Glass revived in the mid 1960s, he says that “the composers I know that perform their own works are the happiest. There’s a sense of being involved in that living culture.”

The collaboration with Kronos has been an opening. “Obviously other things about the classical world are still stifling and closed, but it’s less and less the case,” he says. “I find it invigorating. I’m drawn to contemporary music circles, and especially groups like Kronos that have an openness to risk taking … where you can push things formally and sonically in terms of reaching for new colors — breaking new ground is encouraged and embraced.”

He’s even finding mainstream institutions opening up. “There’s absolutely a whole movement going on with orchestras trying to freshen up programming and keep this beautiful tradition alive and vibrant. I recently did a program with the Copenhagen Philharmonic where they played my music and I curated others, and 3,000 people, lots of them young, turned out. And obviously in New York, there’s a vital audience hungry for new work.”

“It’s important to me that people hear my music on its own merit and not in relation to another project I’ve done. Ultimately, the music has its own energy and message and stands on its own.” -Bryce Dessner

An ambitious, multitasking musician like Dessner is in a strong position right now. “In music, because of the changes — the internet, independent labels, radio, distribution — it’s a moment where things are in flux. Ultimately, I think for this generation, what’s happening in classical music is that presentation, funding, and audience demographic are shifting. The diehard people are getting older, so there’s a big opening, and musicians are suddenly empowered to chart the course. It’s an important time for musicians to get involved and stay involved.”

Dessner certainly will. After this week’s performances of Aheym’s orchestral incarnation in Ontario and the chamber version by Kronos at Rhode Island School of Design, So Percussion and Dessner will perform a new piece commissioned by Carnegie Hall on November 23 — the same day the superb ensemble eighth blackbird performs his Murder Ballades (which premiered this April in the Netherlands) in Durham, North Carolina. He has another new Kronos commission, among others, next year, and he just finished a National tour. He’ll perform with Kronos in San Francisco in December.

“People always ask me how I have time for both [tours with the band and other projects],” he says. “My answer is, there are lots of hours in the day. I get to travel the world and play music. I enjoy having these diverse activities and they feed on each other.” At the same time, “it’s important to me that people hear my music on its own merit and not in relation to another project I’ve done. The pieces [on Aheym] come from a very personal place in me … But ultimately, the music has its own energy and message and stands on its own. I’m definitely same musician regardless of what room I’m in.”