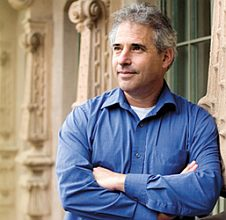 Can You Compose a Hallucination?

Jonathan Berger was teaching at Yale in the 1980s when he read The Three Christs of Ypsilanti, psychologist Milton Rokeach’s landmark 1964 book about three paranoid schizophrenics at Ypsilanti State Hospital in Michigan, each of whom believed he was Jesus. The young composer was mesmerized by this “Narrative of Three Lost Men,” as Rokeach called the delusional trio who had to confront each other and themselves.

“I immediately said, Someday I’m going to turn this into music, ” says Berger, the Stanford music professor and music-and-the-brain researcher whose new chamber operas about auditory hallucinations, Theotokia and The War Reporter, were initially sparked by the saviors of Ypsilanti. “There was something really enticing about making a work of art from this story of three people, each believing he’s Christ, being brought into group therapy.”

But Berger, who will be controlling the electronics when the pieces premiere at Stanford’s Bing Hall April 12 and 13, was never able to get the rights to Rokeach’s book. So he and librettist Dan O’Brien — a playwright and poet who was also crazy for The Three Christs — created the spiritually-minded schizophrenic of Theotokia, who both suffers through and sometimes enjoys his hallucinations. 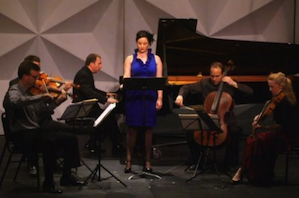 Like The War Reporter, inspired by the haunting aural hallucinations of Pulitzer Prize-winning photographer Paul Watson, it aims to put audiences inside the heads of people hearing voices. Berger wrote the music with the wrap-around seating and electronic sound capabilities of Bing Hall in mind.

Both short operas (the first is 35 minutes) were commissioned by Stanford, where Berger teaches music and cognition at the Center for Computer Research in Music and Acoustics (CCRMA). Its annual Music and the Brain Symposium, whose themes tend to reflect ideas he’s exploring compositionally at the moment, will focus, naturally enough, on auditory hallucinations. The April 13 “Hearing Voices” program (since Berger’s brain will be working overtime that weekend, the conference has been trimmed to one day this year) will feature notable scholars in the field of verbal and musical hallucinations. They include UCSF psychiatrist Judith Ford, talking about the phenomenology of verbal hallucinations; Stanford anthropology professor Tanya Luhrmann, who wrote about the inner voices of evangelicals in her 2012 book When God Talks Back; and Stanford composer and CCRMA director Chris Chafe, lecturing on the acoustics of imaginary sound. Presumably, you’ll be able to hear him.

The sound inside Bing Hall that night will be a mix of live singing (soprano, counter-tenor, baritone, and bass), playing (the St. Lawrence String Quartet, clarinet, flute, piano, bass, and percussion), and ephemeral electronics that bleed in and out. Both operas begin with synthesized sounds pouring from 26 speakers: In Theotokia, it’s the ringing of an antique bell, whose tone Berger morphs throughout; in the The War Reporter, it’s a camera click that grows into a helicopter whirl.

“We all hear sounds in our head, it’s really common. So what’s the difference between that and a hallucination?” – composer Jonathan Berger

Berger programmed the sounds with ambi-sonic technology that “gives you ways of very carefully placing sound in virtual space,” says the composer, talking one recent morning in the black-walled Listening Room in the basement of CCRMA, formerly the mansion of the university president. “A clarinet won’t come up and play in your left ear, but you can make it sound as if it’s playing right in your ear. Bing Hall is perfect for what I’m trying to do.”

At times, Berger’s placement of sound in physical space is inspired by the neurological studies of English researcher Sukhi Shergill that visually track the brain activity of schizophrenics before, during, and after auditory hallucinations. While the audience watches the character’s hallucinations play out onstage, the electronic sounds washing across them mirror the movement of those brain mappings. Berger hastens to add that although he and Shergill are talking about doing some work together in the future, “I don’t think of this as scientific research. This is a piece of music.”

Both operas are directed by Rinde Eckert, the celebrated avant-garde theater artist and musician, whose vision for the staging and props was even more minimal than Berger had imagined.

“In this new and beautiful and pristine concert hall, we’re telling stories that are not pristine and beautiful,” Berger says. “So Rinde really wanted to mess up the look, in a way. There’s garbage on the floor. The draperies will be drop cloths, with ropes hanging down. It’s going to look like a warehouse — which is sort of the messiness of the brain.”

The Edge of Sanity in Art

In Theotokia, a delusional man is one of the congregants singing onstage, but you don’t know which until the end. The audience hears the voices of three “mothers of god” who speak to him. The first is Mother Ann, the leader of the Shakers, the 18th-century religious revivalists whose ecstasy-inducing rituals led them to speak in tongues. She morphs into a strange Himalayan-like figure Berger and O’Brien call the Yeti mother, who becomes the protagonist’s actual mother.

“During the course of her aria, you realize the real mother is as mentally ill as he is,” says Berger, 59, who wrote some of the arias for soprano Dawn Upshaw on commission from the Spoleto USA Festival in 2010. He describes this narrative-less work as a series of vignettes in which “these hallucinations emerge. I hope the audience will be able to piece things together and get a sense of this impending change of reality.”

The music, which in the beginning references Shaker melody, is more overtly tonal than in The War Reporter, whose wrenching text is based on O’Brien’s interviews with Watson. He’s the Canadian photographer who won the 1994 Pulitzer Prize for his brutal image of a dead American soldier being dragged and desecrated by a mob in Mogadishu, Somalia, after the downing of a Black Hawk helicopter. Watson says the moment he snapped the shot, he heard the dead man tell him: “If you do this, I will own you forever.” The voice of Staff Sgt.William David Cleveland, Jr. has haunted him ever since.

“It’s a very gruesome story, and the more horrifying and sad and painful the text was, the more I found myself writing very simple music,” Berger says. “It’s the simplest music I’ve ever written.” The music can be dense and dissonant, “but there are moments when the fog lifts and it’s very simple and clear.”

Watson has lent the production previously unseen photographs from various war zones, including Mosul, in Iraq, that provide visual texture to the story but are not literally projected. The photographer, who has written widely about his guilt-laden auditory hallucinations, will be at the performances, and will also speak at the Music and the Brain segment on Post-Traumatic Stress Syndrome. Joining him will be psychiatrist Shaili Jain of the Veteran Administration’s Palo Alto medical facility, talking about her patients’ inner voices.

The symposium gets cracking with a discussion of musical hallucinations featuring, among others, psychologist Diana Deutsch, director of UC San Diego’s Music Perception and Cognition Laboratory, who has written about musical memory and the illusion of sound. Then comes a segment about schizophrenia, verbal hallucination and “that fine line between what’s sanity and what’s insanity,” says Berger, who became fascinated by musical memory and hallucinations when his late mother was suffering with dementia and humming songs from some distant place.

“We all hear sounds in our head,” the composer says. He notes the well-known but little-researched phenomenon of people in loud and noisy environments, like subway stations, hearing their names being called or their cell phone ringing, when neither is the case.

“In the sensory overload, our brain is trying to pick something out. It’s really common. So what’s the difference between that and a hallucination? It’s a pretty thin line, and I find that really interesting.”