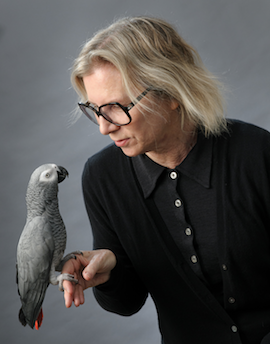 For the last six years, Berkeley composer Wendy Reid has been making music with Lulu, a gray African parrot whose percussive clucks and melodic riffs will be heard on tape and live onstage when Reid performs her intriguing Tree Piece #55 “lulu variations” at the 19th annual Other Minds Festival, March 1 at the SFJAZZ Center.

Composed in 2008 and tweaked with more recent variations, the piece brings together instrumental and avian voices, live and taped sounds, in a spare, timbre-rich sonic world made with “cell-like units of sound that grow,” as Reid describes her process-oriented pieces. This one, which grows from fragments of recorded parrot sounds, features Lulu and Reid’s other beloved bird — a blue parrotlet named Shooshoo, who won’t perform live — Reid’s violin, and muted trumpet, played, at Other Minds, on piccolo trumpet by Tom Dambly.

“This might sound corny, but birds are amazing musicians. Some of them do amazing improvisations,” says Reid, an expansive, good-humored woman with blond hair and big glasses, sitting in the composing corner of her cozy upstairs north Berkeley flat.

The birds are in separate cages in the adjoining room, where Reid’s daughter, Ariel, is pecking at a computer keyboard to the occasional squawk of a parrot or tinkling bird bell. One of the composer’s elegantly drawn Tree scores hangs on a wall. Read from bottom to top, they often take a tree-like shape, with branches that free the musicians to improvise on the pitches and timbres notated on the “trunk.”

“This might sound corny, but birds are amazing musicians. Some of them do amazing improvisations.”  — composer Wendy Reid

Unlike Olivier Messiaen, the great French composer and ornithologist whose music she loves, Reid doesn’t transcribe birdsong. “I’m not trying to match the bird or copy the bird,” says Reid, whose nature-rooted sense of process and formation was influenced by the visionary Swiss artist and violinist Paul Klee. “I’m trying to combine the instruments with the bird.

“Sometimes when I’m playing these little pieces, playing my violin, the bird is interacting with me, but not really imitating me — picking up a rhythm here, maybe enjoying a squawk if I do something there, then taking off on its own melody. People think birds are just mimics, but that’s a bunch of baloney.”

In this 15-minute work, “the bird is the improviser. We’re stuck on the score and she’s the free spirit,” adds Reid, who’s been teaching at Mills College since 1990. That’s where she studied with Terry Riley, Robert Ashley and the Kronos Quartet — one of many groups who’ve played her music — while getting her masters degree in composition in 1980.

Several of the other Northern California composers featured at Other Minds 19 — which opens February 28 with performances by Stanford’s wild Mark Applebaum, electronic music pioneer Don Buchla, pianist Sarah Cahill and others — have long been associated with Mills’ famously forward-looking music department. They include John Bischoff, performing a piece for laptop, toy chime, music box, ukulele, and hand drum; and Roscoe Mitchell, leading a bass saxophone quartet in the premiere of one of his new pieces.

Reid, who grew up in Los Angeles playing violin in youth orchestras and studied composition at the University of Southern California with various atonal-oriented composers and famed film composer David Raksin, arrived at Mills after a stint in Paris studying with the legendary Nadia Boulanger.

Among other things, Boulanger taught her “you can never develop your ideas too slowly,” says Reid, whose later exposure to Riley and Indian music made her even more attentive to music that takes its time to grow. “That was good advice, because I was kind of self-conscious, thinking that the audience would think, ‘Oh, this is too long.’ Now I don’t really care,” she adds with a laugh. “I’m probably putting myself on the line with the parrots ... People have mixed feelings about what I do.”

Even while studying classical violin as a kid, Reid loved the sound of a single note, an open G-string, “the vibration of it. I thought, Why isn’t that a piece itself? I always loved the feeling of the simplest pieces, like Ave Maria, because of the timbre and the sustained tones. Hardly any notes, yet so expressive.”

Years later, creating her own music in the liberating Mills environment, and influenced by Klee’s notion of letting a line go where it wants to go, Reid sought “to get away from traditional music and just use timbre and texture and structure of some sort. I thought process was the best way to go.”

“I’m probably putting myself on the line with the parrots ... People have mixed feelings about what I do.”  —Wendy Reid

The first piece she scored for bird was 1986’s Tree Piece #21, written for violin, percussion (played by the esteemed William Winant, who went to Mills with Reid and has commissioned and premiered her work) and the taped sound of an African parrot named Choo-Choo (not to be confused with Reid’s current parrotlet). As the notated rhythm disappears, the instrumentalists, playing harmonics and other ringing sounds, “are given the same kind of freedom the bird has,” Reid says.

Not long after, Reid, who’d grown up to the sound of parakeets and parrots around the house, had a child, got ill and had to give Choo-Choo away. Reid was so sad she vowed never to get another bird. But after three months, “I started going crazy without bird sounds. I had to have them.”

Lulu didn’t say much when she performed the premiere of her Tree piece in 2008 at the Oakland Museum. Reid has told Other Minds’ director Charles Amirkhanian she doesn’t know how much Lulu — the cover girl for this year’s festival — will sing this time, so don’t be disappointed if she takes a minimalist approach. Her recorded singing, which meshes with the live sounds, will speak volumes.

“I don’t know if Lulu is going to get comfortable enough to really do her thing, but she will definitely make a few sounds. She makes two-or-three-note melodies, she does call sometimes, the gamut of things birds do. And she’s very percussive and humorous. Sometimes when one of my students is playing a Mozart concerto she goes wild. She picks up part of the melody, and if somebody plays a flat note, she plays it in tune. What an amazing bird.”

Reid would love hear Lulu stretch out at SFJAZZ, where the parrot will appear in a specially-designed Lucite cage, a big clear box with many holes. Whatever she offers will be welcome.

“She’s not trained, she’s not a circus animal,” Reid says. “I want her to be seen as a musician, not a sound effect. Some people expect music to do something for them. If you just listen to these sounds, I think you’re going to enjoy this piece.”

Then again, she notes with a smile, “some people will probably think it’s for the birds.”