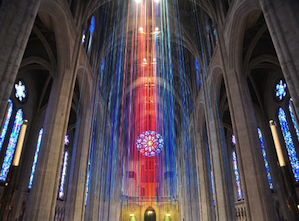 Ever since he sang treble in the boys choir at San Francisco’s Grace Cathedral, New York composer Paul Haas has been stirred and obsessed by the shifting sound of music as it reverberates through an enormous space, particularly one like Grace, with its towering Gothic vaults and seven-second echo. Now he’s written a piece specifically for the spatial and acoustic qualities of the ecumenical Nob Hill cathedral that is his musical and spiritual home.

Haas wrote State of Grace for his noted Sympho chamber ensemble (two flutes, two clarinets, oboe, two violins, viola, cello, trumpet, piano, and organ), which specializes in playing classical music in unexpected spaces, and expressly for the Grace Cathedral Choir of Men and Boys. It was commissioned as part of a beautiful installation by artist and theatrical designer Anne Patterson called “Graced With Light.” It consists of nearly 1,000 stringlike satin ribbons in shades of red, blue, and green — some 20 miles of ribbon — streaming down 86 feet from the ceiling like celestial rays, shimmering with light from the stained-glass windows.

“A lot of music gets performed in cathedrals, but not a lot of music gets written for cathedrals,” says Haas, who will conduct his three-part work this Wednesday Oct. 23 at 7 p.m. in a one-time multimedia performance with Patterson titled “Seeing the Voice: State of Grace.”

Set to Biblical texts that express Haas’ spiritual journey — classics like Psalm 23 and Song of Solomon, as well as passages from Genesis and Epistle to the Corinthians — the piece is both experimental and rooted in traditional liturgical music, says the composer. He draws on the kind of traditional plainchant he sang as a choirboy, and sets loose pulsating, otherworldly harmonies formed by the meshing of reverberating tones.

Haas gives a certain amount of freedom to the instrumentalists, who will be spread around the great concrete cathedral, hundreds of feet away from each other.

“I wanted to create a piece of music that allowed the space to come alive in a new way.” – Composer Paul Haas

“They know when to come in,” says the composer, a lean blond man wearing black-framed glasses, talking about this immersive piece with Patterson on Sunday morning in a meeting room beneath the sanctuary. “I’ve given them approximate tempos, but they’re creating their own textures. Each musician builds his or her own texture, and they come in on top of each other.”

A graduate of Yale and Juilliard whose ensemble has collaborated with the Bay Area’s New Century Chamber Orchestra, Haas began composing this piece after seeing Patterson’s inspiring installation, which he photographed for reference while lying on his back on the cool cathedral floor.The artist, who designed the poetic abstract visuals for the San Francisco Symphony’s 2012 multimedia presentation of Debussy’s Le Martyre de Saint Sebastien, created “Graced With Light” over the past year as the Anglican cathedral’s second artist-in-residence (Anna Deavere Smith was the first, last year). In response to the music Haas wrote and sent her, Patterson added another element to this piece: 13 white panels, placed among the streaming ribbons, onto which video images of abstracted waves and other natural elements will be projected.

Those shifting images, created with Patterson’s longtime collaborator, the projection designer Adam Larsen, will appear on both sides of the panels and spill onto the cathedral’s columns.

“My goal has always been to have the music and the visual go hand in hand” …helping audiences “access the music in a different way.” – Designer Anne Patterson

“We’re going to have a world where sound and visuals are going to be in this ‘sea,’ swimming together,” the artist says. In this surround-sound-and-image experience, she noted at a public forum earlier that morning, “you have no idea where the next thing is going to come from.”

Patterson, who studied architecture at Yale and then at London’s Slade School of Art, has created visual elements for performances by the Philadelphia Orchestra (the Previn/Stoppard piece Every Good Boy Deserves Favor), Atlanta Symphony (Bach’s St. Matthew Passion), and other orchestras, and has designed many productions for the Aspen Opera Theater Center.

Designing for the orchestral world, she creates mostly abstract imagery that allows audiences “to have their own relationship with the work,” Patterson says. “I try to keep the music and the visuals on an even par.” In this visually oriented culture, she adds, people tend to focus on the video and listen to the music secondarily. “My goal has always been to have the music and the visual go hand in hand” — to have the visuals be compelling by themselves while simultaneously helping audiences “access the music in a different way, to become more intimate with the music.”

Patterson has herself become intimately acquainted with Grace Cathedral and its community while making this piece (the red ribbons, which were hung in June, are inscribed with the prayers and wishes of hundreds of people). When she first visited, she was struck by the quality of light pouring into the sanctuary, and by the way people always gazed skyward when they entered, awed by the height of the space and perhaps looking to the heavens.

“I wanted to connect with both those aspects — the physical aspect and the connection to a higher power,” says Patterson, who describes the ribbons as “pathways of light,” linking the divine and earthly realms.

For Haas, who sang in the Grace boys choir from the fourth through eight grades under the direction of then-Canon Organist and Choirmaster John Fenstermaker, the cathedral, with its liberal tradition of inclusiveness, “was always a bastion of enlightenment in this city.” A self-described “choir junkie” as a kid, he particularly loved the sound and feeling of Christmas Eve midnight Mass, singing the tradition hymn Lo, How a Rose E’er Blooming beneath the cathedral’s Rose Window.

Decades later, he wrote an instrumental fantasia on that beloved carol in the second part of this piece, “The Tomb,” for woodwinds and trumpet.

“They each play that melody, but they start at different times, and they’re in different corners of the cathedral,” the composer says. “So when it all comes together, it’s just a mind-bendingly beautiful blur of that piece.” The boys sing a descant high above the melody.

Haas, the former conductor of the New York Youth Symphony who has guest conducted the National, New World, and Fort Worth Symphonies, set out to write an original work for Grace. “But I couldn’t do that without acknowledging the debt I have to it,” he says. Each movement begins with the men singing a plainsong-sounding hymn. But Haas’ musical language draws as much on ragas as it does on Western church music.

“If you blended the Baltic mystics [like Arvo Part], Indian classical music, and alternative rock, you would get somewhere close to my vibe,” says Haas, who thinks this is the best thing he’s ever written, an expression both of what his experience of Grace has meant to him “psychically, emotionally, and spiritually” and of his sense of himself and the universe at this moment in time.

“It’s hard to talk about your own music, but I get really affected hearing it in this space,” he says.

Patterson feels the same way about her luminous installation — which will be on public view through the end of the year — whenever she returns from New York and walks into the cathedral.

“I’m moved by it, and to tell you the truth, I can’t believe I did it,” she says. “It’s one of those moments of creation where something comes through you, and you’re the vessel. It really does feel like that to me.”