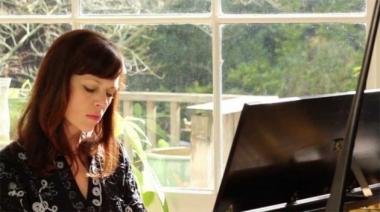 At Community Music Center, the Beat Goes On

Allison Lovejoy had been used to being in the public eye and ear.

As a pianist, Lovejoy has toured internationally and has been a Bay Area regular, sometimes under the aegis of Classical Revolution, at salon venues such as Salle Pianos and Amado’s. She’s taught hundreds of students music history and appreciation at the Academy of Art University and Foothill College and recently received her 25-year certificate at San Francisco’s Community Music Center (CMC), where she’s accompanied vocal classes, led masterclasses and workshops, and taught piano since her graduation from the master’s program in piano performance at the San Francisco Conservatory of Music.

In March, Lovejoy was, of course, distanced from her public, as well as her students. “It was good to see how much people missed music,” she mused, by phone from home. “But then we all had to find ways to reframe how we perform.” To sustain its century-long mission of offering affordable instruction in instrumental and vocal music, the CMC responded quickly after the escalating COVID-19 pandemic prompted San Francisco’s mandated shutdown, on March 17.

“Staff and faculty met together,” reports CMC Executive Director Julie Rulyak Steinberg, “and we decided we would keep our community together. We found people were willing to embrace the unknown. Initially, our entire focus was transitioning our faculty to teaching online and transitioning our students, giving them the tools they needed and helping them connect to the internet.”

Lovejoy, like most of her fellow faculty, learned to use Zoom conferencing as an educational tool, as well as a showcase for her own performances. “It forced us to think about what we’re presenting, and how it looks, more than just how it feels,” she comments.

A couple of weeks after this forced retrofit, “we were approached by a person who had studied at CMC on-and-off,” recounts Steinberg. “This person [a donor] said, ‘I’ve been thinking a lot about you all, and I know that so many of your faculty are also performing musicians, and I can see how hard it will be for them. What have you done to feed their creative side?’ We said very honestly to this donor, we haven’t given that a lot of thought; primarily we’ve been focused on study. So this person went through the idea of creating a relief fund, or a stimulus, where the whole point of it was to be able to imagine a time in the future when [faculty] would be able to pursue things they’ve always wanted. We received a $50,000 gift, and the entire faculty was invited to apply.”

Dubbed “Imagine the Future!” the new and unexpected grant program was announced on April 20 and received 57 proposals by the deadline of May 1, all of which were funded. “It was one of the easiest grants I ever applied for,” says Lovejoy. The grant announcement encouraged faculty to “think broadly and creatively about a future performance opportunity,” with priority given to projects that “reflect on the COVID-19 experience” and “amplify and/or support CMC educational and musical opportunities.”

“I thought the timing was just perfect,” Lovejoy reflects, “because I was just beginning the melody and organizing the text for a song,” about Juana Briones, a legendary curandera [healer] who had dealt with epidemics of her own, when she lived with her family in San Francisco’s Presidio in the early 19th century, when the smallpox vaccine had yet to receive wide distribution. Briones’s song, and additional material about Concepción Argüello, Briones’s contemporary, will take their place in a “cabaret-style musical,” The Best Bad Things, which Lovejoy has been developing with fellow composer and singer Candace Forest. The musical, so far featuring vocalists accompanied by Lovejoy, showcases the “bold, bawdy, and beautiful women of San Francisco — heroines, charlatans, madams, and musicians,” from Arguello and Briones’s time up to the mid-20th century.

“There’s a piano introduction, with a chorus about the curanderas, then a solo [for Juana] and a duet [for Juana and Concepción],” says Lovejoy, describing her current work. “I’m using some Latin rhythms — very florid melodies, working in thirds, which is a trait of a lot of traditional Mexican music. And a lot of the scales are sourced from Spanish and Mexican music.”

Lovejoy’s grant from the CMC “is definitely accelerating the process of getting the songs scored,” she says. “I’m now able to complete a rough draft for my transcriber/arranger to put into Sibelius [music notation software], and I’m asking two singers to demo it, one of them CMC faculty, the other a well-known classical and popular Mexican American singer.”

Marcus Shelby, in his eighth year as leader of the Teen Jazz Orchestra at the CMC, describes the characteristically busy season he was facing when the pandemic came to prevail. “I had the CMC Gala [originally set for April 23, at the Palace Hotel]. I had a run at SFJAZZ coming up, and the San Jose Jazz Festival, all three with my big band [the adult Marcus Shelby Jazz Orchestra]. But then everyone lost their gigs.”

“When it first hit,” Shelby continues, “I was like, this may be reality for a while, so I’m going to reboot, power down. Because since I got to San Francisco, in 1996, it’s been boots-to-the-ground, hustling, gigging, fundraising, one project to the next. And I’m not just talking about me, I’m talking about everybody.”

Distancing mandates and warnings shut down performance venues and the “casual” social opportunities — weddings, memorials, graduations, and so on — on which many jazz musicians depended for income. Shelby’s institutional connections have kept him busier than many of his colleagues, but it’s “very convenient to do out of my home,” he admits, in the company of his two children, 17 and 10. “Today I had a Zoom call, I had a Google Hangout, and I had a Twitch [streaming platform] call, for which I had to download the program and go through these prompts.”

A highlight of his weeks remains his Tuesdays with the 15 or 16 members of the CMC’s Teen Jazz Orchestra, who just ended their spring semester. “We would usually break now and come back in the fall,” notes Shelby, “but for the first time since I’ve been director, we’re going to give a summer session.”

Class meetings on Zoom have “basically changed the experience,” but the instructor has discovered advantages in the technology. “The beautiful thing is, I can share music with them, I can share YouTubes, I can share my screen,” he points out. “Last class period, we watched Straight, No Chaser,” the 1988 documentary about jazz pianist Thelonious Monk.

“And I’m able to focus on all these different kids, who are on different levels and play different instruments,” he points out. He’s dispensed transcriptions: Louis Armstrong and Herb Alpert to two trumpet players at different levels, Oscar Peterson and Thelonious Monk to a pianist (“who’s only 16, but already gigging”), and Jimmy Blanton to a bass player (“she ate them up, like breakfast”; bass is also Shelby’s instrument). The kids practice, then perform for their bandmates during the Tuesday Zoom sessions. Playing in ensemble is daunting, though, “because you have latency issues, and it just doesn’t line up.”

Shelby’s share of the grant money is funding the inception of his original composition for the Teen Jazz Orchestra, tentatively titled The COVID-19 Suite. “The first phase [of four] is where we’re at now,” he says. “We’re doing online discussions, specifically on our experiences with COVID. Some of that might include our feelings about being away from our friends, being stuck with family, space, death, metaphors for the masking. I’ve got 10 really solid themes that we’ve talked about. Maybe one section would be called ‘Six Feet Apart,’ and another ‘Sheltering In.’  We try to find pictures and stories and feelings that I can create music for. We talk about, what is a suite, and I play them some of mine … what it means to capture history or character or action in music.

“Our summer semester will begin phase two, which will be our getting ready to get together live, and I’ll be [composing] in earnest sometime in July. In August, we hope we can actually rehearse, maybe in sectionals. Maybe we’ll have to all walk around with masks, because the thing about a big band, you have trombones and trumpets slinging spit across the floor. I think people are going to have to get tested … I’m not going to put any kids in jeopardy.

“Phase three is fall, when we’re all back in school, hopefully with the full band, rehearsing from September all the way through May of 2021. And phase four will be to perform our piece and to record it.” Shelby will also be using some of the grant money “to help pay for lessons for some of these kids, with some of the masters I know in the community … to enhance the musicianship.”

Grantees are asked to submit a brief “final report” before September 2021, summarizing their accomplishments. Like Shelby, Lovejoy anticipates a recording she can post to CMC’s website, perhaps with a video, and she’s working towards a performance of the complete The Best Bad Things at the Presidio Theatre, in the spring of 2021.

Both these CMC instructors observe that online instruction fits different students differently. “Older students are not necessarily comfortable with the style of remote teaching,” says Lovejoy. But Shelby singles out a girl who “stopped coming to the live class — she felt it was going too fast for her — and yet now she’s in the online class.”

The weekend of June 6 concluded the CMC’s reimagined online Field Day, named for Gertrude Field, who founded the Center in 1921. “We have literally hundreds of students who have recorded videos for us,” says executive director Steinberg, “and some of our faculty have used their grants to support their own performances, or collaborative performances with their students. The purpose is as a showcase of our community and as a scholarship fundraiser. Every year, CMC provides about $2.5 million of direct financial aid to our students and our community.”

“We don’t know what the future holds,” Steinberg admits, “but so far we’ve been lucky. Our teachers are essential workers, making things happen. Social isolation is a big issue, and we’re hopeful to be able to be that balm, and to continue to be that place that gives folks another way to meet the world, to bring people together through music.”

The Bay Area chorus New Voices is for vocalists who identify as transgender, intersex, and gender-queer.