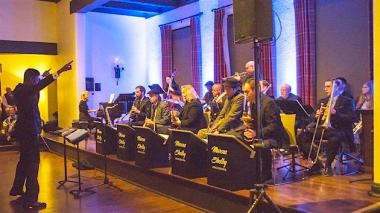 Hearing live performances a couple of days apart had me musing on the parallels between Sergei Prokofiev’s Symphony No. 5, premiered in 1944 and presented last week by the San Francisco Symphony, and Marcus Shelby’s Port Chicago: Suite for Jazz Orchestra, premiered at Yoshi’s in 2006 and performed last Saturday night at the Presidio Officers’ Club, by the 15-piece, all-star Marcus Shelby Jazz Orchestra, under the auspices of the Presidio Trust.

Both the Prokofiev and the Shelby are long-form pieces which advance the deployment of large ensembles, with music sourced in tradition but blossoming in polychromatic variety that at the same time forms a cohesive whole.

The Presidio venue, with its hefty exposed beams and elegant curtains, seemed a comfortable and appropriate place for Shelby to showcase a piece commemorating two disastrous explosions, 75 years ago, at the Port Chicago Naval Magazine, a munitions depot in the East Bay. Of the 320 persons killed in the widespread blasts, the vast majority, due to the Navy’s assignment policies, were African-Americans, who’d been inadequately prepared. The reassignment of surviving personnel to a nearby munitions depot, under similarly dangerous conditions, resulted in a work stoppage, deemed a mutiny and criminally prosecuted. An appeal, launched by Thurgood Marshall (then executive director for the NAACP’s Legal Defense and Education Fund), had a significant influence on Harry S. Truman’s presidential declaration on the desegregation of the armed forces, in 1948.

The sharply attired Shelby introduced his first-ever long-form composition and interpolated commentary on the piece’s sections, referencing the historical and socio-psychological circumstances of the story. The "Introduction" to the 12-part suite set an affecting, dolorous mood, evocative of the similar musical social commentary of Kurt Weill. By contrast, in the “Opening Dance: Port Chicago Blues,” Shelby effectively evoked the era in lively, Ellingtonian fashion, walking the bass (skillfully played here by Tomoko Funaki), with shuffling accompaniment on drums (Sly Randolph), and separating the melody choruses into ’40s big band sections for the seven brass, then the five reeds. Pianist Gaea Schell comped smartly behind the virile, burnished tenor sax solo of Patrick Wolff. Shelby conducted from the front, animatedly pacing, sometimes clapping and shouting, summoning up a spirited tutti shout chorus, with a clarion solo by Santana trumpet master Bill Ortiz.

The “Call to War” slowed down to a second line dirge, with Schell working twelve-tone anguish and Wolff doubling soulfully on clarinet. “Training Day” seemed to evolve the big band sound into a less dancey, more artful Woody Herman rollick. But Shelby also proved here that, whatever mode he moves in, his melodic lines are distinct, tuneful, and attractive. “Mechanized Women” shifted alluringly between 3/4 and 4/4, the alto sax solo delivered with delightful bounce by Kristen Strom, one of four women in the Orchestra.

Taking a verbal break, Shelby allowed that his 90-minute nonstop spell as conductor was “a workout, in which I’m trying to be like Steph Curry,” The “Work Routine I” challenged the ensemble with 7/8 time, with canny polyrhythms and polytonalities. Charles Hamilton, former director of the award-winning Berkeley High School Jazz Program, blew a skillful and sassy trombone solo, and this section demonstrated another of Shelby’s theatrically effective buildups of critical musical mass, in which the Orchestra’s virtuosity showed brightly and consistently.

“Barracks Life” revealed the troops’ troubled dreams, while “Black in Blue” moved the big band sound forward again, into the more experimental regions explored by the likes of bandleaders Gerald Wilson and Don Ellis. “Big Liberty Blues” envisioned time spent away from base, perhaps in the lively clubs of nearby Oakland. Baritone saxophonist Fil Lorenz seemed an audience favorite, suave and seductive, with intricate, biting runs. Rob Ewing displayed a trombone impressive in its soft sweetness, quite different from Hamilton but equally meeting the composer’s needs. This was a Shelby tune fully fit for a standard place in the jazz repertoire, as was the following “Letters Home (Sweet Brownness),” a sweet ballad rather evocative of Kern and Hammerstein’s “All the Things You Are.”

It was next, in affecting theatrical fashion, that Shelby chose to position the “Explosion,” heard fortissimo on all parts of Randolph’s drum set and then in a sustained anguished brass chord. What came “After” was set as a limpid, palliative theme passed from instrument to instrument, with Wolff’s clarinet sounding a particularly appealing call to the heart and auguring the final standing ovation from an appreciative full house. Composer, the individual and collective players, and the commemorated event all deserved it.

With a jazz-inflected score and a student choir, the opera takes on big issues.

Adventurous and diverse artists are playing the Presidio now, as the park’s arts initiatives pick up speed.