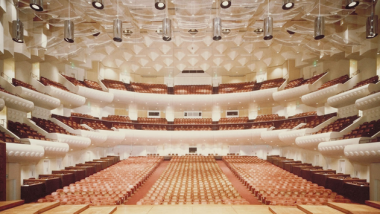 Concert Life Begins to Rise From the Ashes

In big bold letters on its cover, The Hitchhiker’s Guide to the Galaxy offers two words of advice — DON’T PANIC!

It’s a message that orchestras and opera companies across the country are struggling to maintain as season after season is canceled from the Metropolitan Opera to the San Francisco Symphony. And there are so many panic-worthy issues that need to be confronted and planned for: How do companies that received loans from the federal government’s Paycheck Protection Program (PPP) maintain staff after the loans expire on June 30? How does a company maintain an income stream when the only way to connect with audiences (and potential subscribers) is an internet that is already flooded with content, most of it free? How do you promote and sell subscriptions for future performances (in whatever configuration and location) that may ultimately have to be canceled? And what will those live performances look like in the era of COVID-19 and social distancing?

One of the braver faces at the moment is the Los Angeles Opera’s president and CEO, Christopher Koelsch, who is determined that his company will present a fall season. Where it will take place (certainly not in the Dorothy Chandler Pavilion and most likely outdoors), how the safety of audiences, performers, and musicians will be maintained, and what form the performances may take — all at this point are uncertain.

“You have to remain flexible in the face of the unknown and become comfortable with uncertainty,” Koelsch observed. “We are deep into the process of building financial, organizational, and artistic models that will allow us to get from where we are now until the end of the year. It’s important for organizations to maintain momentum so when we do return to the new normal they haven’t lost ground.”

Prior to the March 19 order that shut down all live performances, LA Opera had two upcoming productions in full preparation. At that point, Koelsch said, the company was maintaining an in-house administrative staff of 125, while employing 165 independent contractors (for its costume lab, scene shop, etc.), along with artistic staff, the orchestra, and chorus — around 300 in all. Then on March 27, the $2 trillion dollar CARES Act was passed and with it the PPP loan program, designed to maintain employment.

“Our PPP loan allowed us to maintain all of our administrative personnel,” Koelsch explained. “But the term of our loan expired on June 8 and since then the company has been carrying on with the help of our generous base of patron and foundation support.” However, Koelsch concedes, “If a financial bridge to the fall cannot be sustained, we will face an inevitable round of layoffs and furloughs.”

In coping with the effects of the pandemic, LA Opera (like nearly all arts organizations) has gone through a series of adjustment phases.

“The first phase we went through was reactionary, in which we were responding in real time to the Health Department directives,” said Koelsch.

The process we’re undergoing now is to be more proactive about what may happen in the fall, though we haven’t made any definitive decisions. The overriding question is how do we provide a measure of protection for the vast majority of our people, which is organizationally and financially challenging? I am fairly confident we could maintain a level of safety for our audiences. What I don’t feel confident about is how we can protect the artists and how can we maintain the vibrancy and vitality of our artistic product when we’re thwarted in our attempt to present opera in a traditional way. There can be creative power that comes from working with restraints and limitations. That’s how we’re trying to look at it. The major challenge right now is how do we get from July through January, since getting back into the hall before the end of the year sounds like science fiction. Whatever we are able to produce, at least until there is a vaccine, is not going to look like what we are used to. Hopefully it will evoke the same feeling.”

When Mainly Mozart in San Diego applied for (and received) its PPP loan the company (which would have traditionally presented its annual festival throughout the month of June) made a decision to pivot.

“Our loan stipulated that 75 percent had to go toward maintaining staff while the other 25 percent could be allocated for administrative costs,” explained Mainly Mozart’s CEO, Nancy Laturno.

The loan, however, did not state how those numbers had to be determined.

“With the need to present a June festival off the table, Mainly Mozart made the decision to furlough members of our festival production staff and replace them with new staff members that included a digital media director, a video editor, and a future performance curator. We also expanded the number of instructors that work with the 270 members of our Mainly Mozart Youth Orchestra,” Laturno said.

Knowing that their loan will expire on June 30, Mainly Mozart has used the past eight weeks to both develop its online presence while making plans for a modified festival of live performances, scheduled for Sept. 10–15, along with a major event set for July 11. It’s a concert concept that could turn COVID-19 lemons into live classical music lemonade.

Mozart at the Drive-in

At 3 p.m. and 6 p.m. on July 11, Mainly Mozart will present a pair of “drive-in concerts” on an open-air, three-acre site in Rancho Santa Fe. 70 cars will be admitted for each performance. Admission is free with reservations required. The location will be emailed to ticket holders, and the audience will remain in their cars.

The amplified concert will feature eight musicians, including Martin Chalifour (concertmaster of the Los Angeles Philharmonic) and Jeff Thayer (concertmaster of the San Diego Symphony), on a stage large enough to allow for social distancing. The program will very likely represent the first large scale live concert of classical music in the United States since the coronavirus shutdown.

Another option that Mainly Mozart is exploring is the presentation of concerts at a real drive-in theater, that automotive icon of American popular culture. And in case you haven’t been to a drive-in for years, gone is the era of the tinny sounding speaker that hung on your car window. It’s been replaced by closed circuit, in-theater, digital quality radio transmission accompanied by state-of-the-art digital projection.

As a consultant to performing arts organizations, Chicago’s Drew McManus says the most difficult challenges of the moment are as much mental as they are physical.

“The biggest thing we’re all dealing with is trying to make decisions at a time of so much indecision. That includes planning for worst-case scenarios and the significant loss of revenue stream. Right now, the internet is about the only sphere that can help with that process. But there is such a glut of online content that organizations have to offer quality product targeted at a specific audience/subscribers. The frustration is that a lot of users are not looking at as many options as they could. There is a need to pivot from traditional subscriptions and memberships to new types of online-only benefit packages.”

Content could be pro-rated, suggests McManus. “Say you offer it at 30 percent of a regular subscription with 70 percent allocated to a subscriber’s account for when performances can return to a regular schedule. Or the balance could be given as a donation. The problem is that most organizations have offered their content for free. It’s hard to start charging for something you’ve been giving away.”

Things do look grim: loss of revenue, forced cancellations, audience apprehension about concerts that could end up spreading the virus, etc. It’s certainly hard at the moment to adopt Alfred E. Neuman’s Mad magazine motto, “What, me worry?”

“There’s a lot of anxiety and we’re flat out struggling to just find ways to cope,” observed Scott Silberstein. “The interim goal is to continue to engage audiences and funders who will continue to offer support based almost entirely on online product as we try to come up with live performance options. For now, the standard message everyone is sending out is, ‘We are all in this together, this is just intermission, we’ll be back. And please consider donating.’”

Mainly Mozart to Present a Pair of Live Drive-in Concerts

How Arts Companies Navigate the Unknown

Orchestras, opera companies, and their support services figure out paths forward amid too much uncertainty.

Fundraising in the Age of Coronavirus

Opera philanthropy floats hope upon a sea of uncertainty.