The first thing to know about Cosa Nostra Strings isn’t that the group evolved out of the Jazz Mafia. The quintet does share a good deal of creative DNA with the ever-morphing Oakland collective that’s bootstrapped its stylistically omnivorous aesthetic into a booming cottage industry, collaborating with everyone from racy cabaret productions and soul belters to symphony orchestras and socially conscious hip-hop MCs. 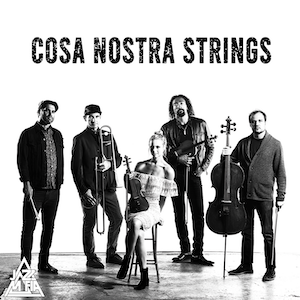 Part of what sets the Cosa Nostra String apart is the group’s deep engagement with leading figures in hip-hop, including collaborations with The Roots, Blackalicious, and Richmond rapper Mani Draper (an SFJAZZ hookup scheduled for May that was postponed by the pandemic). The proudly hybrid band features violinist Shaina Evoniuk, violist/vocalist Keith Lawrence, cellist Lewis Patzner, multipercussionist Aaron Kierbel, and trombonist/producer Adam Theis, who brought the group together around 2015 as part of his quest to write and play with more dynamic calibration than afforded by his usual brass-laden confabs.

Theis and Evoniuk co-lead the combo, but it’s increasingly become a vehicle in which all the players get a chance to take the wheel. For Patzner, who contributed four of the album’s 11 tracks, the opportunity to write for Cosa Nostra has provided a welcome, wing-spreading showcase. On his piece Abbracciare Il Jazz, one of album’s two tracks recorded live at Oakland’s Church of Jazz and Justice, he unleashes his bandmates on a minisuite that opens as a lush ballad and quickly evolves into a briskly swinging flag waver with tag-team solos.

“Adam has had some major accomplishments as a composer,” Patzner said. “To have an album come out where my original music is presented side by side with his is pretty awesome. Everybody in the group writes for it. It’s been really inspiring to see everybody grow as a composer.”

The Oakland-raised Patzner has a pretty impressive track record himself. He graduated from the Peabody Institute in 2007 with a B.A. in cello performance and the Grace Clagett Ranney Memorial Prize in chamber music. Along with his older brother, violinist Anton Patzner, and drummer Jon Bush, he first made his mark in Judgement Day, a string metal power trio that earned considerable renown while releasing half a dozen albums between 2002–2012.

As the child of professional musicians — his mother, violinist Carla Picchi, plays with the Oakland Symphony and San Francisco Ballet Orchestra, and his father, bass trombonist Kurt Patzner, plays with the Marin Symphony and Santa Rosa Symphony — he grew up knowing that there were many musical paths available to string players. “I was totally aware of Turtle Island Quartet and the music they were making,” Patzner said. “My mom would take me to visit her friend Irene Sazer, and I remember when Irene made an album of her own songs, more pop influenced kind of pieces.”

Cosa Nostra violist Keith Lawrence found his way to San Francisco via Jeremy Cohen’s Quartet San Francisco, a group he performed in from 2008–2012, including the Grammy Award-nominated album QSF Plays Brubeck. Hailing from a highly musical family in Pittsburgh, Pennsylvania, he was a standout out talent at Oberlin Conservatory, where he studied with Peter Slowik and Roger Chase.

Gregarious and emotionally transparent, he had a knack for attracting powerful mentors, including Quincy Jones and film composer Jack Elliott, who he met while attending the Henry Mancini Institute at UCLA during his summers off at Oberlin. A conspicuous player both due to his talent and race, he quickly found himself chatting with Q, an artist who has long prided himself on championing talented young musicians.

“I was the only Black person in the orchestra,” Lawrence said, recalling a dreamlike experience performing with Herbie Hancock, Christian McBride, and Dianne Reeves. “Quincy asked me for my phone number and I can’t say I expected a call, but when Disney Hall opened, they flew me out to play with Tony Bennett. That’s what got me into the L.A. scene.”

He’d moved to Chicago to study at DePaul University School of Music with Rami Solomonow and was gigging widely around the city playing pop and rock shows when Mancini Institute faculty member Jeremy Cohen tracked him down and invited him to audition for QSF. Lawrence ended up connecting with the Jazz Mafia via a childhood friend from the Interlochen summer program, violist Charith Premawardhana, who founded Classical Revolution.

“When one of us had another obligation Charith and I would often trade gigs,” Lawrence said. “And it came up there was a Jazz Mafia gig in Oakland that he couldn’t make, and that’s where I met Adam.”

Theis started calling Lawrence as a sub for Jazz Mafia situations, and he ended up working with Patzner and Evoniuk on occasional wedding gigs. As Theis continued to experiment with different lineups including string quartet instrumentation, he eventually dropped the second violin. Lawrence embraced the challenge “and it started becoming a thing,” he said. “We are the five nerdiest kids who wound up becoming the cool kids. I’ve never vibed with anyone on music so well.”

A graduate of San Francisco Conservatory of Music, Ashland-native Shaina Evoniuk described herself as a “recovering classical musician” looking for her own musical identity when she stumbled into the Jazz Mafia orbit. With Premawardhana once again serving as the point of connection, Theis cold-called her in 2009 to perform in his wildly ambitious Brass Bows, and Beats, an evening-length “hip-hop symphony” featuring a 50-piece ensemble that he managed to take on the road for performances at the Newport, Monterey, Montreal, and Playboy Jazz Festivals (supported by an Emerging Composer grant from the Wallace Alexander Gerbode Foundation and William and Flora Hewlett Foundation).

She ended up married to the mob (well, to Theis, more precisely), and Cosa Nostra Strings made their recording debut last year on her album Hitwoman Honey, which focused on her original tunes. In many ways the band is an ongoing experiment into applying chamber music dynamics to a volatile, rhythmically charged musical mélange that might groove, swing, strut, rock, or shuffle.

“Adam wanted to explore what these quieter instruments have in them,” Evoniuk said. “We all learned they have quite a bit of power. Instead of blasting the audience, Cosa Nostra invites the audience to lean in. We developed this sound that can be like an R&B band or a jazz band. We teamed up with vocalist Lilan Kane as her backing band at Yoshi’s and that show allowed us to go there too. Aaron Kierbel is our percussionist, and he can play cajón or typewriter. Lewis has his crazy effects pedals he developed with Judgement Day. We can go just about anywhere.”

Whether string musicians decide to become Mafia associates or not, Cosa Nostra demonstrates that there are still rich creative rewards for conservatory-trained players who venture off the straight and narrow path.

Keeping Up With the Jazz Mafia