Darcy James Argue, for Whom the Paranoia Tolls

A jazz-theater work co-commissioned by Brooklyn Academy of Music (BAM), Beth Morrison Projects, and the Fromm Music Foundation, Real Enemies premiered at BAM in 2015 as a multimedia collaboration with writer/director Isaac Butler and filmmaker Peter Nigrini. Laced with the voices of presidents, political analysts, and activists, the piece draws its name from Kathryn Olmsted’s 2009 book Real Enemies: Conspiracy Theories and American Democracy, World War I to 9/11. But it takes its aesthetic directly from film composers David Shire and Michael Small, who introduced a portentous new sonic vocabulary in 1970s films like The Parallax View, The Conversation, All the President’s Men, and The Taking of Pelham One Two Three.

“There are some Easter eggs in the score where you can see me expressly tipping my hat to those composers and that paranoid sound and atmosphere, using the dissonance and 12-tone techniques that Shire used in The Taking of Pelham One Two Three,” said Argue, who has reimagined Real Enemies as a cinematic experience for the Cal Performances At Home series, a production that premieres on Oct. 21. It will be available on demand from the Cal Performances' website until Jan. 12, 2021.

Using references to conspiracies both alleged and generously documented, like the FBI’s COINTELPRO and the NSA phone surveillance program exposed by Edward Snowden, Real Enemies is a fascinating musical hybrid. Given jazz’s inextricable, century-long engagement with American popular music, it makes sense that Argue would come to 12-tone music via Shire’s film work rather than academic composers. With a score that’s about two-thirds through composed and a sound design bristling with electronic textures, the music doesn’t need the multimedia elements to evoke a heady cinematic realm.

“It’s not minimalist,” Argue said. “There are just tiny musical gestures that suggest an entire period in history, an incorporation of silence, patience, dissonance, and little motifs just enough to suggest a ruffle that suggests a full march. These are lessons I drew from Shire and Small.”

For Argue, Real Enemies isn’t an exercise in filmic nostalgia, like a smoky tribute to film noir. The piece wascreated in response to a rising tide of distrust he sensed coursing through the country at the end of Obama’s presidency. While fascinated by particular conspiracy narratives, he and his collaborators were more interested in “the history of conspiracy theories, and how people in positions of power have exploited and weaponized paranoia,” he said.

“The fundamental thesis of the show, drawing on Richard Hofstadter’s The Paranoid Style in American Politics, is that conspiracy theories are fundamental to democracy. It’s more comforting for people to believe they’re helpless because these sinister forces control everything than to accept that history is a jumble and a mess. Chaos is more terrifying than malice.”

Argue, Butler, and Peter Nigrini conceived of the BAM production as an immersive, overwhelming experience with theatrical lighting design, some subtle choreographed movement among the musicians, and a grid of 15 screens arrayed over the orchestra. “You can’t possibly take it all in,” Argue said. “There’s the live band, and as you’re watching the musical performance, you’re also looking up at those 15 screens, which sometimes have the same images, and sometimes have 15 different things happening. It’s deliberately disorienting and overwhelming, and each person needs to decide for themselves how to make sense of it, how to construct a narrative out of all the information they’re being bombarded with.”

Unable to present the project live as scheduled for Cal Performances, Argue has done the next best thing, creating what he calls Real Enemies: The Movie. Working with producer Beth Morrison, he reimagined the production, using his 2016 album Real Enemies as the foundation. Secret Society musicians were recently filmed in studio playing their solos, footage that has been edited into a highly distilled single-screen version of the original multimedia environment.

The featured soloists are some of New York’s top improvisers, including trumpeters Seneca Black, Adam O’Farrill, and Ingrid Jensen, pianist/keyboardist Adam Birnbaum, and trombonists Mike Fahie, Ryan Keberle, and Jacob Garchik. If Garchik’s name rings a bell, it might be because the San Francisco-reared musician has become an essential part of Kronos Quartet’s universe as highly adaptable arranger (and his mom is longtime San Francisco Chronicle columnist Leah Garchik). He arranged the vast majority of the folk songs interpreted by Kronos and guest vocalists on the new album Long Time Passing, a celebration of Pete Seeger.

Seeger’s gentle earnestness offers the starkest possible contrast to the apocalyptic menace evoked by Real Enemies, which is catnip to an improviser like Garchik. “It’s really fun referencing all these old movies which I love,” he said. “Darcy taps into those 1970s sound tracks, when atonal, experimental funky music was in the mainstream. It’s pre-Hans Zimmer and pre-John Williams’s Star Wars. After that, scores had to be a very different style. Before that, Hollywood had room for deeper or weirder kinds of scores.”

Argue is hardly the only jazz artist who’s been delving into angst, paranoia, and conspiracy lately. He arranged and conducted the 13-piece chamber jazz ensemble for Ogresse, the mythic song cycle by vocalist/composer Cécile McLorin Salvant (who was awarded a coveted McArthur Foundation “Genius” Fellowship last week). They were onstage at Oakland’s Paramount Theater minutes away from presenting the work on March 11 when SFJAZZ cancelled the show due to the rising pandemic.

Talking to Salvant before the performance, she explained why she’d reached out to Argue as a collaborator on a project about an outcast monster with a taste for human flesh. “One reason I wanted to work Darcy is because he’s really good creating all these different textures and feelings,” Salvant said. “I think Ogresse is a lot about dread, and he knows how to write dread in a great way, dread and confusion and secrets.” 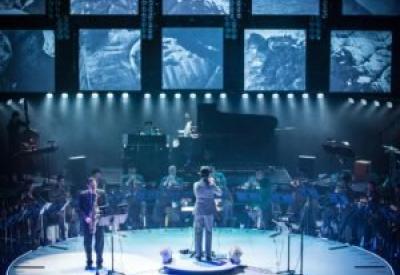 A new disc establishes the quintet as solid contributors to the Bay Area’s rich tradition of classical-crossover innovators.