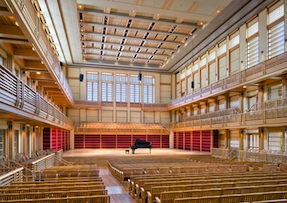 “Oh, man, you’ll die when you hear her in this place,” says Cole, sitting in the glowing blond-wood space that was closely modeled on the much-loved Ozawa Hall at Tanglewood, the Boston Symphony’s summer home in the Berkshires. It was designed by the same architect, William Rawn, and the same acoustician, Lawrence Kirkegaard, with input from the esteemed San Francisco–based theater designer Len Auerbach.

Garanča, who has never performed on the West Coast and is only singing recitals in Sonoma and at Carnegie Hall this season, is one of many stars that Cole landed on relatively short notice to launch what he considers one of the world’s finest concert halls. The centerpiece of Sonoma State University’s $110 million Green Music Center, the Joan and Sanford I. Weill Hall opens Sept. 29 with a recital by pianist Lang Lang, followed the next night by the bluegrass artists Allison Krauss & Union Station with dobro master Jerry Douglas.

Over the ensuing months, everyone from cellist Yo-Yo Ma and mezzo Joyce DiDonato — doing her only West Coast performance of her Baroque “Drama Queens” show — to Wynton Marsalis and the Lincoln Center Jazz Orchestra, and Michael Tilson Thomas and the San Francisco Symphony, will play in Weill Hall. It’s named for the financier and philanthropist (former chair of Citicorp and president of American Express) and his wife, Joan. They bought a large estate not far from the bucolic Rohnert Park campus a few years ago, tuned into the local music scene (Mr. Weill now chairs the Green Music Center’s advisory board, also chairs the Carnegie Hall board, and counts Lang and Ma as friends), and gave $12 million to finish the project.

What Else Is There but Sound (for a Musician)?

“The acoustics in here are not just great, they’re extraordinary. There’s nothing like this of this size in America,” says Cole, a spry 81, sitting in a giant shoebox that has a 53-foot-tall ceiling. It’s a warm, austere space lined with balconies and filled with chairs made of steamed beech the color of the summer hills visible through the glass wall facing east.

Cole, who’s serving as consultant to Green Music Center Artistic Director and SSU music professor Jeff Langley, had just returned from Tanglewood with his wife, Susan Muscarella, the founding director of the JazzSchool in Berkeley. They caught six concerts at the Festival of Contemporary Music, four of them in Ozawa Hall, which, like Weill Hall, opens up in the back like a barn door to bring the music to thousands picnicking at tables or spread out on a giant lawn. As always, Cole was wowed by the hall, which opened in 1994 and put Rawn on the map as a designer of concert halls and theaters.

“It’s the acoustics, the acoustics. I’m a musician. What else is there but the sound?” says Cole, a one-time jazz saxophonist who became a classical conductor and arts impresario. (He studied at Tanglewood with Leonard Bernstein in 1970, in the same class as Cal Professor Emeritus Olly Wilson.) Now he studies Russian, when he can, with a physicist who’s a music lover. “When we talk about physics and about music, we’re really talking about one thing,” says Cole, who first heard the sound waves in Weill Hall last year at a private recital by soprano Ruth Ann Swenson.

“The acoustics in here are not just great, they’re extraordinary. There’s nothing like this of this size in America.” – Robert Cole, impresario

“I was blown away. The sound of the human voice in this hall is just thrilling.”

Lang, too, was impressed. He had driven up from San Francisco late one night to check out the hall for Weill, who wanted confirmation that the place was as good as he thought. The pianist, who played a few things for a small crowd, raved about the sound.

Cole, whose long-term friendships with artists and their managers allowed him to call in favors and put together a primo season for an unknown venue, thinks the hall has to become a West Coast destination if it’s going to make it.

“To do something like this you need a vision, and that means big,” says Cole, who made some big things happen at Berkeley after taking over Cal Performances in 1986. He couldn’t get a lot of stars to come to the college town across the bay from San Francisco, where everyone wanted to perform, so he scouted out talented young artists, like Italian mezzo Cecilia Bartoli, and brought them to a wider audience. He had a knack for building relationships and putting together fresh programs that drew people to Berkeley.

“That’s what you have to do. You have to be able to make something happen that didn’t happen before, and that maybe people think can’t happen. You have to be smart enough to know that there’s something out there that people don’t know about yet, but that you’re going to bring. People will say, I have to go there if I want to hear Joyce [DiDonato] or if I want to hear Elina.That’s part of making this a destination,” he adds, like Tanglewood, Bayreuth, or the Santa Fe Opera.

“To do something like this you need a vision, and that means big. … That’s part of making this a destination.” – Robert Cole

Cole asked his friend John Adams, the composer, if he’d come up with something fresh for Sonoma’s first season. Adams offered to conduct New York’s noted International Contemporary Ensemble on Oct. 27, performing his 20-minute Son of Chamber Symphony on a bill with Stravinsky’s L’Histoire du soldat, something by Philip Glass, and a re-creation of the original jazz band version of Gershwin’s Rhapsody in Blue that Paul Whiteman’s Orchestra premiered at Carnegie Hall in 1924. The piano soloist will be Jeffrey Kahane, who returns to Weill Hall in the spring to conduct the Los Angeles Chamber Orchestra.

Other highlights of the 2012/2013 season include shows by the great Cuban pianist Chucho Valdés, mezzo Stephanie Blythe singing songs associated with Kate Smith — all rise — and the Modigliani Quartet joined by pianist Joyce Yang. The opening weekend, which brings together Lang, Kraus and company, and a sunrise Sunday choral concert with Bruno Ferrandis leading the Santa Rosa Symphony, exemplifies the range and quality of the music Cole and his colleagues are after.

“Broad-ranged, but the best,” Cole says. “We didn’t go for somebody who was on tour, we went for the best.”

Weill Hall is part of the larger Donald & Maureen Green Music Center, which includes a new music-education building and the 250-seat Schroeder Recital Hall (undoubtedly funded by the Sonoma-based family of the late, great, cartoonist Charles Schulz), which is under construction. A huge outdoor concert bowl is planned for the east side of the sand-colored, stucco concert hall, where the courtyard was recently planted with 100-year-old Italian olive trees selected by the people whose names are on the building.

The plan to build a first-rate concert hall in Sonoma wine country goes back to the mid-1990s, when Don Green, dubbed the Father of Telecom Valley, and his wife, both passionate amateur singers, began discussing the idea with SSU President Ruben Armiñana and then–Santa Rosa Symphony Director Corrick Brown. After visiting Tanglewood, the Greens knew what they wanted.

“We liken it to a New England meeting house. There’s an austerity to it, but this feels a little more to us like a modern version of that.” – William Rawn, architect

They hired Rawn, a Berkeley native who’d gone to Yale and settled in Boston, where he’s been attending concerts at Boston Symphony Hall for about 40 years. So he knows what a great hall sounds like. Preparing their winning proposal for the 1,200-seat Ozawa Hall, Rawn and his associates, who’d never designed a concert hall, spent weeks up at Tanglewood (the property once owned by Nathaniel Hawthorne), “soaking up the place, and how people moved through it,” says the architect, on the phone from his Cape Cod vacation home.

He envisioned the new hall as “a very democratic and open place. It wasn’t a snobby classical music venue but a place that welcomed everyone. You wouldn’t know if you were sitting next to a Fortune 500 CEO or a family who’d just driven cross-country.”

How to Design a Concert Hall

Rawn designed Ozawa Hall after studying the great concert halls of Europe — Vienna’s 1,700-seat Musikverein, the 2,000-seat Concertgebouw in Amsterdam, the Herman Hertzberger–designed hall in the Dutch city of Utrecht, the beloved halls in Berlin and Basel, and the 800-seat Snape Malting Concert Hall in the East Anglian village of Snape, which Benjamin Britten and the Aldeburgh Festival made from a 19th-century building used to malt barley for beer.

“The first thing I wanted to understand was the intimacy of the spaces,” Rawn says. He was struck by how “everyone was so close; how, as they say in the theater, you could see the whites of the eyes of the people in the balconies. In Vienna, the loge boxes are on the same level as the stage, so orchestra members are sitting on the same level as the audience. Everyone is sort of rubbing shoulders, metaphorically. We did that at Ozawa and at Sonoma. The audience and the musicians are coming together for a night of music. There’s a democratic spirit.”

At the 19th-century Concertgebouw, a rectangle that rises 56 feet, Kirkegaard showed Rawn the reason why the acoustics were so good: the 2-foot-thick masonry walls.

“He told me the most important things were thick side walls, which hold the bass notes in the hall. Nothing can go through them.”

Only a few years after designing Ozawa Hall, Rawn got the Sonoma gig. “We learned so much and invented so much at Ozawa. It was still fresh in our minds while we were designing Sonoma.” He gives Kirkegaard great credit for getting the acoustics of Weill Hall right, including “figuring out a way to keep the sound in the hall even when that barn door is open.”

The Shaker-like beechwood seats (which have wine-colored cushions but wooden backs), balcony railings, and Douglas fir floors provide warm surfaces for human touch, the architect says. He describes the style of the hall as “a somewhat more contemporary version of the Shaker. Ozawa Hall touches on that a little more. We liken it to a New England meeting house. There’s an austerity to it, but this feels a little more to us like a modern version of that.”

Rawn has heard a couple of performances in Weill Hall, including one by the resident Santa Rosa Symphony, and felt jazzed.

“It was very much as good as we’d hoped,” he says. “I wanted to emulate the wonderfully warm sound you hear at Boston Symphony concerts, and Larry [Kierkegaard] was on the same page. And it sounded that way.”

For Cole, the challenge is to create a dynamic program that inspires the loyal support of patrons and donors.

“If you just go for what’s going to sell tickets tonight, you’re done,” Cole says. “Because those people aren’t coming back next week, and they’re not going to write a check. You want people to come back because it’s a destination, and will write a check because they love this place. If you don’t have that, you’re out of business.”

He’s already booked most of next season, but won’t give up any names.

“It’s really killer,” he says with delight. “It’s off the charts.”