Music had nothing to do with guitarist David Tanenbaum’s decision to move from New York to San Francisco in 1976. 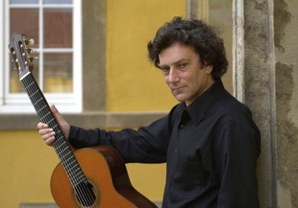 “I came out here for love. I was chasing a girl,” says Tanenbaum, a renowned performer who found a hospitable home in the freewheeling Bay Area, a gold mine of guitar players, makers, and fans. He ignored the advice of friends and family — among them his father, the late composer and Manhattan School of Music Professor Elias Tanenbaum — who told him that “you gotta be in New York if you want to be a musician.”

Tanenbaum, who married the girl he’d followed west, became a key figure in the Bay Area’s burgeoning classical guitar scene, and a leading proponent of new guitar repertoire. He’s commissioned compositions from Left Coast luminaries like Lou Harrison and Terry Riley, and premiered works written for him by Hans Werner Henze and Aaron Jay Kernis. He now chairs the Guitar Department at the San Francisco Conservatory of Music — the first conservatory in the country to offer a degree in guitar — where the faculty includes such illustrious performing artists as Sergio Assad, Marc Teicholz, and Lawrence Ferrara. Guitarist-lutenist Richard Savino, a noted early-music specialist, also teaches at the Conservatory.

A magnet for gifted young guitarists from around the globe, the Conservatory has helped make the Bay Area a mecca for classical guitar. So has the venerable series produced by San Francisco’s Omni Foundation for the Arts, which has brought the world’s greatest guitarists to town for 30 years. Focusing on classical guitar but also featuring flamenco, jazz, and finger-style players, it’s the longest-running guitar concert series in the country.

Great guitarists of all stripes, from Latin rocker Carlos Santana to the steel-string master Peppino D’Agostino, live in the Bay Area. So do a dozen acclaimed luthiers (guitar makers). They include the legendary John Gilbert of Woodside, the former chief tool engineer at Hewlett-Packard who crafted classical instruments for top artists like David Russell; Oakland steel-string guitar maker Ervin Somogyi; and San Francisco luthier Alan Perlman, who makes both classical and steel-string instruments. Another prized luthier, Greg Byers, lives up in Willits.

A Bridge to the World 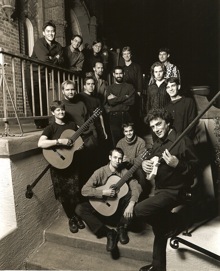 With its tradition of freedom and experimentation, “This is a place the guitar can flourish,” says Tanenbaum, a boyish 54-year-old with wavy brown locks and a sunny disposition. He was chatting in his Conservatory office, where mandolins, banjos, an old Portuguese guitar, an oud, and a Dobro hang on the wall. “The guitar comes from the Moorish invasion of Spain and all those roots, so it starts out with a multicultural basis. I think the multiculturalism of the guitar really breathes here. The sort of people who want to move to the Bay Area are kind of guitarlike people — very open to influences.”

The guitar, he went on, “is the most universal and popular instrument of our time. It is the ultimate crossover instrument. I think the freshness of the West Coast, the idea of reinventing oneself out here, merges with the flexibility of the guitar. It’s portable and very personal. You hold it, you cradle it, you touch the strings with the fingers of both hands. All of that really draws people in.”

Matt Holmes-Linder is a second-year master’s student who was drawn to the Conservatory after graduating from Wesleyan University, where he was the sole guitarist in the music department (there are 41 at the Conservatory).

“I knew David and Sergio and those guys were here, so I knew it was a good place to pursue new music, and to be in a community of artists,” says Holmes-Linder, 24, who hails from the New York suburbs of Westchester County.

“New York is the other guitar mecca in the United States,” he remarks. “There’s just as much going on here, but in a way that’s more interesting to me. The guitar world there seems centered around a few specific people and institutions. It’s a small world that’s hard to break into. Here, it seems freer. People don’t fit into boxes as much. They don’t say, ‘Oh, I’m a downtown musician,’ or ‘I’m a Yale person.’”

Holmes-Linder plays in a guitar trio with two Conservatory colleagues, Rob Nance, notable for his playing and his pink hair, and Mason Fish, who plays a seven-string instrument built by Byers. They’re among the guitarists performing new works by Conservatory composition students on a Doublespeak program coming soon. The concert consists of 22 new guitar pieces — solos, trios, and music for large ensembles, some played on arch-lute and on oud — that Tanenbaum will conduct at San Francisco’s Hotel Nikko Nov. 28, at Berkeley’s Freight & Salvage the following night, and at the Conservatory on Dec. 9.

The other day, the trio played through one of the pieces written for it by the rising young Iranian composer Sahba Aminikia. It’s a Persian dance flavored with dissonant harmonies, snapped strings, and humming harmonics.

Scratch the surface of most classical guitar players and you’ll find a one-time rock guitarist, says Tanenbaum, a former rock ’n’ roller who sees the guitar, an accessible and versatile instrument, at the forefront of the blurring of musical boundaries.

"When I started out in the classical guitar world, Segovia was dominant,” says Tanenbaum, a Segovia devotee who, like everyone else in the 1960s, listened to the Beatles. “Then John Williams came along. Segovia pronounced him prince of the guitar. They had a big falling out. For one thing, Segovia had an affair with Williams’ mother. Williams was always a very independent thinker. He joined a rock band, and completely offended Segovia. But he was ahead of his time. He foresaw the breaking down of these barriers.”

Williams performed last month at Herbst Theatre as part of the Omni Foundation’s 30th anniversary season, which continues Saturday (Nov. 13) with Brazilian guitarist Marco Pereira on a bill with the Brasil Guitar Duo. Williams was one of the artists whom Richard Patterson, Omni’s founding director, dreamed of presenting when he began producing guitar concerts in the late 1970s at the Bach Dynamite & Dancing Society in Half Moon Bay.

“I had met all these amazing guitar players in Europe, and I wanted to bring them here so we could all hear them and see what the guitar was capable of,” says Patterson, who’d returned to San Francisco after studying guitar at the conservatory in Alicante, Spain, with José Tomás, a Segovia protégé and renowned teacher.

Some major players lived here at the time, including Michael Lorimer and George Sakellariou, both of whom had studied with Segovia and were teaching at the Conservatory. The city was full of rock and folk guitarists — Jerry Garcia was a huge influence — but “there really wasn’t much classical guitar activity,” Patterson recalls.

He began presenting prominent players like David Russell, the Assad brothers, and Manuel Barrueco, who’d studied at the Peabody Conservatory with Tanenbaum and the late New Age guitarist-composer Michael Hedges, another Bay Area innovator. In 1980, with funding from D’Addario Music Foundation (endowed by the string company), Patterson formed Omni and started the San Francisco series, which showcases stars like Julian Bream and Tommy Emmanuel, as well as emerging players.

“I scout the world for the finest young players,” says Patterson, who attributes much of the series’ success to Omni’s long-standing collaboration with San Francisco Performances and its guitar-loving director, Ruth Felt.

“Without San Francisco Performances, we never would have pulled this off,” he says. “This wouldn’t have happened in a lot of cities, where they don’t have the open camaraderie and personalities like Ruth.”

D’Agostino, an Italian who came to the Bay Area in 1985 and lives in Benicia, first played for Patterson at the Bach. He’s watched the series grow in size and stature.

“Now it’s something really prestigious in the guitar world,” says D’Agostino, who can stretch from bluegrass to Bach to Brazilian music (he plays with Tanenbaum, Teicholz, and others, in the Pacific Guitar Ensemble). He was amazed at how many good guitarists lived here.

“I thought I was living in Renaissance Tuscany, in terms of guitar players,” says D’Agostino, who calls the Bay Area “a melting pot of genres.” The guitar “is an easy instrument to begin playing. You start strumming a chord and you already feel like you’re making music. In two hours you know five chords, and you can play half of Bob Dylan’s repertoire,” he added with a laugh.

Acoustic Guitar Magazine, part of the San Rafael–based String Letter Publishing, recently ran a feature on “Great Guitar Towns.” San Francisco was one of them, along with Nashville and Minneapolis (the Minnesota town has a big “roots” scene).

“The Bay Area is definitely up there in the category of guitar mecca,” says String Letter Publisher David Lusterman, a New Yorker who first came here in 1969 to study sitar at San Rafael’s Ali Akbar Khan School of Music and moved here in 1984 to marry his girlfriend. He teaches guitar at the String Letter Music School in San Anselmo, where the faculty includes D’Agostino and Alex de Grassi, another famous Bay Area acoustic guitarist.

You might run into them at the biennial Healdsburg Guitar Festival, a huge event showcasing hundreds of luthiers and guitarists, or at Guitar Solo on San Francisco’s Townsend Street. That’s the retail store of Guitar Solo Publishing (GSP), which has the largest selection of classical guitar sheet music in the country, if not the world. GSP ships music around the globe; publishes music written or transcribed by guitarists like Lorimer, Assad, and Paulo Bellinati; and puts out CDs by a wide range of artists, including Tanenbaum and jazzer Bruce Forman.

“I think of myself as a classical guitarist,” says Tanenbaum, who will play one of two steel-string guitar parts in John Adams’ El Niño at Davies Symphony Hall Dec. 2-4, as part of Project San Francisco, a composer and artist residency program. “But it’s become a much broader term.”