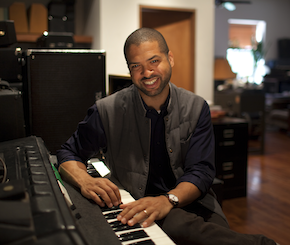 The first time I heard pianist Jason Moran perform with his band live, a decade or so ago, I was startled to hear a repeating tape loop (a technique he’s used elsewhere) of sampled voices, straight out of Steve Reich, kicking off his band’s performance — not the way the typical jazz concert begins. For Moran, minimalism is simply a major sound of our time.

“A lot of my aesthetic comes from that, what great repetition can do,” Moran explains. “But that music is not defined simply by musical instruments. I’m releasing this notion that sound has to be from an instrument. Those ideas are in Robert Rauschenberg, Reich, [Brazilian jazz composer Hermeto] Pascoal, the Fluxus movement, conceptual art, Sol Lewitt — artists show who they are in showing the environment that surrounds them. I wanted to make sure my music had this imprint in it.”

Though rooted firmly in the jazz tradition — he looks to Thelonious Monk the way many classical musicians look to Bach or John Cage — Moran has never let that category pigeonhole him like so many jazzers who seem content to replay the music’s midcentury glory years. He’s simply one of the country’s most creative and appealing musicians of any kind. Like Duke Ellington, Moran is beyond category.

On Thursday in SFJazz’s Chamber Jazz series at Miner Auditoriaum, Moran joins the classical wind quintet Imani Winds in the West Coast premiere of his latest piece for “classical” instruments, Jump Cut Rose. The ensemble will also play Cane, an earlier quintet Moran wrote for them, and music by two of Imani’s own members as well as an arrangement of Igor Stravinsky’s landmark ballet score, The Rite of Spring.

Growing up in Houston in the 1980s, Moran started studying classical piano at age six, but hearing Thelonious Monk’s classic “Round Midnight” as a teenager sent him on the jazz path, which he pursued first at Houston's High School for the Performing and Visual Arts and then at the Manhattan School of Music.

His pianistic skills caught the attention of saxophonist Steve Coleman, who hired him for a tour. From there, Moran’s compositional skills quickly set his career soaring, leading to recordings (eight and counting on the famed Blue Note label as a leader, and a dozen as a sideman), tours, commissions (from the San Francisco Jazz Festival, Jazz at Lincoln Center, Monterey Jazz Festival, Chamber Music America, and San Francisco’s Other Minds Festival, where he was a resident composer in 2011), and a slew of honors, culminating in DownBeat magazine’s Jazz Artist, Pianist, and Album of the Year in 2011, and a MacArthur “Genius” Fellowship in 2010. Moran serves on the piano faculty at his alma mater Manhattan School, jazz adviser for Washington’s Kennedy Center, and next week completes his run as co-artistic adviser of the San Francisco Jazz Festival.

But through all his jazz triumphs, Moran never lost touch with classical music. “At the Manhattan School, all jazz students were forced to take western classical music history,” he recalls. “Unfortunately, classical students weren’t forced to take jazz history. Once I graduated, I invested a lot of time seeing pieces at the New York Philharmonic,” citing (as many jazzers do) a special affinity for French impressionist composers.

Moran had a more personal reason for delving into classical music: His wife, Alicia (with whom he has twin children) is a classical singer. “After meeting my wife, I realized I needed to know Schumann, Berg, Prokofiev, and the rest,” he says. “Alicia started to work on a lot of art songs, German lieder, and so on, and I started to play some of them with my band, so it started to blur those lines between classical and jazz. I thought about how people deal with the blues around the world. In Alexander Nevsky, Prokofiev knew how to tap into the sound of the blues. My fellow jazz musicians have been playing classical music forever, like Duke Ellington playing Grieg. It’s a constant mining of the repertoire.”

“We have a distinct advantage when working with someone who’s not used to composing classical music: We have two composers who can powwow with him.” — oboist Toyin Spellman, Imani Winds

In fact, Moran had composed for “classical” forces as far back as his senior recital in college, when he wrote his first through-composed piece, which he performed with his fellow student, oboist Toyin Spellman. Moran followed her career as Spellman went on to become the oboist for one of the most popular, accomplished and forward looking chamber ensembles in contemporary classical music, Imani Winds.

Since 1997, the wind quintet has mixed classical, jazz, and world music, much of it contemporary, some composed by group members. As a result, their concerts regularly attract large, ecstatic audiences that are younger, more varied, and more engaged than just about any others in classical music. The ensemble’s increasing acclaim has produced Grammy nominations, world tours, performances at all of America's most prestigious classical venues, and five recordings.

Their most recent, Terra Icognita, features one of the group’s signatures and a major reason why it appeals to younger listeners: contemporary music. “That’s what we're most proud of,” says Spellman, “expanding the repertoire by adding new sounds, like the premieres by two different jazz composers, Wayne Shorter and Jason Moran on our new album. Imani Winds is constantly listening to new composers.”

Moran’s contribution to that 2010 album was a four-part suite called Cane. “What I appreciate about Imani is that they beef up their repertoire by commissioning a series of works specially written for them, and they’ve created a beautiful catalog,” Moran says. “So when they approached me about Cane I was frightened but happy that they consider themselves guinea pigs for the shortcomings of people’s compositional skills,” he chuckles.

Since he’d never written for classical wind quintet, Moran knew he’d need to work closely with the group. “He was really open to listening to what we had to say,” Spellman remembers. “We have a distinct advantage when working with someone who’s not used to composing classical music: We have two composers [flutist Valerie Coleman and hornist Jeff Scott] who can powwow with him. We played through his ideas, and as we worked with him over the months the piece really changed, metamorphosed and got better.”

“It was a beautiful process working on Cane,” Moran says. “It allowed me to realize different aspects of my music. One of the biggest components of my music is mixing rhythms around. So when the rhythm needs to get cooking, how do I write that down? How would I translate that to someone else? It was like after you’ve learned to walk, then someone gives you a puppet, and you actually have to learn how to manipulate the arm, pulling the strings. Now I had five fingers that move in a very different way than I move as an improviser. So it was going through that process, how to give phrases to Valerie to play on flute or Jeff on French horn.”

So excited was Moran by the results that he resolved to write for the group again. And next time, he told Spellman, “I’m gonna play with you.”

“I think America has to come to grips with its relationship to the arts. Music was for people, art was for people, so how come everybody doesn’t feel invited to museums, art galleries?”    — pianist/composer Jason Moran

His new sextet, Jump Cut Rose, which receives its West Coast premiere this weekend at Miner Auditorium, shares “connective tissue” with its predecessor, Moran says. “Some of the rhythmic threads come out of Cane,” but Jump Cut Rose is different,” and not just because Moran is indeed playing with the Imanis in it. “There’s no improvisation in Cane. Now, I'm that one who gets to take the ingredients they're playing as we’re in the middle of the piece, and improvise interludes as we’re playing. I thought, ‘because I'm playing, let's breathe on it this way.’ It’s nice to play with them.”

The group worked with Moran at his Harlem studio on the new sextet, whose title refers to the film editing technique that involves abrupt jumps between unrelated scenes. “I’m looking at spaces of melody that may not have anything to do with each other landing next to each other. Sometimes I’m the connecting thread, sometimes not.”

Besides Moran’s Cane and Rose, the Miner program also includes Imani flutist Coleman’s bluesy Red Clay and Mississippi Delta, hornist Scott’s Homage to Duke and Startin Sumthin,’ and the group’s sparkling centennial quintet arrangement of Stravinsky’s The Rite of Spring, which Imani has been touring for the past couple of years.

Imani and Moran’s collaboration is a part of their shared, larger effort to break down the barriers between two increasingly marginalized genres of music — classical and jazz. “One of the first first conversations I had with Imani was about Gyorgi Ligeti’s Bagatelles for wind quintet,” Moran remembers. “Hearing that music with contemporary jazz made me realize that there was a lot of blur, a common language” shared by jazz and contemporary classical composers. So while their collaboration may initially seem like a jump cut, it’s really a shared vision.

Moran and the Imanis also share a commitment to breaking down other barriers between these so-called art musics and listeners. “I think America has to come to grips with its relationship to the arts,” he insists, and that means dealing with class issues Americans are reluctant to discuss, and bringing music to listeners outside major metropolises. “Music was for people, art was for people, so how come everybody doesn’t feel invited to museums, art galleries?” he asks. “How does that conversation get outside those walls? To have something happen in that space so people feel ‘I can go in there now,’ we have to take things out of the institutions, out of the concert halls, even if the sound might not be as perfect.”

Spellman and the Imanis agree, and like Moran, they’re working to bring music to younger and nontraditional listeners through various programs. And maybe barrier-busting new musical collaborations like this one are part of the answer, too. “Around the country, we're seeing people realizing the traditional canon isn’t flying anymore,” Spellman says. “We’re seeing educational institutions pushing boundaries, training students to relate to audiences in the 21st Century. We also see people of color — a lot more people who look like us — in audiences even for traditional classical music concerts. I think it’s on the right track.”