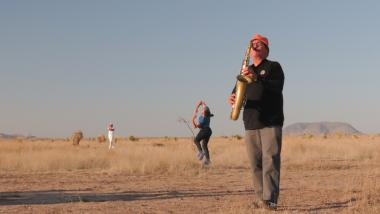 In an interview in the late 1990s, the late choreographer Merce Cunningham gave me one of his favorite stories about the creative process leading up to the presentation of a new piece. While he was in Connecticut blocking out what became his classic 1958 dance Summerspace, he explained that Robert Rauschenberg was designing the décor sight unseen in South Carolina and Morton Feldman was off by himself in New York composing the music. “A friend of Marty’s asked him how it could all come together,” Cunningham recalled. “Marty said, ‘Suppose your daughter’s going to get married and I tell you that her wedding dress won’t be ready until the morning of the wedding, but the dress is by Dior.’”

It’s a wonderfully droll account that employs glamor to hide more than it reveals about the nature of Cunningham’s collaborative process. The connective tissue linking these artists grew out of mutual confidence and shared aesthetic values, human factors that become even more important when the act of creation unfolds in front of an audience in real time. As far as I know, no Dior dresses will be onstage at ODC Theater May 19-20, but there will be plenty of trust and emotional connection when dancers Rashaun Mitchell and Silas Riener interact with saxophonist Phillip Greenlief, koto explorer Shoko Hikage, and poet/ critic Claudia La Rocco.

Presented as part of ODC Theater’s Walking Distance Dance Festival, which runs from May 15-20, the performance is billed as An Improvisation and framed by the festival as a revelatory act of freedom. “We live in a world that is densely populated with repressive systems of control,” the program says. “Free improvisers offer an alternative — to gather from diverse cultures and create compelling and beautiful work with no plan, no pre-arranged agreements.”

It’s a description that hides as much as Cunningham’s Summerspace account, emphasizing the lack of design rather than the creatively charged relationships embodied in the piece, which emerges out of a tangled skein of friendships and a variegated history of performances. In some ways, Hikage, a vital force on the Bay Area improvised music scene since 1997, is the wild card in a project that brings together two couples made up of partners best known for their individual work.

A poet, performer, and veteran arts writer who covered dance and theater for The New York Times (and continues to contribute stories to the paper on theater and literature), La Rocco met Greenlief in 2013 when they were both artists-in-residence at the Headlands Center for the Arts. Greenlief had a long history of creating music inspired by literature, but by the time they connected he’d decided he wasn’t interested in collaborating with departed artists in “a one-way conversation,” he says. “I’m modeling something on something that already exists. But wouldn’t it be great to collaborate with a living writer?”

He found an ideal partner in La Rocco, who had been honing her immediate-response pieces by writing while watching a performance and publishing the unedited text on her website. After several smaller textual projects, Greenlief and La Rocco started to perform together in Animals & Giraffes, a duo that often includes other musicians who join Greenlief in creating sonic settings encompassing La Rocco’s impromptu recitations. Longtime friends with Mitchell and Riener, who met as members of the Merce Cunningham Dance Company, La Rocco brought Greenlief together with Mitchell when they were on a program in New York City reading excerpts from her science fiction novel petit cadeau. “We were both smitten with each other’s work,” Greenlief says.

He wrote a grant to the San Francisco Friends of Chamber Music (now InterMusic) and received funding to perform with Mitchell and guitarist Fred Frith at The Lab in 2016, an improvised performance that was captured on video and released on DVD by Relative Pitch Records. Riener got into the act during a Judd Foundation residency in Marfa with La Rocco, Greenlief, and Mitchell, a performance that made full use of the West Texas expanse.

Performing at ODC Theater offers a very different spatial challenge and “the space always influences the improviser,” Greenlief says. The audience can profoundly shape a performance too, particularly when it comes to La Rocco’s text. She’s been known to draw some of her text from overheard conversations taking place before a performance, or to respond directly to what her collaborators are doing around her. “To somehow have the words registering what’s going on in the moment is really exciting,” Greenlief says. “You can’t get [that] if you’re writing for [an] Emily Dickinson poem. You never really know what’s going to happen, and that’s part of the fun.”

It's hard to overstate Greenlief’s contributions to the Bay Area arts scene, though his indifference to self-promotion means that he can usually be found playing in intimate spaces rather than Yoshi’s or the SFJAZZ Center.

But rather than defining his music via a particular band, Greenlief has spent his creative life honing a vast international web of relationships. As a collaborator, curator, composer, and proprietor of Evander Music, a label that released dozens of albums that captured the roiling creativity of the Bay Area scene in the 90s and aughts, he’s played an invaluable role connecting the region to other cities’ scenes.

Bassist, composer, bandleader, and multimedia explorer Lisa Mezzacappa has collaborated with Greenlief in several projects, most memorably in the sadly unrecorded trio Citta da Vita with drummer John Hanes, which was dedicated to a ravishing, spacious, and angst-ridden set of tunes the saxophonist composed inspired by the films of Michelangelo Antonioni. A native New Yorker who moved to the Bay Area in 2001, she says that Greenlief “is one of the people who taught me how to be an artist, Phillip and the ROVA guys and Gino Robair. Something about how they operate as Artists with a capital ‘A’ resonated so much. You can talk to them about anything going on in the cultural realm, and there’s so much knowledge about film, dance, and poetry. Music is their medium, but that’s just how the process all this inspiration. Phillip is a charismatic linker of people, and he taught me about generosity, about sharing connections and making connection. That’s how you operate.”

He’s got seven albums on the front burner that will be released in the coming months, including a duo project with drummer Scott Amendola, a duo album with pedal steel guitarist Susan Alcorn, and Barbed Wire, a project featuring four different trios, plays his graphic scores.

“I feel like I’ve been composing a lot and the work hasn’t been represented,” Greenlief says. “Right now, I’m trying to gather all this stuff, and it feels like my music is about to take another turn. Sometimes it’s good to assess where you are before you step forward. I love playing free improv with a lot of different people, but composing has been a really important part of my work.”

ODC and choreographer Brenda Way jump into the #MeToo moment with a deeply felt and powerful dance.

A round-the-world tour in dance celebrates its anniversary.