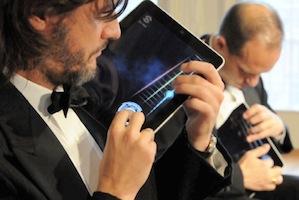 iThink iCan: Is Apple in Tune With Classical Music? 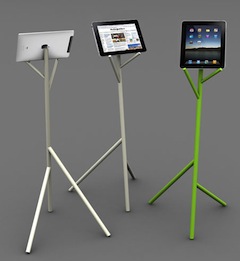 In the few weeks following the release of the iPad 3, Mac users across the board have been weighing in on the device’s improvements — a shiny new retina display, updated music software, a built-in camera that actually works. However, professional musicians, especially in the classical field, haven’t been asked about the iPad much: Maybe we’ve mentally already sent them to stand in the technophobe corner. But reality, as usual, is surprising.

Change is happening in classical music. Classical musicians — the Borromeo String Quartet, Kronos Quartet, composer Mason Bates, among many others — are already using the iPad and other mobile devices when making their music.

“Can you hear that?” says electronic music pioneer and composer Morton Subotnick as he plays on his new musical drawing app for iPad. “That’s just drawing. It’s like finger painting. Then you can get [kids] to play. It’s [designed] for kids from 2 years old up, and you can erase it. So for music, if this were a ride, it would be like it was a piece of music. Or you play it as you do it. You can also do ‘scrubbing’ as if you were DJ-ing. And now I can take that same [snippet] and go to Africa with it and it’ll give me African instruments in African scales.” The app, named Making Music: A Pitch Canvas, will be released next month.

Simply Connect: The Rise of Social Media in the Arts

Can You Hear the Music Now? After Volume Won

Known for cofounding the San Francisco Tape Center and the California School of the Arts in Los Angeles, as well as for Silver Apples of the Moon (1967), a groundbreaking electronics piece commissioned and recorded by Nonesuch Records, Subotnick (b. 1933) now teaches a composition seminar at New York University. He views technological development with a wide philosophical perspective that is unusual in discussions of “the next big thing.”

“A lot things you already know how to do you’re now doing with the iPad,” he says. “Sometimes it gets better. Sometimes it isn’t any better at all. It’s just that the iPad is more fun. But eventually you begin to develop a whole new way. Think of Facebook and [social networking] … people didn’t need that when the computer first came out,” he says. “Gradually, we began to think of things that technology seems natural for, but we never thought of doing them until we had it. The iPad is moving quickly because it’s worldwide at this point. My guess is that you’re going to see a lot of new kinds of ideas coming out.”

The latest quarterly earnings report from Apple confirms Subotnick’s point. Whether or not we can really make maximal use of them in our professional lives, a good many of us own an iPad: almost 12 million of them were purchased over the last three months.

“The iPad is moving quickly because it’s worldwide at this point. My guess is that you’re going to see a lot of new kinds of ideas coming out.” — Composer Morton Subotnick

“Everything is going mobile. I definitely see Apple continuing its push to offer more solid music recording and editing software for iPad, iPhone, and MacBook Air users,” says Wired Magazine contributor Christina Bonnington. “Apple is also keen on offering solutions for different user levels, making sure that their product is basic enough that an absolute beginner could pick it up and start making music, while packing in enough advanced features that a semiprofessional or professional musician could get some utility from.” 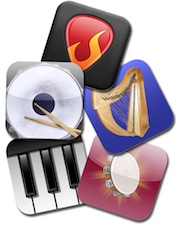 Granted, music editing software and even some apps are better than they used to be. But while musicians and industry buffs occupy themselves with apps such as Sound Hound, Turntable, or even the I Am T-Pain app (which makes your voice sound like that of rapper T-Pain), or with mastering Pro Tools, do classical composers get anything out of the new iPad?

Composer Matthew Cmiel, for one, owns an iPad but finds his creativity flows through a pencil.

“I do most of the stuff myself. I improv and I write things by hand, and I think a lot about structure and pacing and timing, etcetera,” says Cmiel, who is also director and conductor of the San Francisco School of the Arts Orchestra. “Then at some point, I’ll start moving to working on the computer, using my laptop at [that] point for most of my scores. I will usually copy my [music] into a PDF [file], store it on my iPad, and use it to show around to people [so I can] engage, so I don’t have to carry around so much music.”

Although many musicians are open to learning how to use the latest music tools — Avid Technology’s Pro Tools is the industry standard for sound editing and mixing, while Sibelius, by the same developer, is favored for graphic notation — classical composers and musicians aren’t yet using music software en masse. Despite these tools’ general usefulness, questions still linger about their flexibility and how they address the specific needs of composers.

One of the qualms involves the number of default settings and presets in popular programs like Apple’s GarageBand or Sound Design. Does that foster a dependence on the tool rather than the creative process?

“[Student composers] don’t have an understanding of how things actually will sound or work. They trust the computer too much to figure it out for them. That’s certainly a concern I have with technology,” says Cmiel. “If you’re holding a hammer, then every problem in your house can be solved with a hammer, somehow.”

Although a big fan of technology’s problem-solving power, he feels a certain anxiety about letting students learn their craft with these powerful programs. “Students don’t always know [about] these automatic settings. When someone hands me a score, I can tell whether it was made on Sibelius or Finale in all of .02 seconds because they don’t change any of the presets,” says Cmiel. “A lot of pieces start in 4/4 [time]. And they all start in quarter note = 100, [Sibelius’ default], which is a really inorganic tempo. People are letting the program limit the way they can be creative themselves.”

Subotnick, by contrast, sees the problem as being preconceived notations, about both technology and music:

A student was making a presentation and he was describing his process. He said, “Well, I had to decide whether there was going to be dissonance, or I had to decide what kind of modality or scale I was going to use and what the general shape and form of the piece was.” And when he got finished I said, “Well, you know, by talking about tonality and consonance and dissonance, you already have an image of using traditional instrumentation and traditional forms.” And he hadn’t actually thought about that.

What I’ve been trying to introduce is sort of rethinking things and really breaking down the barriers to going back to the beginning and rebuilding. That’s why I’ve focused on little children’s programs: because at that point everyone, including adults, can see “Oh, that’s where we were before we had all these preconceptions.”

No one program or tool can meet everyone’s needs. Remember that the technology is challenging methods of music production that, though labor intensive for sure, have built in flexibility through millennia of innovation plus trial and error. That’s why the new iPad and music software can’t yet meet all the needs of the classical composer. They’re young technologies, but ones that have already covered a lot of ground.

The new iPad and music software can’t yet meet all the needs of the classical composer.

“Apple is known for simple tools — simple and powerful tools. But [Apple] is not keen on bells and whistles,” says Mason Bates, a successful young composer who also DJs under the name DJ Masonic — rare but cool. “These programs are not flexible ... if there were more flexibility, it wouldn’t come from Apple. It would come from elsewhere.”

Subotnick thinks it’s only a matter of time before people find the workarounds or create their own possibilities.

“What I think is missing is imagination that would include [music software],” says Subotnick. “There’s nothing wrong with the iPad. The reason it hasn’t entered into so-called serious [music] — it’s not a problem with the iPad. I think the iPad has a definite place. I was just talking with a large ensemble, [about] a commission for three years from now, to do a piece where these expert musicians will be able to play with them through the whole piece.”

What composers like Cmiel are looking forward to are programs that function not only across platforms but also across other music editing programs. Currently, editing programs don’t “talk to each other” and often impose their own formats before their products can be transferred and sent, which can cause difficulties if a piece has been crafted with more than one tool.

“What I’d like to see [is] some sort of family of software that is highly integrated but also individualized so it doesn’t feel like you’re running the same software,” says Cmiel. “Just a very traditional way of going back and forth [between programs], going from designing your own MIDI sounds immediately to producing your own [MIDI] orchestra to creating a new score and from there to creating graphic notation where people [can] get a hold of your score. I would like to see those all separate but linked, if that makes sense. I would like them to [be able to] run on different operating systems, because that way they would not overlap so much.”

But perhaps, as Subotnick says, the iPad is merely the platform: one more opportunity to reevaluate your assumptions:

“I found my own voice just because it was a pretty clear road,” the composer remarks. “There was nobody else doing what I was doing. Now, there are people — it’s hard to find something that nobody is doing. So you really have to search. There’s so much to choose from. That almost produces the opposite kind of challenge. But the word challenge doesn’t necessarily mean bad. It means, How do we solve this problem? And the problem is wonderful.”