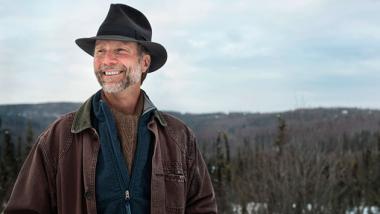 For decades, composer John Luther Adams labored in the wilderness, both figuratively and literally. During the 1980s and ’90, his music primarily engaged a small audience, released on tiny but influential labels like Los Angeles’s Cold Blue. Adams lived much of that time in a remote Alaska cabin that lacked running water, toting wood and water each day, a mile from the only road in the area.

Much of his music — “strange and sacred noise,” to use the title of one of his major works — was written for percussion and other small ensembles, and embraced environmental themes and even sounds, evoking nature through music that shunned conventional narrative and dramatic forms.

Inspired by his mentor, composer Lou Harrison, Adams avoided graduate school, day jobs in the music world, study with well-known mentors who might have advanced his career. (He graduated from Cal Arts in 1973 after studying with the important maverick composer James Tenney, and with Leonard Stein.) “More than anyone else, Lou was my role model for making the wrong decision, which was the right decision, again and again and again,” he said. “It was about making a life, not making a career.”

He was never really a hermit and maintained involvement in various music organizations. But even after moving to less spartan surroundings outside Fairbanks, except for occasional forays into concert halls and academic residencies, Adams seemed content to live on the margins of the musical world, close to the natural sources of his inspiration, writing music of depth and power.

Gradually, Adams’s music and prominence spread. A series of moving, beautiful works in the 1990s netted recordings, rapturous reviews, and garnered their composer increasing awards and acclaim. No composer has been more successful at using sound and music not just to portray place in a sonic way, like a realist painter or photographer, but also to make listeners feel the emotion of being there. Now, he’s no longer likely to be confused with that other West Coast Adams, John Coolidge.

Adams completed his move from the margin to the mainstream over the last year or so. After four decades in Alaska, he and his wife, Cynthia, moved to New York City — about as distant from their Northwest isolation as imaginable. And in November, his magnificent orchestral work Become Ocean won Adams the 2014 Pulitzer Prize in music. Although I’ve been hearing Adams’s music in concert and on record for at least two decades, at a live performance by the Seattle Symphony (which commissioned, premiered, and recorded it), I saw the piece move classical music veterans and newbies alike. Clearly, the wider world has come to Adams’s music.

This weekend, the San Francisco Symphony plays what Adams calls “a prototype for a lot of my music including Become Ocean.” That 1998 work, The Light that Fills the World, is “a bit of a homecoming, too, because it was commissioned by Paul Dresher and its first performance was at Yerba Buena Center with Paul’s band,” Adams recalls. “I was under the spell of these vast, seemingly empty landscapes, the tundra, or the frozen Yukon river delta. I was also just completely taken with Alaska and Barnett Newman and color field painting — art in which there’s apparently nothing, but that seems to resonate so deeply. I wanted to do something like that in music, take everything out, remove all the lines, and have these floating fields of musical color.”

We’ll be able to hear Adams’s more recent music at this summer’s Ojai Festival and its Berkeley counterpart, Ojai North which will feature the West Coast premiere of Sila. International Contemporary Ensemble (ICE) will also perform Become River, and next fall, new works will be performed in Los Angeles and San Diego.

But now that he’s left “the place where you go to listen” and “the place we began” (two other Adams opus titles), the cradle of so much of his music, what’s next for John Luther Adams and his music?

The Challenges of Change

Lou Harrison’s career followed a similar arc. After becoming one of the country’s most promising young composers in San Francisco and then New York City, Harrison fled what he called “the chattering of the metropolis” for an isolated cabin in the Santa Cruz mountains, shunning major academic opportunities in order to focus on his own strange and sacred sounds that embraced ancient tunings and non Western cultures. When fame finally did catch up with him in his 70s, the attention proved a mixed blessing, as Harrison — besieged by attention and adoration from journalists, students, orchestras, chamber ensembles, and the rest, which he appreciated — had to build his own isolated escape hermitage in the Joshua Tree desert.

The downsides of fame worried Adams less than abandoning his longtime home base. “It was more than a little frightening to think of leaving,” Adams admits.

Who would we be if we weren’t Alaskans? As we talked about leaving, friends would ask me ‘Aren’t you afraid you’ll lose your muse, your inspiration? This place has been your touchstone.’ Of course I’d wave them off but the truth is, yeah, I was really worried about that. It’s been exciting to begin to establish a new home down there [in Mexico] and have all this new music coming out from that new place. Part of it is feeling like a beginner, learning new plants and birds and weather and light and the desert is just an enchanted garden and then the front yard is the Pacific Ocean, this terrifying, vast wilderness to us landlubbers from Fairbanks. It’s been really exciting to discover a new place.”

That excitement has emerged in the music. “The last two to three years have been explosive creatively,” Adams explains. “Sila, Become Ocean, a big choral piece called Canticles of the Holy Wind, Become River for chamber orchestra — all these pieces were written primarily in Mexico, so that’s a good sign. But I’m not sure I can characterize the changes [in his music] recently as having anything to do with the changes of landscape. It’s just a continuation of what I’ve been doing all these years, but with a new sense of energy and discovery. I think the changes are happening in the music because the music wants them, not because I want them or I’ve moved. The music has a mind of its own, a current of its own that I can’t anticipate and push around. I just try to understand them and try and follow.” It’s a philosophy that reflects Adams’s own sense of the natural world that’s something to be respected and adapted to, rather than reined in and controlled.

In fact, Become Ocean owes as much to Adams’s earlier works as to his new vistas. He points especially to 2007’s Dark Waves, which evoked “a cold water, North Pacific, Bering Sea kind of world,” he says. “I didn’t realize it at the time but I quickly understood it was a study for something larger, which turned out to be Become Ocean, where the scale becomes larger but also the colors become brighter, both in the orchestration and the harmonies. Maybe that’s a subtle difference that comes from the desert light and all the sunlight down there reflecting off the water.”

Dark Waves used electronics as well as acoustic orchestral instruments, revealing how Adams’s non-orchestral works influence his music for conventional classical forces. Like many of his finest works, both pieces aspire to what the composer calls “sonic geography,” using music and non-musical sounds (including recordings of actual sounds and narration, but also sounds produced by musical instruments using extended techniques) to create an aural portrait of a place and time.

“There’s this wonderful process of moving back and forth between media,” he says, noting how the scale he achieved in his 2006 electronic soundscape Veils “encouraged me to go outside to find a larger physical space in which to realize this [in Inuksuit] and also influenced Become Ocean. Can I hear something like that indoors, with human musicians? They do inform and transform one another."

The Breath of the World

Adams came to Alaska in 1973 as an environmental activist, heading an organization that helped win passage of the largest legal protection of natural landscape in history, the Alaska Lands Act, in 1980. “I look back on that with this deep sense of satisfaction,” he recalls.

I would not trade that for anything. But there came a time when I realized that I couldn’t have the temperament or the courage, quite frankly, for a life in politics. I came to the conclusion that someone else could probably carry on my role in the environmental crusade but no one else could discover the music that I might be able to find. So I rededicated myself to my art. I did it in the belief that music could matter as much as politics, maybe more so. In recent years I’ve come to believe that music matters more fundamentally than politics. And yet I don’t make political art, I don’t make political music. To my ears and mind, political art fails as politics and fails as art, and to be of greatest use to us, art must be itself first and foremost. I can write all the program notes I want, hang the most provocative titles on my pieces, but if the music doesn’t resonate as music, all the extramusical associations mean nothing.

“I can have it both ways. My music can derive from the world we inhabit, the only world we have — and at the same time exist as music.”

That music continues to pour forth, regardless of where he creates it. This spring, the Adams’s will visit Alaska for the first time in two years. “I’ve kept my studio and we’ll see how it feels,” he says. “It’s home and it always will be. But we also feel at home here [in New York] in a funny way and we feel deeply at home in San Juanico. We have three homes.”

Recently, a major Ivy League university offered him “the sun, the moon, and the stars” — a comfortable faculty position. And even though, since his death in 2003, “Lou’s number is now unlisted,” Adams asked himself what Harrison would have done — and turned it down. He may no longer be living on the frontier, but wherever he’s creating music, John Luther Adams remains a pioneering musical maverick.