Journey Into Faith: The Creation of Holy Sisters 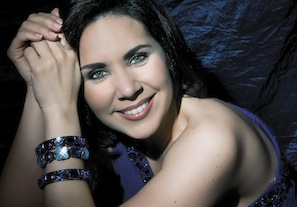 Conductor Joana Carneiro received a singular wedding gift last September when she married José “Ze” Goncalves in her hometown of Lisbon, Portugal. The splendid soprano Jessica Rivera, a close friend and collaborator, and a string quartet comprising four of Carneiro’s eight siblings, performed a simple, hymnlike wedding song composed by another close pal and colleague, Gabriela Lena Frank. The biblical text was picked by the groom. Hatched in secrecy, the song and the performance floored the bride.

“It was a wonderful surprise. The music is so beautiful,” says Carneiro, the Berkeley Symphony’s vital 35-year-old music director. “To have my husband and two great artists come up with this idea, to have my family involved, and to hear the way Jessica sang it — I was just overflowing with joy and emotion.”

Carneiro was so taken by O anjo annuncia (The angel announces) — it speaks of the Angel Gabriel telling the Virgin Mary that she will give birth to Jesus — that she asked Frank if the composer could incorporate the song into Holy Sisters. That’s the Berkeley Symphony–commissioned piece about biblical women that Frank was writing for Rivera, the San Francisco Girls Chorus, and a chamber orchestra. Frank obliged, and ended up making the song the core of Part 1 of Holy Sisters, which premieres April 26 at Zellerbach Hall. (Part 2 premieres next season.)

From Song to Idea and Back Again

The opening melodic line and word of Holy Sisters, “Salvé” (a salutation meaning “hail”), come from the wedding song. The line is sung by Rivera, followed by the chorus, in phrases that echo and fade. The song later appears in its entirety, partly sung in an intimate setting with just string quartet. 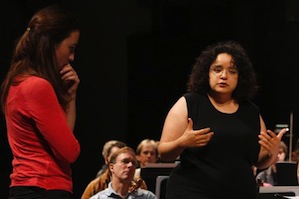 The text for this lyrical 22-minute work was written in English by the noted Portuguese poet and priest José Tolentino de Mendonça, a Carneiro family friend who conducted Joana’s wedding. Rivera portrays five biblical characters: Sarah, Rachel, Miriam (Moses’ sister), Hannah (Samuel’s mother), and Mary of Magdala. Tolentino mixed biblical text with his own poetic language. Frank got the padre’s blessing to tweak some of the words to make them more singable, and “fray his poetry among different voices,” she says.

A deeply religious person, Rivera had suggested the piece to Carneiro while serving as the Berkeley Symphony’s artist in residence during the conductor’s inaugural 2009–2010 season. They’d first performed together in 2005, doing Handel’s Messiah with the Los Angeles Philharmonic Chorus, when Carneiro was assistant conductor to Esa-Pekka Salonen (whose composition Five Images After Sappho Rivera sang with the Berkeley ensemble in 2009). They later performed John Adams’ A Flowering Tree in Paris with the Gulbenkian Orchestra, and at Cincinnati Opera.

“I’ve always been intrigued by the women in the Bible, how they were portrayed in the stories and the history of the world,” says Rivera, on the phone from the Middleton, Ohio, home she shares with her husband, Barry Shafer, a seminary-trained writer whom Frank consulted on biblical matters.

“I wanted to highlight their stories in a way that shed light on their experiences,” adds Rivera, who speaks of the sorrow, defiance, and rejoicing of women who “had to have faith in order to bring about things that we would call miraculous.” Sarah laughed when God told her she’d finally bear a child at 90, adds Rivera, who says she’s experienced a miracle in her own life that she attributes to prayer: A hemorrhagic nodule on her throat vanished without surgery. “It’s such a special thing to be able to bring these stories to life with the gift that I have been given — music.”

Digging Into Stories of Faith

“There’s going to be a lot of estrogen on the stage, but it’s friendly estrogen,” says Frank, laughing. A curly-haired live-wire with a quick mind and earthy sense of humor, she’s sitting at the kitchen table of her tidy North Oakland bungalow. A taiko drum sits in the living room, with a grand piano. She composes mostly in her head, working in the upstairs studio where sheets of manuscript paper, along with a fingering chart for the Peruvian pan pipe, are pinned to a bulletin board. (Among other things, she’s writing a piece for the Del Sol String Quartet and the Andean folkloric group Chaskinakuy, as well as commissioned works for the Philadelphia and Cleveland orchestras.)

Neither a Bible reader nor a member of any religious congregation, Frank, whose father is of Lithuanian Jewish ancestry and whose mother is Chinese-Peruvian, knew people in Berkeley who were Taoists or who practiced Shinto. But she says she didn’t meet a devout Christian until she moved to Texas to study at Rice University. She embraced the challenge of writing a piece about biblical characters to verse by a poet she’d never read.

“I consider myself loosely spiritual and a moral person,” says the composer, “but what attracts me about all this — whether it’s the Bible or the Koran — are the stories. I love great stories!” She attributes some of that passion to her father, Michael Frank, a Mark Twain scholar at UC Berkeley’s Bancroft Library.

“What attracts me about all this — whether it’s the Bible or the Koran — are the stories. I love great stories!” – Gabriela Lena Frank

Frank has composed other pieces “inspired by stories where gods are evoked and spiritual prophesies are evoked. I don’t prioritize one over the other as the truth,” says the composer, who has often fused Latin American folklore, mythology, and musical forms with classical music in fresh and engaging ways. This piece, however, whose music Frank describes as melodic, lyrical, and “maybe bitonal,” doesn’t drawn on Latin idioms.

Those Latin elements may come into play in Part 2 of Holy Sisters, which will focus on spiritual women of the New World. It will be set to text by Nilo Cruz, the Pulitzer Prize–winning Cuban American playwright who worked with Frank on La centinela y la paloma, the song cycle she wrote on commission for Dawn Upshaw and the St. Paul Chamber Orchestra (Carneiro conducted the premiere last year, and Rivera will sing it with the Annapolis Symphony next year). They’re currently expanding the piece, which deals with the returning spirit of artist Frida Kahlo, into an opera.

Cruz helped Frank adjust Tolentino’s text and structure Holy Sisters, which the composer describes as “a celebration of women’s faith.” She expects the second, longer half, which will feature Rivera and a mezzo-soprano, to be a bit darker. So she’s written some dissonant orchestral parts in the prelude, with its undulating harps, to foreshadow and link to elements that might appear later.

“We want our contemporary artists, who are the voices of our time, to create something new that’s an expression of who we are today.” – Joana Carneiro

“I’m guessing that this darker music is going to work,” Frank says. “I’m casting a stone out to give myself something to bounce off. If it doesn’t came back [in Part 2], does it still work? I think it does. … Joana and I both agreed that if this was going to be a two-part piece, each half had to work as a stand-alone and together.”

As she often does, she began by experimenting with sounds that might end up in the piece or land in the binders where she saves good ideas that haven’t yet found their place. She wondered what kind of “cool effects” she could come up with by using the girls’ voices instrumentally. She created a kind of humming sound that’s picked up by the violins.

“They’re just shimmering, almost like a halo. There’s something kind of religious about that sound. Great color,” says Frank, who knew she’d use the sound in the piece somewhere. She composed four or five different melodies or sounds, resetting the text different ways, for each of the women. “Because I’m prolific, I’m not afraid to throw away a lot of stuff.”

The Profundity of Simple Things

Composing Carneiro’s wedding song reminded Frank of her very first composition, a string quartet she wrote at 16. It’s still one of her favorites. “It was straight from the heart, with no notion of being clever,” Frank says.

Rivera was so enamored of the song when she first sang it at Frank’s house that she asked for a piano reduction of the score so she could sing it on concert tours.

“Joana wants all the things she’s involved with to be about truth and beauty,” Rivera says, “and when I heard the song I thought, This is what Joana is all about. It’s truth and beauty. I think it was an epiphany for Gaby [Frank] to realize that something she’d written that was so simple and straightforward could make such an impact.”

Rivera, who has originated roles in works by John Adams, Osvaldo Golijov, and other prime contemporary composers, loves bringing new works to life, “being there at the genesis of the creation,” as she puts it. “I feel extremely blessed that I’ve had so many opportunities to do that in my career.”

Carneiro feels the same way. “We want our contemporary artists, who are the voices of our time, to create something new that’s an expression of who we are today, spiritually and politically,” Carneiro says. “That’s incredibly exciting. And to do that with artists we admire so much and who are our closest friends is an added joy.”