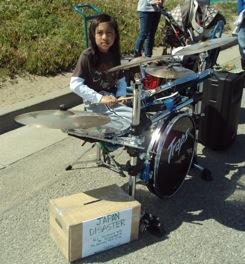 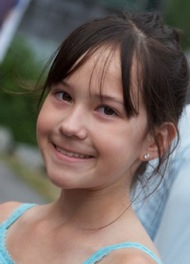 San Mateo student Jane Lange (12) is headed to the Big Apple this May, one of nine people collecting the 2011 Morton Gould Young Composer Award in the category of the youngest composers (ages 10-18). She and 13 year-old Sidarth Jayadev, graduate of the John Adams Young Composers Program at the Crowden School, will be crossing the stage of the Merkin Concert Hall to be honored by the ASCAP Foundation. This is her second time receiving the prestigious award — she won in 2008 as well. A grand total of some 750 scores were submitted by applicants, ages 10 to 29.

Lange’s parents noticed her talent when she began improvising on her toy piano at age four. Shortly afterward, she began singing in choir, started taking lessons in improvisation and composition from SFCM and Crowden teacher/composer Alexis Alrich, and hasn’t looked back. Currently, Lange spends her time writing songs. According to her mother, her process is natural: She writes down what she hears in her head, and rarely goes back to edit.


Her winning piece, Moments, is scored for flute, violin, viola, bass, and drum. She composed it whil in residency at the Walden School. (Listen to MP3 at right.) Congratulations to Jane Lange!

If you’ve enjoyed the springtime outdoors in San Francisco of late, you might have heard this 8-year-old youngster with an uncanny sense of rhythm, playing his junior drum kit to prerecorded heavy metal and rock covers.

This April, Joshua Hui has set up at Pier 39 and at Hwy. 1 during “Sunday Streets” to gain attention for the victims of the Japan Earthquake disaster, raising $1,400 to date. And he can’t help attracting attention to himself, looking and sounding every bit the part of a serious rock-n-roller with his long hair, gear, and high-energy double kick drum action.

Supporting Hui’s proclivity for banging on pots and pans as a baby, his parents put the sticks into his hands at age 2, and gave him his first lessons at the Almaden School of Music at age 4. He currently attends the Paul Green School of Rock in San Mateo, where his older band mates and teachers are impressed with his precocity, as is anyone who looks at his Web Site.

This kid is a serious player with a heart of gold. Recently he’s used his talent to raise money to help victims of flooding in the Philippines and the San Bruno fire. If you’d like to donate, or see him play, go to jamhui.com. 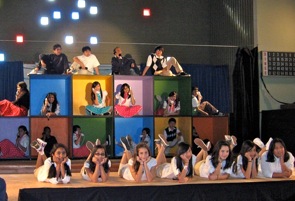 Middle school kids bitten by the musical theater bug usually seek out private programs, after school, for their stage time. Not so at Saint Patrick School in Rodeo, whose kids, under the direction of Margaret Secour with help from other dedicated faculty, produce a full-length musical each year, involving the entire 6th to 8th grade classes. This year’s show, Bye Bye Birdie, was a smashing success and life changing for its participants, especially for those who never imagined they could pull it off.

“I enjoyed being outside my comfort zone and letting out my voice. Now I know that there is someone inside of me that isn’t afraid to show herself to anyone.”
— Alyse Yee, 8th Grade, played Kim MacAfee

“Usually when I speak in front of a crowd, my legs start to quiver and I lose my train of thought. Though, when I am in a play for some reason, my shyness goes away and I am able to say my lines and not feel nervous. I feel like I have accomplished something that I wasn’t able to do before and that was not to be afraid speaking to a live audience.”
— Noah, 7th Grade, played Randolph

“For me, musical theater isn't only what's said and performed on stage, but also the feeling and efforts that have gone into a role. Taking a part in this production has helped me to come to know that I'm capable of more things than I think I am, even if I must dive deeper to discover them.”
— Niki Basas, 8th Grade, played Mrs. Doris MacAfee

“What was learned about myself was my own ability to sing and act. I had never realized how much I enjoyed acting and singing, and I was glad to see that the parents and students watching enjoyed it as well.”
— Anthony G., 7th Grade, played Albert Peterson

And all of the kids praised the efforts of their directors highly. In order to involve the whole school, music teacher Margaret Secour holds a special Audition Project class in the fall, where kids can get comfortable with the material and with their singing voices. She requires everyone to go that far, even if they do not eventually take part in the production. The school Principal Kelly Stevens acts as stage director, and runs rehearsals during lunch and after school, and art teacher Loretta Airoldi creates the sets. And in spite of all of the work involved, the school community is already looking forward to next year’s play.