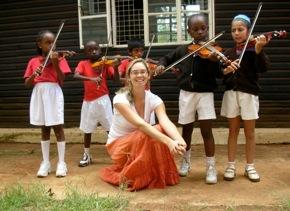 At the young age of 15, pianist Rachel Breen’s schedule reads like a pro’s, and then some. A few weeks ago she performed a Tchaikovsky concerto with the Palo Alto Philharmonic and performed Bach’s Goldberg Variations at another concert. This week she’s playing entirely different repertoire, competing in the International Russian Music Competition in Santa Rosa, in between six hours of final exams at Miramonte High School. “About four weeks ago, I had to make a chart of what to practice, when,” says Breen.

She earned an Honorable Mention last year in the competition’s younger division, in a field that was populated with talented pianists from all over the world. This year she moves up an age group and the stakes are higher. “It’s still a lot of fun,” says Breen. “I wanted to be challenged by learning all of the required repertoire, since it’s good practice for preparing a solo recital.” She found last year’s competition highly impressive. “The level of the contestants was so high, so many of them were outstanding. I really liked meeting people from different countries.”

What does this champion do to prepare herself for the pressure? Lots of slow practice and breakfast with her family the morning of, to keep her calm. Breen is interested in pursuing a solo career and would like to attend the Curtis Institute. Meanwhile, she’s happy to learn more of the Haydn and Rachmaninov she loves, to prepare for a future competition with teacher Sharon Mann, and “keep getting better.”

Hear the finalists of the International Russian Music Competition this weekend!

This July, seven students from San Francisco’s Saint Ignatius College Preparatory, together with music director Dr. Gillian Clements, embark on a very special cultural exchange. The group goes to Africa, ending up in Nyeri, Kenya at the school where Clements founded a string program five years ago. “The Mount Kenya Academy is run by Kenyans, for Kenyans, and promotes traditional Kenyan values as well as those of the West,” she says. Clements became interested in the school while conducting research on bimusicality for her dissertation at Boston University, a term, which she has now eschewed. “I’ve come to see music as a natural offspring of these kid’s bicultural lives, not just bimusical. The students have travelled and are equally comfortable in both worlds.”

Mount Kenya Academy teaches the rich African heritage of dance and music, (which is one word in their native language) yet stringed instruments were unknown, and there was no access to them. Clements worked with generous donors to ship their first collection of about 40 violin, viola, and cellos abroad; instruments that the 100 students have to share (forget about importing a string bass!). She says it’s challenging to find string teachers who can relocate to rural Kenya until a Kenyan instructor can be found. With the absence of such services, teachers also must add repair to their list of duties, often gluing, tying, and otherwise rigging instruments, as they never imagined they could. Clements is looking forward to hearing the progress of her first graduating class, and combining them with her students from Saint Ignatius in a joint final concert. She has organized the entire tour and hopes to one day bring Kenyan students to San Francisco. “This is our pilot program, and one that will provide valuable cultural exchange through the lens of music.”

The Walden School Takes the Prize

It is one success after another for the Walden School, gearing up for their composition-based, annual Young Musician’s Program in New Hampshire this June. SFCV reported on their May 2, 2011 New Music Educator Award granted by the American Music Center. That same week Walden was announced as a finalist was announced as finalist for the 2011 National Arts and Humanities Youth Program Award, out of 471 nominations from 48 states, the District of Columbia and Puerto Rico.

The school is in contention for a $10,000 one-time grant and an invitation to attend the White House awards ceremony hosted by First Lady Michelle Obama. Good fortune comes in threes, and the NEA has just recognized the importance of this creative educational program by awarding a $35,000 grant; the fourth NEA grant Walden has received in 10 years. The obviously thriving school kicks off June 25 with concerts, teacher workshops and camp sessions at the Dublin School, in Dublin, New Hampshire.