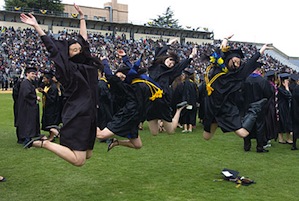 The special moments in life are showcased by the music that accompanies them: How better to embellish the emotions inherent in a memorable event than with a flourish of gorgeous tones and exhilarating melodies. Putting memories to music is naturally a part of graduation season. With all of the hustle and bustle of final exams, and the thrill of not knowing what happens next, commencement allows faculty, students, and their families to step back and take in the tremendous day.

This chance to celebrate through music is not missed at University of California, Berkeley where the department of music will highlight graduation with award winning musicians. Prior to the commencement ceremony Sunday May 13, three notbale musicians will share their talents with the graduating class. The first to take the stage will be pianist Lisa Mei-Hsuan Wu, recipient of the David and Diana Menn Memorial Prize in the Performing Arts. This prize is awarded for outstanding creative talent which Wu will demonstrate in a performance of Ravel’s Jeaux d’eau. The remaining two performers in the one hour concert are recipients of the Eisner Prize in the Creative Arts, awarded for outstanding achievement in instrumental or vocal performance. Andrew Gascon, bassoon, is majoring in Molecular and Cell Biology, as well as Music. Alana Mailes, voice, is also in pursuit of a double major, Music and Italian Studies. Their years of study will be evident when Gascon performs Sonata for Bassoon and Piano by Saint-Saëns, and Mailes brings numerous art songs to life.

The concert will celebrate the great achievements of the musicians at UC Berkeley, and all the graduates and great things to come.

The San Francisco Boys Chorus has proven time and time again why they are a Grammy Award-winning ensemble. This spring is one to get on your calendars now.

The first concert on the docket was of royal proportions with a performance at Grace Cathedral on May 6 as the launch of the From the Courts of Europe tour by The Copenhagen Royal Chapel Choir. Next, the SFBC will celebrate an event closer to home in a performance at the Crissy Field Center over Memorial Day weekend as part of the festivities for the 75th Anniversary of the Golden Gate Bridge.

The Boys continue the spring season with another collaboration — this time with locals. On June 16 they will hold an Interactive Arts Day at the Cathedral of Christ the Light in Oakland. The day will offer drumming and dance workshops inspired by the Congolese Mass Missa Luba, and conclude with a concert featuring the same chants and percussion, as well as dancers from Robert Moses’ Kin.

The season will include a a tour to Los Angeles, a recording of Gordon Getty’s Hodie at Skywalker Ranch and for three of the choristers a chance to play the Genii in San Francisco Opera’s The Magic Flute.

Youth Orchestras are a tremendous treat for all ages. The El Camino Youth Symphony is out to prove just how sweet with its upcoming Ice Cream Social Concert. The performance, taking place this Saturday at the Albert and Janet Schultz Cultural Arts Hall will feature the incredible talent of four student orchestras, as well as an all-you-can-eat ice cream sundae bar.

There will be a plethora of Youth Orchestras to choose from in the coming weeks. The Peninsula Youth Orchestra will offer a free family concert this Saturday in Redwood City. The Musical Menagerie will include “animal inspired music” to inspire the entire family. The concert will feature Saint-Saëns’ Carnival of the Animals with piano soloist Alexandra Liu.

The following weekend the Marin Symphony Youth Orchestra will offer their own zoo, that is, a 45-minute instrument “petting zoo” following a "Sit In" concert at the Pickleweed Community Center. This interactive performance allows young children to sit next to the performers while they play. Of course the event would not be complete without another offering of ice cream for the young audience members.

Finally, on the 20th the San Francisco Symphony Youth Orchestra will inspire audiences at Davies Symphony Hall. The tour of youth orchestras will conclude with the musical prowess and mastery of SFSYO showcased through Schubert’s Symphony No. 8, Unfinished and Mahler’s Symphony No. 1.