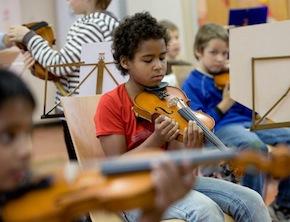 No Child Without an Instrument Left Behind

Music is one of the most powerful tools we have. It can unite and inspire. It can motivate and calm. It can educate and empower. But all this is lost if there are no instruments to bring out its power. That is the problem facing the children throughout Contra Costa County — a problem that the California Symphony Orchestra is determined to solve.

California Symphony Orchestra is the only professional orchestra in Contra Costa County, a county where only 50 percent of third graders can read English at grade level. With the overwhelming needs of its community in mind, CSO launched the pilot program Sound Minds. The goal of the program is to educate local children through music, with the end-goal of putting an instrument in the hands of every child in the county.

The first children enrolled in this free program were the first graders at Downer Elementary School in San Pablo. “We are honored to be at the cutting edge of music education in the Bay Area,” said Walter Collins, Executive Director of the California Symphony. “Given the fact that only 46 percent of our 3rd graders can read English at grade level, the need for leadership and new ideas has never been greater. Sound Minds is a game-changer. It won’t only teach kids music. It will change their lives forever.”

For the past several months the first graders have been hard at work creating, caring for and practicing on cardboard models of violins. On May 25 their efforts will be rewarded when they present their first “concert” using their homemade cardboard models. To commemorate their months of practice and dedication each child will be presented with his or her very own instrument. It is sure to be the first of many momentous days in Sound Minds.

Bringing the Magic Flute to Life

Summer is a magic time of year when going back to school is in the far-off future, and arts organizations gear up family programming to fill the endless days. One of the great stars in our musical world, the San Francisco Opera, has an especially unique treat for Bay Area families. This summer SFO will present Mozart’s The Magic Flute entirely in English and featuring some of Opera’s biggest names.

The Magic Flute has deservedly always been a family favorite. The charm of the characters and their incredible adventure puts a smile on every face, both young and old. That charm embedded in the beauty of Mozart’s music makes the opera both profound and lighthearted all at once. The upcoming performances are bursting with star power with singers such as Nathan Gunn filling the cast. The production will be brought to life through whimsical costumes and projections, marking the first all-digital production in San Francisco Opera history.

In addition to the creations on stage, SFO is bringing the whimsy to the audience through four interactive workshops. The workshops will give families a chance to experience the creative process first hand. The workshops will focus on all that makes The Magic Flute so powerful, including themes, story, characters, and of course, the music.

Opportunity of a Lifetime

For the past decade Beach Blanket Babylon has awarded its Scholarship For the Arts to three talented high school seniors. The scholarships are awarded for dance, acting, and voice in the form of $10,000 towards the winners’ college educations. On June 4 nine incredible finalists will perform at Club Fugazi vying for the scholarships. The evening will be led by Master of Ceremonies Don Bleu from 103.7FM. The finalists will perform for a celebrity panel from all spectrums of the performing world including Zheng Cao, Carey Perloff, Gordon Getty, and even M.C. Hammer to name just a few.

This will be a night to remember not only for the finalists, but for all who attend.