McCoy Tyner and the Bay Area

Pianist McCoy Tyner was born and raised in Philadelphia and spent his adult life in New York City, but the jazz legend had a singular relationship with the Bay Area. His longstanding ties to storied Bay Area venues often shaped the trajectory of his career, while his commitment to those clubs provided them with gravitas that couldn’t be ignored. His death, on March 6 at the age of 81, closes a glorious chapter in the Bay Area’s jazz annals, a story that needs to be recounted.

Possessing one of the most commanding and instantly recognizable sounds in jazz, Tyner was revered for his pivotal role in John Coltrane’s legendary 1960s quartet. But seeds for the pianist’s close Bay Area ties were planted before he started his epochal run with Coltrane in 1960, on his very first cross-country engagment.

Tyner first met Coltrane while the tenor saxophonist was on leave from the Miles Davis Quintet in 1957. Though they played together frequently and pledged to join forces as soon as Coltrane left Davis to form his own band, Trane found it difficult to extricate himself from the trumpeter’s group. In a long interview with Tyner in 2004 in the midst of an engagement at Yoshi’s, he talked about his impatience waiting for Coltrane to start his own band.

“Every time John came close to leaving, Miles would offer him a raise,” Tyner said with a chuckle. “Meanwhile, Benny Golson came through Philadelphia and liked my sound. He said ‘Look, I’m going to San Francisco, you want to come out there?’ I was in my late teens, I had never been that far away from home.” 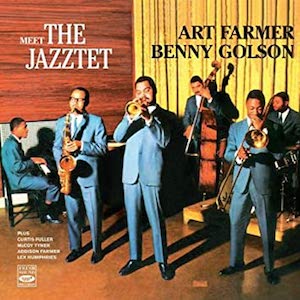 After the six-week run at San Francisco’s Jazz Workshop in 1959, Tyner ended up making his recording debut with Golson and Art Farmer’s Meet the Jazztet (Argo), a 1960 album now considered a hard-bop classic. Has any other pianist arrived with such an identifiable sound at 19? Listen to “Killer Joe,” a bona fide jukebox hit for the Jazztet, and there’s no doubt that it’s Tyner at the keyboard with his bright, declarative chords. Of course, Tyner was just getting started.  “I really enjoyed that gig,” Tyner said, “but I told them up front, when John leaves Miles, I’ve gotta go.”

Coltrane’s quartet with Tyner, Jimmy Garrison, and Elvin Jones performed several times in San Francisco, including a Dec. 7, 1963, set taped at KQED as part of Ralph Gleason’s Jazz Casual show, a thrilling 30-minute performance that can be found on several DVDs. After leaving Coltrane’s expanding group in 1965, he ended up recording a series of classic albums for Blue Note, but work could be hard to come by in the late 1960s. In some interviews he described driving a cab to make ends meet, while in others he said he merely contemplated getting a hack license.

His prolific post-Trane career blossomed when he started recording for Orrin Keepnews-founded Milestone in 1972. It was the same year that Berkeley-based Fantasy Records purchased the label and that Todd Barkan opened the North Beach jazz club Keystone Korner, providing Tyner with a foothold on both sides of the Bay. The first big-name acts that Barkan booked were Bobby Hutcherson and Tyner. 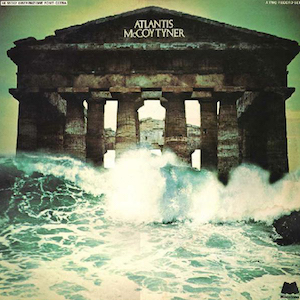 A regular presence at the club until it was shuttered by the IRS in 1983, the pianist helped give Keystone a fighting fiscal chance in February 1973 by performing gratis at a Paramount Theatre fundraiser with trumpet star Freddie Hubbard, multi-reed wizard Rahsaan Roland Kirk, bass maestro Ron Carter, and the protean Elvin Jones on drums so the venue could get its full liquor license. He returned to Keystone in the summer of 1974 and recorded one of his greatest live albums, Atlantis, with saxophonist Azar Lawrence, bassist Juni Booth, drummer Wilby Fletcher, and Brazilian percussionist Guilherme Franco.

After that he turned Berkeley’s Fantasy Studios into primary base of recording operations, starting with 1975’s trio session Trident with Ron Carter and Elvin Jones. It was a dauntingly creative run that included classic albums like Supertrios, the collective-spirited septet Together, and the orchestral Fly Like the Wind. The end of both Keystone and his contract with Milestone brought his relationship with the Bay Area down to a simmer, but it was only a matter of time before it started to boil over again.

For more than a decade Tyner played consecutive six-night runs with two different bands. The gig became a combination laboratory and showcase, a forum for trying out new lineups, reuniting with old colleagues and experimenting with musicians he’s never worked with before (sometimes all on the same gig). For instance, the second week of his 2004 run featured a quintet with Trane’s late 1960s partner in stratospheric saxophony Pharoah Sanders, monster bassist Charnett Moffett, rising drum star Eric Harland, and saxophonist Ravi Coltrane, who was playing his first engagement with his father’s former sideman.

By that time Olaine’s shoes had been filled by Peter Williams (now artistic director at Freight & Salvage), who relished the opportunity to help shape Tyner’s musical encounters. “A couple of years ago there were some questions about whether the residency had run its course and it’s obvious it hasn’t,” he said in 2004. “As long as he wants to keep doing it, there’s really no end to the people who would love to play with him and who could make something magical happen musically. It sort of sets a tone for the club at the beginning of the year.”

It didn’t hurt that Tyner religiously attracted packed houses. The buzz at the beginning of each run was palpable, as audiences sensed something extraordinary might happen. The pianist recorded another major statement at Yoshi’s with 2007’s McCoy Tyner Quartet (the first album on his eponymous label), a session focusing on beloved tunes such as “Walk Spirit, Talk Spirit,” “Passion Dance,” and “Blues on the Corner” featuring saxophonist Joe Lovano, drummer Jeff “Tain” Watts, and bassist Christian McBride.

A veteran of several of Tyner residencies, including a quartet that brought the pianist together for the first time with Joshua Redman and Brian Blade, McBride described the Yoshi’s gig as a perfect lens for examining the pianist’s legacy. Tyner’s eagerness to hook up with new bands and try out different configurations “is just a testament to his artistic greatness,” McBride said. “He never gets complaisant, he’s never on automatic.”

Posting on Facebook a few hours after Tyner’s death was announced, McBride described his January 2003 opening night at Yoshi’s as “one of the top-five most memorable gigs of my life.” He’d already recorded two albums and gigged extensively with Tyner, so he thought he knew what to expect. “But something had gotten into Mr. Tyner this particular week.”

When we started the gig that night, a spirit took hold of Mr. Tyner — and us — that I can’t say I’d felt before or since. Forget about feel, you could almost see fire, wind, and rain coming out of the piano that night. When we finished the first set, Lewis and I were drenched in sweat. Our suits were ruined. We just looked at each other and thought, ‘What just happened?’ McCoy just sat there peaceful as could be, sweetly giggling at me and Lewis’s amazement.” 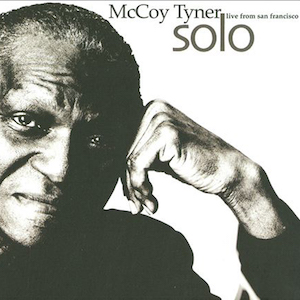 Tyner also performed numerous times under the auspices of SFJAZZ (and the organization’s earlier iterations as the San Francisco Jazz Festival and Jazz in the City), including a wondrous 2008 encounter with Savion Glover at Davies Symphony Hall. The last album released during Tyner’s life was 2009’s Solo: Live from San Francisco, which was recorded two years earlier at Herbst Theatre as part of SFJAZZ’s Spring Season. It was a bravura performance, it seems more than fitting that Tyner’s valedictory album unfolded in the Bay Area, where his music and spirit manifested so powerfully for so long. In the words of Christian McBride, Tyner was a “giant among giants,” and Bay Area jazz fans were blessed indeed that he spent so much time striding amongst us.

Legendary pianist McCoy Tyner expounds on his six decades of music-making, and swinging alongside other jazz greats.