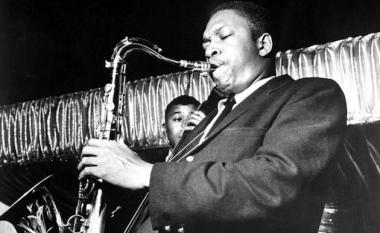 John Coltrane, Both Directions at Once (Impulse!)

There’s been no shortage of hype surrounding the new John Coltrane double album Both Directions at Once, with promotional material hailing the “lost album” as the “Holy Grail of jazz.” That’s laying it on a bit thick, as almost no one knew about these 55-year-old tracks and it’s not as if anyone was doggedly searching for a session to fill an obvious gap in Trane’s musical development. That said, you needn’t be a Coltrane completist to marvel at this long-buried recording from March 6, 1963, which is officially available on Friday, June 29. 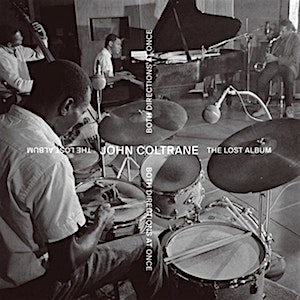 To say that the album captures the tenor and soprano saxophonist and his epochal quartet at a moment of transition is beyond obvious. From the moment he joined the Miles Davis Quintet in 1955, Coltrane was in constant creative motion, always seeking new approaches to improvisation. It was a search that ended only with his death in 1967 at the age of 40, and he’s as influential as ever today as a player, composer, and bandleader embodying a vision of jazz as a perpetual quest for truth and communal creation.

After two years of exploring with drummer Elvin Jones, pianist McCoy Tyner, and bassist Jimmy Garrison, Coltrane arrived at Rudy Van Gelder’s Hackensack studio that winter ready to work through an array of ideas and group concepts. The opening piece, infelicitously named “Untitled Original 11383,” starts as a 12-bar blues but quickly takes a left turn, with Coltrane’s unaccompanied soprano quickly joined by the quartet mid-theme. The piece takes another surprising twist when Tyner drops out, a reoccurring move that seems to define the terrain that Trane wanted to investigate.

It’s hardly the only thing on his mind though. A brief, solo-less version of “Nature Boy” feels like a trial for the classic album the quartet made with the great crooner Johnny Hartman at Van Gelder’s the following day (the Hebraic ballad didn’t end up on the Hartman album, but the saxophonist revisited it at length on 1965’s The John Coltrane Quartet Plays). He renders another lovely melody straight up with Franz Lehár’s “Vilia” from The Merry Widow, playing it first on tenor and then again on soprano (the latter is the only track previously released, first on an Impulse! compilation and later, on the Live at Birdland CD reissue).

The session centers on four versions of Coltrane’s “Impressions,” a piece based on the chord changes of “So What.” While numerous extended live versions of the piece have been released, he recorded it in the studio only once, about a year earlier, on the classic 1962 album Coltrane. Revisiting “Impressions,” he uses each take to explore a different feel, most conspicuously on piano-less “Take 3,” where he sails through harmonic vistas opened up without chordal accompaniment. Coltrane’s collaborators play magnificently throughout, but the thrilling “Take 3” left me wishing for another lost session on a day when Tyner didn’t make it to the studio.

Trane figures prominently in another remarkable project from the vaults, the four-disc The Final Tour: The Bootleg Series, Vol. 6. The back story is that Coltrane was itching to leave trumpeter Miles Davis’s quintet in the spring of 1960 to pursue his own career as a bandleader. Signed to Atlantic, he’d released the hardbop masterpiece Giant Steps the year before and had a bead on a young pianist from Philadelphia named McCoy Tyner who he thought he could build a band around. 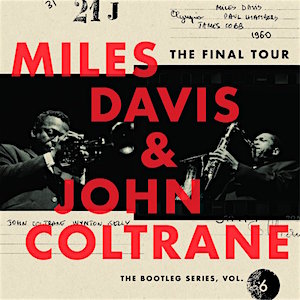 Booked on Norman Granz’s remunerative Jazz at the Philharmonic tour of Europe, Davis prevailed upon Coltrane to make the trip with pianist Wynton Kelly, bassist Paul Chambers, and drummer Jimmy Cobb, the superlative working rhythm section introduced on 1959’s Kind of Blue (Cobb is the only surviving member, still playing beautifully at 89).

Unlike Both Directions at Once, this music has been widely available on bootleg recordings released by European labels, so it’s not a revelation like the first release in this series, 2011’s three-disc set documenting Davis’s quintet with Herbie Hancock, Ron Carter, Wayne Shorter, and Tony Williams, Live in Europe 1967. But with Mark Wilder’s wondrous mastering, and first-class production by Steve Berkowitz, Michael Cuscuna, and San Francisco’s Richard Seidel, this authorized bootleg captures the centrifugal forces pulling at the seams of the ensemble.

The set includes two shows from Paris’s L’Olympia Theater from March 21, two shows from the following night at Stockholm’s Konserthuset, and one concert from Copenhagen’s Tivolis Koncertsal on March 24. The band’s repertoire featured the same standards Davis had been playing for years: “All of Me,” “Walkin’,” “On Green Dolphin Street,” and “Round Midnight,” with the addition of “All Blues” and “So What” from Kind of Blue.

The Parisian audience is audibly divided by the music, alternately hooting and applauding each tune. The contrast between Davis’s distilled lyricism and Coltrane’s extended solos is bracing, as the saxophonist pushes against the song forms. His extended solos don’t respond to the trumpeter so much as pose a different set of questions.

The fourth disc closes with a six-minute interview the Swedish deejay Carl-Erik Lindgren conducted with Coltrane, and hearing his voice is as fascinating as any of the music. He was years away from his most controversial music, but Coltrane was already subject to bizarre projection from jazz critics who heard fury in his music rather than the spiritual quest he was on.

“Do you feel angry?” Lindgren asks. “No, I don’t,” says Coltrane. “The reason I play so many sounds, maybe it sounds angry, I’m trying so many things at one time. I haven’t sorted them out.”

He was still sorting three years later when he recorded Both Directions, but he had found a whole new set of queries.

Looking Back for a Way Forward: Jeff Scott’s Passion for Bach and Coltrane

A musical tribute to the great jazz saxophonist by way of J.S. Bach and poet A.B. Spellman

With a crackerjack quartet and a sheaf of exciting new material, the local saxophonist shows why his influence is so pervasive.