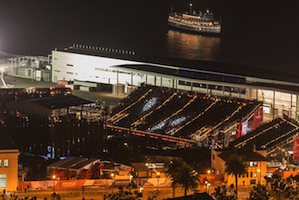 From a non-musical perspective, the much-hyped America’s Cup sailing race that Oracle software billionaire Larry Ellison brought to San Francisco this summer has been a fiasco so far. But the concert series in the Cup’s temporary 9,000-seat amphitheater at Piers 27-29 on the palm-lined Embarcadero, where the San Francisco Symphony plays July 20, is going swimmingly.

Tragedy befell the event in May when a British Olympian sailing for the Swedish Artemis team was killed during a training run on rough San Francisco Bay when his team’s 72-foot catamaran — designed for this race to literally fly over the water in a risky move called foiling — flipped in high winds.

Because of the huge expense of building such fast boats, and the possible hazards of sailing them, Artemis, whose $100 million effort here is being funded by Swedish oil baron Torbjorn Tornqvist, is one of only four teams participating in the America’s Cup — the smallest turnout in the modern era of the race begun in 1851. It’s also eleven or so countries fewer than the city was led to believe would be participating when it agreed to pour public money into upgrading old piers and doing other costly bayside work for the event. 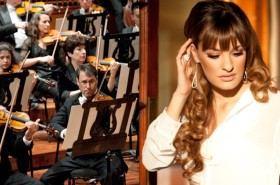 According to tradition, the race’s locale and boat design are chosen by the cup’s current caretaker. That would be Ellison, the elusive Peninsula tech magnate and Asian art collector who’s the third richest guy in America, after Bill Gates and Warren Buffett. His BMW Oracle Racing team won the 2010 America’s Cup in Valencia, Spain (a particularly acrimonious and litigious affair, even for this contentious sport).

Promising big things for telegenic San Francisco, he created the for-profit America’s Cup Event Authority to produce the event here and enlist local support. Fundraising fell flat, and, as the New York Times reported last month in a story headlined “When Billionaire Sets Rules, It’s an Exclusive Race,” the Cup authority pulled out of the original deal to invest $100 million to build boathouses and restore the piers. Instead, the city is spending about $25 million on the project.

“When you combine acts with a history in San Francisco with a waterfront venue like this — which isn’t going to be here next year — you sell a lot of tickets.” - Aaron Siuda, Live Nation Entertainment

To further aggravate matters, the two other teams hoping to take on the Oracle Team USA boat in the final round in September — Italy’s Luna Rossa, funded by Prada boss Latrizio Bertelli, and New Zealand’s team, backed by its government and Emirates Airlines — were protesting new safety-minded rule changes last week that they said give an advantage to the Oracle team. The Italians took the fizz right out of the big opening-day celebration, July 7, by refusing to race until the issue was resolved. New Zealand Emirates won an empty victory, sailing solo. It was a major embarrassment for the Cup and the city, and a real drag for thousands of people who came to see a race. 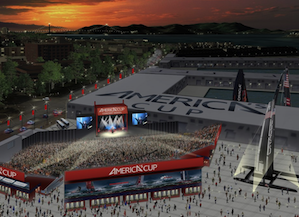 The size and feel of a small, new ballpark, the America’s Cup Pavilion is a “boutique” outdoor concert pavilion — almost intimate compared to al fresco venues like Shoreline Amphitheater in Mountain View, which can seat 22,000 — with shiny Astroturf and a huge, rock-arena-equipped stage, which Live Nation trucked from a lakeside Chicago venue called Charter One Pavilion. The brilliant young conductor Teddy Abrams, the San Francisco Symphony, and violinist Nicola Benedetti play the series’ sole classical concert — all Tchaikovsky, all the time — July 20, come moonlight, wind, or fog.

The pavilion faces the city, its back to the bay. The metal bleachers rising behind the faux-leather reserved seats offer a smashing view of downtown San Francisco, the Transamerica Pyramid, and phallic Coit Tower. You smell the sea air and hear the nautical music of creaking hulls, passing gulls, and the wind-whipped slap of riggings on masts.

“In any other venue, people would say this is the worst seat in the house, up in the nosebleed section,” said Aaron Siuda, Live Nation’s San Francisco vice-president, climbing steeply to the far right corner of the pavilion bleachers.

“Here, it’s one of the best. You’re looking right at the stage. You’ve got the Bay Bridge lights over there, Coit Tower over here. It’s a great view all around,” added Siuda, a graceful 6-foot-2 music business veteran with a shaved head and calm presence. His company, which dominates the concert production business, made a deal with the America’s Cup Event Authority to erect the pavilion and produce the 20-concert series that began in May and runs through October 12. 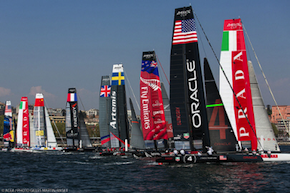 In addition to the Symphony, whose show is selling briskly, Live Nation has booked other big Bay Area acts in the bayside pavilion, where the public can watch the America’s Cup’s races live, for free, on big video screens. They include Berkeley rockers Counting Crows (July 18), San Francisco’s Train (August 11) and the wily, red-headed rock singer Sammy Hagar (September 7). Sting sold out the place last month, and tickets for next month’s shows by the grooving pop satirists Steely Dan and the young Jonas Brothers are going fast, too.

The prices are more or less what you’d pay to hear these artists elsewhere: $20-$89 for the Symphony (tickets are $12.50-$70 to hear Abrams and the orchestra play an all-American program at Davies Symphony Hall the night before, but they play much the same program at Dolores Park on Sunday for free), and $48-$227 for Steely Dan.

“We tried to put as many San Francisco and Bay Area artists into the venue as possible,” said Siuda, whose firm has invested hundreds of thousands of dollars into the venture and stands to profit if the sales continue apace. “When you combine acts with a history in San Francisco with a waterfront venue like this — which isn’t going to be here next year — you sell a lot of tickets.”

Rather than choosing a repertoire of sea-summoning classics like La Mer or Mendelssohn’s The Hebrides overture for this waterfront gig, Abrams, who grew up in the Bay Area and was playing clarinet in the San Francisco Youth Symphony at age 12, went for Tchaikovsky’s greatest hits: the waltz from The Sleeping Beauty, the Romeo and Juliet Fantasy-Overture, and the Violin Concerto, featuring Benedetti, the hot Scottish fiddler (see Jeff Kaliss’ SFCV profile of her this week) who, at 25, is a year younger than Abrams.

Prepare to Rock, and Dress Warmly

The San Francisco Chronicle’s pop music critic, Aidin Vaziri, raved about the sound and the views at the America’s Cup Pavilion, where emerging local bands will play for free on weekend afternoons following the races. But the $12 beer got Vaziri’s goat. He also reported that Sting said several times how cold it was out there, so dress accordingly and pity the poor tourists shivering in their shorts.

“We wanted to program concerts that will bring more people down to the waterfront, and maybe get more people to see the racing events,” said Siuda, who’s new to the big-time sailing game. He grew up in Connecticut and always thought of sailing as the leisurely pursuit of Newport yachtsmen who wore white captain’s hats and said ‘cheerio’. Then he saw the incredibly fast and agile catamarans sailing in the America’s Cup preliminary regatta last year in San Diego.

“It’s like the NASCAR of sailing. They have cameras mounted on the boats so you get views I’ve never seen before. It’s much more exciting that I expected.”

However this controversial America’s Cup unfurls, the music will play on in that breezy pavilion until crews fold it up and ship it off in October, leaving those huge reborn piers to the city that sometimes knows how.