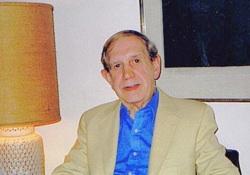 San Francisco Classical Voice lost one of its finest writers and an even dearer friend when Heuwell Tircuit died last Monday. His body was discovered in his apartment by his longtime friend Hal Cruthirds on Wednesday. He was 78 years old.

Tircuit was born in Depression-era Louisiana, in Plaquemine, a small town five blocks from the Mississippi River levee, on October 18, 1931. “I asked him once, ‘What is your name?’” his friend and physician Bob Owen recalled. “And he said, ‘Well, it’s Heuwell Andrew Beauregard Deschampsverre Tircuit. But you can call me Turk.’” Turk grew up taking care of several siblings and learning the cooking of which he was justly proud, and which his friends remember so fondly. He recalled some of the stories of his discovery of music in an article he wrote for SFCV, “Of Banana Splits and the Classics.”

In Tircuit, the manners and style of Louisiana invariably came to the fore. “He would always compare our behavior to Southern behavior,” said his friend of 40 years, Rick Otto. “‘That is very inappropriate,’ he would tell me. ‘We would not do that in the South.’” All his friends I spoke to remember gentleness and generosity as the chief traits of his character.

I met him when I was a freshman there, and I was trying to find a practice room. And I heard these strange sounds coming from a recording in one room. And I looked in there, and there was Heuwell sitting on the floor and the Bartók Fourth String Quartet was playing. And I said, ‘What in the world is that?’ And we were lifelong friends from that moment on.

After Tircuit had graduated and done a two-year stint in the U.S. Army, he and Cruthirds met up again in 1955 in Japan. “I went there in the Army — I was a general’s aide,” recalls Cruthird.

I immediately went over to the Asahi Broadcasting Company Orchestra — they [Japan] had 13 of them there, right after the war. And so the conductor, Prince Hinomaru Konoye, said, ‘Do you know anybody who plays timpani?’ and I said, ‘Yes, I do.’ So he says, ‘Can he bring kettledrums?’ and I say, ‘Yes, he can.’ So that’s how it was arranged. They purchased the drums, and he brought them on the boat. At that time, we had five foreigners in the orchestra.

While there, Tircuit donned a critic’s hat for the first time, writing for the Asahi Evening News and the Japan Times and becoming chief critic for Gramophone Japan. Adept at making friends and cultivating relationships, Tircuit became familiar with a wide circle of the arts community there, such as the film critic for the Japan Times, Donald Richie, and the composer Toru Takemitsu. Tircuit loved to tell the story of their first meeting: “I don’t know what you look like; how will I know you?” “Buy a watermelon and stand outside the market,” replied Takemitsu over the phone. And that’s how, a few hours later, Heuwell found himself, watermelon in hand, meeting another good friend (and a great composer, then at the beginning of his career).

Also in Japan at the time was Frank Korn, the president of Hugo New Corporation, which sold scrap metal to the Japanese. According to Cruthirds:

He and his wife, Marian, would give these musicales, just as they did in Europe, in their beautiful home in Tokyo. We had people like Bernstein and Serkin, and Heuwell was doing the planning of those things. And I and the orchestra played many of them. But the most amazing thing he ever did for them was to have Handel’s Water Music played on two barges down on the Sumida River [in imitation of the original performance] — one for the musicians and one for the guests.

Returning to America in 1963, Tircuit went to Northwestern University for a degree in music history, simultaneously writing criticism for the Chicago American. He also took advantage of a special grant from the Rockefeller Foundation to study music criticism with Virgil Thomson at the University of Southern California. Yet he still considered himself chiefly a composer, writing a great deal of music, including two cello concertos and other music for Cruthird, and a percussion concerto for the 22-year-old virtuoso Stomu Yamash’ta, who played 47 different instruments in the piece. The premiere at Chicago’s Ravinia Festival was written up in Time magazine. A portion of the Tircuit worklist is online at G. Schirmer, music publishers.

In 1971, Tircuit came to San Francisco and spent 21 years as a music critic at the San Francisco Chronicle, where he served with distinction. His reputation for probity and discernment was temporarily shattered when he was accused of dishonestly reviewing a dance performance that he purportedly had not attended. The chief critic for the Chronicle at that time was Robert Commanday, founder of SFCV, who writes:

His career at the Chronicle came to an unjust end that was, unfortunately, widely publicized. While covering a performance of the San Francisco Ballet at Stern Grove, the printed program he received lacked the insert that reported the replacement of a ballerina, and he described critically the performance of the dancer who had been replaced. It was assumed that he hadn’t been there or had left early when, in fact, two journalists from other newspapers reported seeing him there. That evidence was never explored, his explanation not accepted, and he was dismissed. The news of ‘the music critic who wasn’t there’ was published widely, in Europe and Canada.

SFCV’s Music News columnist, Janos Gereben, was there and reports: “I was sitting next to him at that disputed Stern Grove incident, and when the controversy raged (and before he was fired), I wrote a letter to the editor at the Chronicle about it. The point is he made a mistake because of the erroneous printed program (he also appeared not well), but he was wrongly accused of not being there, and suffered a virtually career-ending punishment for it.”

Anyone who knew Tircuit knew that it was not his habit to lie. He took criticism far too seriously for that. As his friend Bob Adams recalled:

I had always assumed that if there were two versions of the Rachmaninov Second Piano Concerto available, then I should buy the cheaper one. And Turk says, ‘You just don’t understand.’ So he took me over to his place and played me 17 different versions of one piano piece and described the differences in timing, phrasing, and general coloration in each one. And I could never hear all the differences he heard, but it did give me the idea that it was real — I used to think that what critics wrote was just their own personal prejudices, or that it was all a charade. But after that day, I realized that, for him, these differences were enormously important. He listened in a way that I was not — and still am not — capable of.

When Commanday founded San Francisco Classical Voice, Tircuit was one of the first writers hired, a decision that has been all to SFCV’s benefit. In Commanday’s opinion:

His reviews were informed by his deep musical knowledge and memory, enabling him to trace the influences on composers’ music keenly and to give trenchant, telling analyses of new music. Because he was a forthright writer whose lively personality came through in his prose, his reviews were received by the reading public warmly, both pro and con. As a colleague, he was a staunch and loyal associate, always ready to take on an assignment, to cover news stories as they arose, and to bring his wide knowledge of the current musical scene to bear in exploring them. Above all, his humor and imagination were always in play, qualities that were evident in his music, in his writings, and in his supportive relationship with colleagues.

He wrote for SFCV until the day he died, and his later articles, such as the wonderful appreciation of Samuel Barber that appeared in March, retained all the sharpness of his earlier work. He was a great storyteller and raconteur, belying the stuffiness that is usually associated with critics. If there were ever a person to emulate in the profession, it would be Heuwell, and we at SFCV can do no better than to continue his work in the same spirit of passion and delight.

Tircuit is survived by his sister, Virginia Tircuit Vernon, and will be buried in Louisiana next to his family, in a private ceremony.