It’s impossible to talk about the music of John Adams without mentioning the San Francisco Symphony. In an association spanning three decades, the histories of the world’s foremost living composer and the Bay Area’s preeminent musical organization have become inextricably linked. 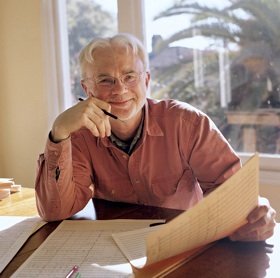 Portions of those histories will be traced over the next two weeks, in three S.F. Symphony programs devoted to Adams. The events start with the composer’s nativity oratorio, El Niño (Dec. 2-4), with Adams conducting. A second program (Dec. 8-11), conducted by Michael Tilson Thomas, features Adams’ Harmonielehre along with Henry Cowell’s Synchrony and Mozart’s Violin Concerto No. 5, with Gil Shaham as soloist. The final program, on Dec. 12, features S.F. Symphony musicians in chamber works by Adams: Road Movies, Shaker Loops (conducted by Adams), and Hallelujah Junction; his String Quartet, with the St. Lawrence String Quartet, completes the lineup.

Presented as part of the Symphony’s Project San Francisco, each program offers an intriguing look back at Adams‘ work with the orchestra. In a recent interview, the composer said he was excited about the possibilities.

“I’m looking forward to it,” said Adams, who had just returned to his Berkeley home after conducting his own orchestral work City Noir in Amsterdam. “This is a wonderful orchestra, and I haven’t had a chance to work with them for several years.”

Of particular interest are the performances of El Niño. Adams’ evening-length oratorio — he has called it “my Messiah” — sets texts by Rosario Castellanos and Hildegard of Bingen, among others. The work had its U.S. premiere on a S.F. Symphony program in 2001; since then, it’s been widely performed. “It seems to be somewhere in the world each year,” says Adams. “Last year, I conducted it at Carnegie Hall, and the year before that, it was done in Los Angeles. It’s become a kind of Christmas alternative.”

The 2001 performances were staged by Peter Sellars; this year’s semistaging is directed by Kevin Newbury. “It will be pared-down, very simple, and very elegant,” says Adams. The Symphony has assembled a first-rate roster of vocal soloists: sopranos Dawn Upshaw (Dec. 2 and 4) and Jessica Rivera (Dec. 3); mezzo Michelle DeYoung; countertenors Daniel Bubeck, Brian Cummings, and Steven Rickards; and bass-baritone Jonathan Lemalu. The S.F. Symphony Chorus will be joined by the San Francisco Girls Chorus.

The following week, Music Director Michael Tilson Thomas will conduct Harmonielehre. Adams’ large-scale orchestral work received its world premiere on a S.F. Symphony program in 1985 under then-Music Director Edo de Waart; the premiere, recorded and issued by Nonesuch, was a landmark in the composer’s career. These performances will re-record Harmonielehre for future release on the Symphony’s SFS Media label — which, as Adams says, “makes me the first person since Mahler to be on that label.”

Adams can scarcely wait to hear Tilson Thomas return to the work. “It’s a specialty for Michael,” says the composer. “The 1985 recording was done the same week as the premiere, so it still has all the wrong notes that we never caught in proofreading, and I ended up changing the ending a little bit. It’s still a very persuasive recording, for a first performance. But having Michael do it now is really going to be a thrill.”

Adams is also looking forward to the Dec. 12 chamber program, representing 30 years of his music, from the 1978 Shaker Loops to the 2008 String Quartet, performed by the St. Lawrence String Quartet, which premiered it at the Juilliard School and performed it last year at Stanford University.

Of course, it would take more than three programs to revisit Adams’ work with the S.F. Symphony. First appointed the orchestra’s contemporary music adviser in 1979, he also served as composer in residence from 1982 to 1985. Under de Waart, the Symphony performed its first Adams piece, Harmonium, in 1981; since then, it has performed 21 additional works, including six commissions, six world premieres, and four U.S. premieres. Highlights include the world premieres of El Dorado (1991) and My Father Knew Charles Ives (2003); the U.S. premiere of A Flowering Tree (2007); and the West Coast premieres of The Chairman Dances (1986) and Century Rolls (1998).

If Adams is closely associated with the Bay Area, his roots are in New England. He was born in 1947 in Worcester, Massachusetts, and wrote eloquently about his early years in his 2008 memoir, Hallelujah Junction. The book also covers his Harvard education, his break with academia, and his eventual move to the West Coast. Throughout, Adams writes with humor, honesty, and considerable insight into the life of a contemporary composer.

Today, he deflects praise for the book with characteristic modesty. “I think it was worthwhile,” says Adams. “A lot of people liked it, which pleased me. I tried to be candid in the book and not tweak my past or my personality. I wrote it for a larger audience, but my ultimate aim was for the book to be read by young people who want to start out in a creative career.”

Adams continues to write for publication; last month, the New York Times Book Review published his review of a new biography of the composer John Cage. The article engendered some controversy (find it on his Earbox blog).

Still, Adams’ dual career as composer-conductor allows little time for repose. He’s currently working on a sequel, or companion piece, to El Niño. It’s a commission and, though he can’t provide details, he will say that the still-untitled work features “the two Marys — Mary, the mother, and Mary Magdalene — and Jesus.” Scored for two low female voices, one tenor, and three countertenors, it is a dramatic work that focuses on “the few, but intensely important, moments when there are women in Gospel stories. So, in that feminine sense, it’s very much a continuation of El Niño.”

In the New Year, Adams will make his Metropolitan Opera debut, conducting Nixon in China. Although the San Francisco Opera has never produced Adams’ acclaimed opera (rumor has it that the company will do so in the next few years), the work remains one of his more frequently performed; the Met production, featuring Sellars’ original staging and James Maddalena reprising the title role, will be seen in a high-definition simulcast in theaters worldwide in February.

Adams, whose Doctor Atomic was viewed by millions in a Met simulcast, lauds the new innovations in opera transmission. “I’m really looking forward to Nixon getting out there,” he says. “Everyone who saw Doctor Atomic just flipped out. They thought it was great. At the same time that they’re telecasting it, they’re also making HD recordings. So we will finally have a document of Peter’s wonderful production, which is one of his masterpieces.”

Adam is about to return to the San Francisco Symphony with another new work. Commissioned by the Symphony and composed for orchestra and string quartet, Absolute Jest will make its world premiere in March 2012 as part of the Symphony’s 100th anniversary season. He’s just finished the score, which employs fragments of Beethoven scherzos, particularly from the late string quartets. “I heard a performance of [Stravinsky’s] Pulcinella and had an idea of taking someone else’s music and running it through the sieve and Mixmaster of my own personality,” he says. “It seemed like an interesting thing to do. Every composer has some relationship to Beethoven — either they hate him, or they resent him, or whatever — but my relationship to Beethoven has always been very much one of responding to his immense vitality and rhythmic drive. To be able to partake of that and put it into some sort of personal statement is a nice thing.”

Now that the piece is done, he’s happy with the results. “As you might imagine, it’s very high-energy,” he says, “because it’s probably going to be the world’s longest scherzo!”

He’s less thrilled about waiting for the premiere. “It’s frustrating, because I really want to hear it,” he remarks. “I’m used to hearing my pieces within a month or so of completing them, so this is going to be a very strange time gap.”