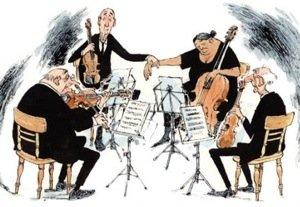 Music Close to the Heart: Why I Love Chamber Music

Heuwell Tircuit on October 6, 2009
All kinds of instrumental combinations occur in classical music, though chamber music is by far the most diverse, in terms of instrumentation and variety. If you’ve shunned this area, you’re missing out on much of the world’s greatest music, since many composers have poured their finest concepts into chamber music, especially the string quartet.

It’s the purity of chamber music that attracts composers.

The small size of the ensemble (often only three or four players), the intimacy of the music-making, means you can hear every element clearly, which is not always true of 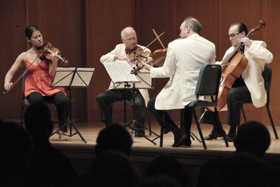 larger groups. There’s no room for superficiality, no hiding flaws with sheer volume, as often happens in orchestral music. The story goes that when Tchaikovsky told Brahms he was looking forward to hearing his Fourth Symphony, Brahms answered, “I don’t think you’ll like it. No cymbals.” (Those two never liked each other’s music, even if this story isn’t true.)

That’s the challenge, and the appeal, for composers: There’s no place to hide. Composers who can write great chamber music may achieve high prestige, as well as the personal satisfaction of communicating deep thoughts clearly and beautifully. True, chamber music written today may not offer the greatest financial rewards, but you can only utter your most personal thoughts in an intimate setting. It’s hard to say everything in your heart in, say, a televised speech to the masses.

Leonard Bernstein often complained to me that he desperately wanted to write a string quartet, “But I just can’t get one going. All my music is too operatic to fit chamber music.” Whereupon I reminded him that so was Mozart’s, yet his chamber music is among the greatest we know.

Johannes Brahms wrote only nine purely orchestral works. It seems that the structural engineer in him glorified in the rigors of chamber music composition, and he turned out 28 pieces for various combinations of players. Among them are many of his most moving and brilliant works, especially his two string sextets, four string quintets, and six quartets (three string quartets and three piano quartets, which feature a piano with string trio).

Ludwig van Beethoven’s chamber compositions outnumber his orchestral works by about three to one. The fact is rarely highlighted in biographies, but aside from his prowess as pianist, Beethoven could also play all the basic string instruments. His childhood home in Bonn, Germany, is now a little museum in his honor. On display there are his own violin, viola, and cello, used for playing at gatherings there and in Vienna.

His final years (1823-1826) were devoted to turning out the six most profound string quartets in the genre — what amounts to six monumental symphonies, each scored for only four musicians. They go by the name of their opus (publication) numbers, unfortunately, but the numbers are talismanic for musicians: Opp. 127, 130, 131, 132, 133, and 135. Some are so symphonic that they’ve been transcribed for full orchestral strings, and often turn up on symphony programs and major recordings.

Those late quartets amount to a musical imperative. As one of his pupils noted, Arnold Schoenberg considered any music unrelated to the C-sharp Minor Quartet, Op. 131, to be “merely exotic.” Stravinsky said that “Grosse Fuge” (Great fugue, Op. 133) was still the world’s most advanced modern music.

And mind you, to accomplish this, Beethoven abandoned the nearly complete first movements of his 10th Symphony in E-flat Major and Sixth Piano Concerto in D Major. He thought that finishing this late testament to his art was that important. I myself consider Beethoven’s middle and late-period quartets to be superior to his symphonies, concertos, or sonatas — as masterful as those all are.

The whopper collection of chamber music, of course, came from the pen of the outlandishly productive Franz Joseph Haydn. He wrote 78 string quartets (several early ones are considered spurious), 80 string trios, and 32 piano trios — and that’s just a partial list. Known as the “father of the symphony,” he would probably be better called “father of the string quartet,” a genre that had far less history before him.

Music for a Prince, a Pocketbook, and Posterity

Prince Esterhazy, Haydn’s early employer, played a bizarre string instrument, the baryton, which never caught on with the rest of the world. Haydn dutifully wrote 171 trios for it, all in a simple style so that the prince could play them. When Haydn’s contract with the prince allowed him to sell music to publishers, Haydn made up for lost time by turning out a virtual ton of chamber music, making a small fortune with some sharp business practices. Still, his quartets and piano trios are loaded with masterpieces, many less well-known than they should be.

Wolfgang Amadeus Mozart and Franz Schubert were also active in the chamber music field, featuring a lot of their most incredible music. Try Mozart’s magnificent, large Divertimento for string trio (K. 563, the “K” indicating Mozart’s catalog of works) or the enchanting Clarinet Quintet, for starters. Schubert’s String Quartet in A Minor (“Death and the Maiden”) and the “Trout” String Quintet in C Major are two of the most deservedly popular works in the classical repertoire.

At the other end of the spectrum lie the sole string-quartets of Claude Debussy and Maurice Ravel, both of which were wildly successful. Aside from appearing frequently on concert programs, they’re often heard, in bits, backing TV commercials, even for cars (go figure).

You get the idea. The world’s major composers (including some, like Jean Sibelius, who are associated with orchestral music) all contributed major chamber-music efforts, and, generally speaking, those are of high quality. The result is an abundance of riches that shouldn’t be ignored, though some of it is regularly ignored even by performing musicians. Saint-Saëns, for instance, wrote two elegant string quartets that are seldom if ever played.

For these reasons, chamber music invariably features the finest musicians, because they are so exposed by their prominence and number. String players often regard orchestral playing as something of a drudgery, but they love playing chamber music.

My fine cellist friend Hal Cruthirds — a student of Casals, no less, who played principal cello for a number of orchestras — told me that quartet playing was his greatest joy. “In an orchestra, you are just part of a herd having to conform 100 percent of the time. It’s a kind of tyranny. But when you are the only one on that line of music, you have a chance to express your own personality a bit. You can add little touches, enabling you to feel more like an artist at work. In all my years playing, I always belonged to a quartet. It’s my favorite medium.”

Another noted artist, the violinist Nick Eanet, recently left his, doubtlessly lucrative, position as concertmaster of the Metropolitan Opera Orchestra to join the Juilliard Quartet. A few years ago, the esteemed Geraldine Walther left her post as principal viola of the San Francisco Symphony and took her instrument to the Takács Quartet. That’s a positive illustration of Cruthirds’ point.

“Put Down That Salad!” — or, On the Road With the Great Bands 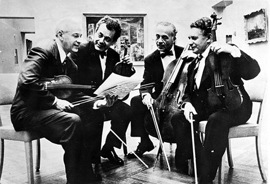 Like rock groups or popular bands, string quartet bands can be volatile. The classic example was the four Russians who called themselves the Budapest Quartet. Each felt that he alone knew the exact way the music should be played, so compromises were achieved only via heated arguments.

Their playing was immaculate, but their personal interactions were, to put it mildly, strained. It’s said that if they had to share one large backstage room, each went to a separate corner, and avoided even speaking to one another. The wonder is that their dedication to the ideal usually saved the day. I have been told that on trains or planes, they never sat in the same rows, though I don’t know if it really went that far.

Another quirky group was Vienna’s Kolisch Quartet. Founded in 1922, they emigrated to the U.S. in 1935. They ardently supported advanced modern music, especially that of Schoenberg, Berg, Webern, and Bartók. Rudolf Kolisch himself demanded that they play everything from memory. Imagine having all that difficult, new music memorized!

Although much chamber music requires virtuoso performers, remember that much of it was intended as home entertainment in the days before radio, record players, television, or the Internet. A lot of it can be played by reasonably astute amateurs. So there’s no reason to put your old, high-school instrument away for good.

The physicist Albert Einstein loved playing violin, though his violin did not necessarily return his affection. While at Princeton University he would finagle members of the 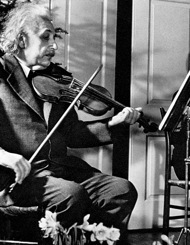 music faculty to come to his home to play Haydn and Mozart. Among them were the famed cellist Gregor Piatigorsky and pianist Artur Schnabel.

Einstein’s major musical stumbling block as a musician was his impatience. He didn’t like sitting out the places where he was supposed not to be playing, with the result that he’d often come back in too early. The story goes that on one particularly evening Schnabel, not quite realizing what he was saying, barked, “What’s the matter, Albert? Don’t you know how to count?!”

Yet it’s not only the strings that come out to play in a chamber setting. If you like to play an instrument, or you have a favorite one to your own ear, you can probably find something in the chamber repertoire that was written or arranged for it. Carl Maria von Weber, for example, wrote a sonata for the odd combination of flute, cello, and piano; Schumann wrote a set of variations for horn, two cellos, and two pianos; Debussy wrote a sonata for flute and harp. In the 20th century, virtually any and every combination has become possible, given a good composer or arranger, whether it be four or five guitars, or four saxophones.

If you’ve been avoiding chamber concerts as stuffy or overly refined, think again. When you get to hear music deeply dear to their composers played by top-class musicians, you’re in heavenly territory. That combination should be self-recommending.

The popular chamber repertoire is obvious enough, and with good reason; but there exists among the neglected some major jewels to delight the soul, as well as the ear. Here’s my top list of jewels worth seeking out, at least on CDs (or from online sources). Feel free to add your own in the Comments section below.
Heuwell Tircuit is a composer, performer, and writer who was chief writer for Gramophone Japan and for 21 years a music reviewer for the San Francisco Chronicle. He wrote previously for Chicago American and the Asahi Evening News.