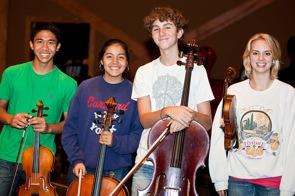 Musical Training, on the Job

Many teens aspire to become members of a professional symphony orchestra, but four such young musicians are living that dream now. They did not have to pass the usual audition process for the Berkeley Symphony Orchestra, yet theirs is still a trial by fire: Set down amid the pros for the season, they are expected to pull their weight. They’ll perform Stravinsky, Shostakovich, and James MacMillan on March 10 with Music Director and Conductor Joana Carneiro.

Side-by-side concerts are not new in the orchestra world. Student musicians play together with seasoned veterans in festivals like Marlboro, and orchestras regularly tailor a specific concert for young musicians, in the spirit of education. But this internship program, developed by the Young People’s Symphony Orchestra together with the Berkeley Symphony, inaugurates its participants in the work of the orchestra for the entire season — no handholding, no simplified repertoire. Says YPSO Executive Director Wendy Cilman Howe, “These players have to have not only outstanding musical abilities, but also a high level of poise and maturity in order to handle such responsibility and time commitment. Our conductor, David Ramadanoff, selects them under those criteria.”

What is your favorite thing about playing in the Berkeley Symphony Orchestra?

Inno: Getting exposed to, learning from, and making music with the incredibly talented and experienced professionals that perform in it. I have learned a lot from rehearsing and performing with them, also about how professional ensembles work.

Jessica: Having the opportunity to play and premiere pieces written in this century, and often being able to work with the actual composer.

Gabriel: Getting to play with actual professionals and seeing what they are able to do is pretty inspiring.

Lily: My favorite thing is being able to work with the professional musicians and to be a part of a professional symphony orchestra. I enjoy seeing how the concerts come together so quickly.

What is the most challenging?

Inno: Getting the music ready in a relatively short period of time. Although our parts are mailed to us a few weeks in advance, it is still very challenging to get the pieces ready during the week of the performance! I am used to having a couple of months of rehearsal with the ensemble.

Gabriel: The commissioned pieces are usually the hardest to play rhythmically, or because they ask you to use techniques that you don’t often see, like scraping your bow across the strings.

Lily: The most challenging thing is putting the music together quickly. It’s very intense, having five rehearsals in just four days. At YPSO, we rehearse for several months to prepare for one concert.

What is the most unexpected aspect of the job?

Jessica: Treats like candy, coffee, or nuts are provided during the concerts and rehearsals. I guess everyone needs something to keep them awake at 10 at night!

Gabriel: I was pretty excited when I found out we would be playing the Beethoven and the John Adams violin concertos in the same concert earlier this year.

Lily: Having this opportunity to play with the Berkeley Symphony was really unexpected!

Name a musician, composer, or teacher that you admire, and tell us why.

Inno: I admire both David Ramadanoff and Wendy Howe. David is the best conductor I have ever had and he is just as good an educator. In the three years that I have been in YPSO, I have learned so much about orchestral playing and composers. He has shown me what it takes to be a great, well-liked, and respected leader. I admire Wendy Howe because she runs YPSO so well, and is very kind and passionate. I was also lucky enough to attend a chamber music workshop with her where I learned more about leadership qualities.

Jessica: The Teresa Carreño Youth Orchestra of Venezuela is very inspiring to me because it was created through a music program called “La Sistema,” an organization dedicated to giving underprivileged children the opportunity to play music. Knowing how much music means to me in my life, it makes me really happy that kids who love music as much as I do get the chance to play, even if they can’t afford it.

Gabriel: Right now I’m getting a lot of really great help from my teacher, Jean-Michel Fonteneau. Every lesson, he’s got a bunch of new little things to show me, and he’s one of the nicest teachers ever.

Lily: I really admire my dad. He taught himself to play the piano and guitar, and he writes music. He worked really hard and is very good at everything he does musically.

Will you pursue music professionally?

Inno: I do not think I will pursue music as a professional performer, though I will definitely continue playing for the rest of my life. I hope to further develop as a musician in college and continue playing in ensembles, and hopefully musicals, too! I am thinking about pursuing a career in sound engineering and hope that the career I choose is somewhat involved with music.

Jessica: I will try to, but even if I don’t make it as a professional, I will definitely continue to play cello, no matter what.

Gabriel: I’m not completely sure if I will become a musician professionally. It’s supposed to be a really hard life as a musician, but all the musicians that I’ve talked to say they’re not doing it for the money and it’s something that you do because it’s your passion. I think it will be a tough decision when the time comes.

Inno: My iPod is very diverse! I have everything: pop, soft rock, classic rock, alternative, hip-hop, and techno. I have a fair amount of classical music, mostly things I have played — like Shostakovich, Glass, and Copland — and soundtracks to a few musicals. I listen to Maroon 5, Jack Johnson, and Jason Mraz. I even have some techno, like Daft Punk.

Jessica: I have practically every single genre on my iPod. What I listen to really depends on my mood, from Eminem to Billy Joel to Shostakovich!

Gabriel: I listen almost exclusively to classic rock and soul music right now. Led Zeppelin, Bob Dylan, The Who, Jimi Hendrix, The Doors, The Velvet Underground, and The Beatles are some of my favorite artists to listen to right now. I think Dylan’s A Hard Rain’s Gonna Fall is probably the greatest song ever written. I’m really inspired by the Emerson String Quartet and I listen to them a lot; I think chamber music is the hardest thing to pull off and they are just masters of the art.

Lily: I have Dvořák’s New World Symphony and Carnival Overture; Shostakovich’s Fifth Quartet; Schubert’s Death and the Maiden and several Beethoven symphonies; and a Saint-Saëns violin concerto, along with some Carrie Underwood songs. I also have a lot of musical theater music, like West Side Story and Shrek, the Musical.