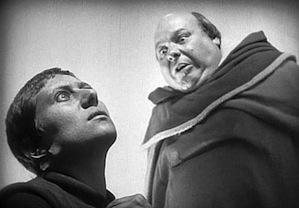 Musicians and the Sound of Silents (in Film)

The English pianist and composer Stephen Horne came out of the University of Nottingham with the vague ambition of playing and writing classical music. But shortly before he moved to London from his hometown of Essex, an old schoolteacher who ran a small film society asked him to accompany a silent movie, French director Carl Theodor Dreyer’s 1928 masterpiece The Passion of Joan of Arc. Horne figured he’d give it a go. He didn’t realize at the time that he’d found his métier.

“I had the arrogance of ignorance,” said Horne, one of the world’s premier silent-film accompanists, on the horn from Bologna, where he was playing for the 1928 British drama First Born and other silent movies at Il Cinema Ritrovato (Cinema Rediscovered) festival. “I had no idea that silent film musicians consider Joan of Arc one of the hardest films to accompany. I went in cold and improvised, which is largely what I do.”

That’s what Horne will be doing at the glorious Castro Theatre when he accompanies three movies at the 17th annual San Francisco Silent Film Festival. He’s one of several top silent-movie soloists and ensembles featured at the festival, which runs this week, July 12–15.

It brings together classics like William Wellman’s 1927 World War I epic Wings — the first winner of the Oscar for Best Picture, starring Clara Bow and featuring young Gary Cooper in a minor role — accompanied by the Colorado-based Mont Alto Motion Picture Orchestra, which will also play its score to the 1929 German film The Wonderful Lie of Nina Petrovna; the 1920 Douglas Fairbanks swashbuckler The Mark of Zorro, accompanied by Dennis James at the Castro’s mighty Wurlitzer; and Chinese director Sun Yu’s 1933 film Little Toys, brought to musical life by the noted silent-movie composer and keyboardist Donald Sosin.

Sosin will also play for a reel of Felix the Cat cartoons, improvising with Swedish drummer Mattias Olsson of the Matti Bye Ensemble, which will serve up its score to Swedish director Mauritz Stiller’s 1920 comic classic Erotikon (which inspired Jean Renoir’s Rules of the Game). The duo will be joined for one of the Felix flicks by Toychestra, the all-female Oakland ensemble that plays original music on toy instruments.

For the first decade of his career, in the pre-DVD days, Horne, who’s the resident pianist at London’s British Film Institute Southbank, rarely got a chance to screen the movies he was playing for in advance. He just sat at the piano and responded musically to whatever came onscreen. He’d get a basic idea of the story from the program notes, and “mentally get myself in a romantic comedy mood or a western mood,” said the pianist, 48, who came up with “little bits of motifs” to fall back on.

“I’m watching the movie and reading the subtitles much the same way the audience does. I try to interpret what effect the film is trying to have on the audience, moment to moment, and find a musical equivalent to that. There are certain basic things you can fall back on, like minor-based melodies for melancholy moments, and tempo changes. Sometimes there’s no choice. Suddenly you see people dancing to a jazz band, and you play a jazz dance!”

Horne, whose San Francisco repertoire includes Victor Fleming’s 1926 romantic comedy Mantrap, starring Bow as the flirtatious manicurist Alverna, has developed a method that lies between composition and improvisation. He plays off motifs that he’s written.

“If I have a default setting,” he said, “it’s somewhere between late Romantic and impressionist music. Using other things, like jazz, I’ve developed my own personal idiom out of that. I’m more concerned with creating a kind of overall musical sound world for each film, rather than playing music that audiences will think was composed in 1920. Equally, I don’t want them to think it was composed in 2012. I want to produce music that’s timeless, that’s just kind of floating on a bubble of its own making.”

“I want to produce music that’s timeless, that’s just kind of floating on a bubble of its own making.” – Stephen Horne

Horne’s most experimental score is the one he’s playing for South, a travelogue restored from film footage and glass slides from Sir Ernest Shackleton’s ill-fated 1914–16 Imperial Trans-Antarctic Expedition. He creates an otherworldly sound by blowing flute tones over the piano strings while holding down the sustain pedal, and summons the sound of wind by pressing the bellows of an accordion without playing a pitch.

When it all comes together, “when you and the movie and the audience are breathing as one, it’s like flying. The piano is playing itself.”

Unlike Horne, the Mont Alto Motion Picture Orchestra aims to re-create the music that silent-movie audiences would have heard — a patchwork of pieces, many composed for specific movies but widely used for other films to evoke moods and emotions, as well as bits of Beethoven, Grieg, and popular music of the period. Most movie theaters had their own library of “photoplay music,” as well as a musical director who compiled the score for each new film and performed it with a five- or six-piece orchestra (solo organists were also quite common).

“I’m a compiler,” said pianist Rodney Sauer, the Berkeley-bred musician who leads the Louisville, Colorado, chamber quintet, which has put together and performed scores to more than 100 silent films, many of which have been issued on DVD. “I’m trying to create scores that you could’ve heard back in the silent era, not the exact scores you would’ve heard.”

Drawing from a library of some 5,000 pieces — including the music of mostly forgotten, early movie composers, such as the American J. S. Zamecnik, who studied with Dvořák at the Prague Conservatory, and the Frenchman Gaston Borch, a student of Jules Massenet’s — Mont Alto stitches together 35 to 80 pieces into a seamless-sounding score.

“I’m a compiler. I’m trying to create scores that you could’ve heard back in the silent era …” – Rodney Sauer

“We pick music for each scene that we feel supports the film, that enhances the emotion,” said Sauer, 49, who majored in chemistry at Oberlin but spent a lot of time at the conservatory there. “We’re looking to make a consistent sound across the film, so we’re not picking things from widely different repertoires unless the film seems to call for it. Our score to [the Buster Keaton comedy] The Cameraman will sound quite different from the one for the drama The Wonderful Lie of Nina Petrovna.”

Nothing sounds quite like Toychestra, the Oakland band that cooks up an oddly alluring sound with plastic trumpets and Casio keyboards, slide whistles, ukuleles, drums, animal noisemakers, melodicas, a vintage toy violin, and other cheap, plastic instruments.

The other morning, the quintet was rehearsing its original score to Felix the Cat Weathers the Weather, a five-minute short from 1926, in uke player Angela Coon’s West Oakland garage. The cartoon played on a TV screen. The dreamy tinkling of chimes and xylophone gave way to clattering drums, thunder sticks, and a whooshing wind sound that gave voice to the onscreen storm. A toy accordion and plastic castanets colored the sound of the flamenco-flavored chase scene that followed.

“I don’t claim to be a professional castanet player. I’m a ‘toyist,’” said Corey Weinstein, who, like the other women in the band, which has toured Europe several times and recorded with avant-garde guitarist Fred Frith, has a day job.

The group grew out of another all-women’s ensemble called Better Hose and Garters, which played conventional instruments. Lexa Walsh, who’d been improvising with friends on toys and kitchen appliances for fun, brought the toys to the group that eventually became Toychestra.

“When the films are really good, they involve the audience in a way that sound films don’t. The music becomes an emotional undercurrent to the film.” – Donald Sosin

They collectively created the music for the Felix cartoons they’re accompanying at the Castro on Saturday morning (July 14), their first film gig. Initially, they tried responding to the narratives. Then they realized that for the music to work, it needed to be less literal and more about mood, Weinstein said, expressing what cartoons “felt like to us.”

Among other films, the veteran silent-movie film composer and accompanist Donald Sosin is playing his score to Josef von Sternberg’s noirish 1928 The Docks of New York, which Criterion put out on DVD. He’ll also jam with Toychestra during the Felix finale.

“I’ve heard a couple of their tracks online. It sounds like great fun,” said Sosin, on the phone from his Connecticut home. For Sosin, the resident pianist for the Film Society at Lincoln Center and the Museum of the Moving Image, playing for silent movies provides a singular pleasure.

“When the films are really good, they involve the audience in a way that sound films don’t. Part of the brain shuts off, and you’re not listening to people talking or hearing all the sound effects and ambient noise. The music becomes an emotional undercurrent to the film. I get involved, the audience gets involved, and it’s really a synergistic experience. When it’s really working, you can’t duplicate it.”