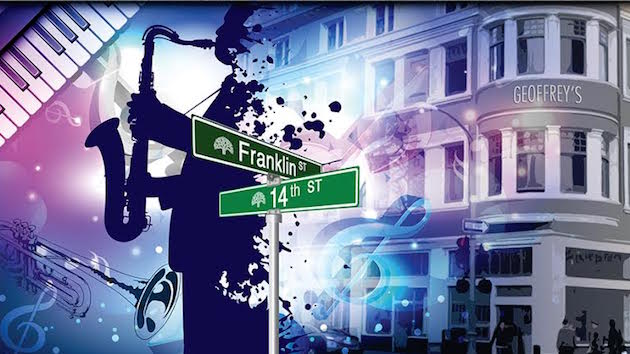 What’s unusual about Geoffrey’s Inner Circle as a jazz venue is just how down-home it feels, to audiences and performers alike.

“I think I have a different persona when I’m at Geoffrey’s,” testifies Thu Ho, who’ll be returning as featured vocalist with the Yancie Taylor Jazztet this Sunday. “I know my audience there; it’s a listening crowd who’s able to express their excitement. So I find myself doing a bluesier scale or arpeggio, more of an R&B-styled lick and improvisation.” Although Ho can deliver stylish ballads when called for, she points out that Geoffrey’s hosts “a much higher percentage of African-American listeners, so I know that big bluesy, ballsy songs are appreciated.”

On any given Sunday evening, each featuring a different singer, the audience at Geoffrey’s is arguably more integrated — with respect to race, age, and jazz preference — than at any other Bay Area venue. The  many repeat customers among then, are drawn by the downtown Oakland location, the community hall ambience (with ample seating, a large stage, and elevator access), the modest admission charge, the $10-dollar soul food buffet, and the old fashioned full bar. That’s aside from musical program, two sets by Taylor’s ensemble interspersed by an open jam session, often featuring East Bay teen jazz prodigies. And the occasional birthday party and tributes to community leaders, all presided over by the venue’s owner, Geoffrey Pete (who’ll be celebrating his own 67th birthday this Sunday).

Pete and his brothers Gregory and Dennis were raised with classical violin and piano training in Berkeley and Oakland. Their father was a union organizer, their mother, credited with integrating the Oakland YWCA, was related to the owners of Berkeley’s Reid’s Records, still in business. The brothers were also athletes, and Pete bears the stature of the basketball player he was in his youth, winning a four-year scholarship to San Diego State before going on to study at the Graduate Theological Union. While Dennis joined the Black Panthers and participated in their community programs, Geoffrey went to work for UC Berkeley architecture professor Ken Simmons at Dock of the Bay, a restaurant Simmons had designed and opened on the Berkeley Marina. Pete points to racial bias in the picketing of the black-owned venue by the union local, which, he asserts, let nearby white-owned nonunion restaurants alone.

After moving on to music promotions and partnering on a club in Jack London Square, Pete relocated in 1993 to his current location on 14th Street at Franklin, formerly a private, white, all-male club. He imbued in the new venue his user-friendly family values. “It's real natural for me,” he points out, “because I was raised by parents who were inordinately compassionate, and the worst thing you could do, growing up in our household, was to be selfish.”

But after a period of growth of black enterprise in downtown Oakland, the city’s police department “basically declared war on black clubs,” says Pete, while supporting white gentrification. False reports were filed about the behavior of Geoffrey’s patrons, but the venue persisted. Having hosted Sunday jazz jam sessions at the Dock of the Bay, with the likes of Ed Kelly and Robert Stewart, Pete initiated them at the Inner Circle in 2013, under the musical leadership of vibraphonist Yancie Taylor, backed by a rotating stable of quality side men, among them pianist Glen Pearson and bassists Larry Epstein and Aaron Germain.

Like Pete, Ho received classical training, excelling on violin while growing up with her Vietnamese immigrant parents in San Diego. She was drawn to voice and pop music in middle school, and at Harvard College she got a grant to help pay for private voice lessons with the Boston Conservatory’s Merrill Shea, who, after a year of operatic training, began to allow his student to work contemporary Broadway tunes into her repertoire.

But it was medicine which Ho chose as a career, and which brought her back to the West Coast, at the University of California, San Francisco. While pursuing a residency in pediatric endocrinology, she joined the Vocal Cords, a UCSF a cappella group. “It was a great way to relieve stress and meet everyone else in the community,” she points out. Taking off a year to attend to her ailing father in San Diego, Ho performed paying gigs with Curbside Vinyl, “a neo-soul, funk, and R&B band.”

“When I was in my 20s, jazz music didn’t speak to me,” Ho reflects. Then, on an excursion to Burning Man with the Vocal Cords group in 2015, Ho dropped into the festival’s Jazz Café and found herself falling in love. “I don’t think I can explain it,” she says, “but it was not hearing the same chords ringing all the time, it kept changing, with so much sophistication.” Ho started singing with the Cafe’s leader, San Jose-based guitarist Neil Kelly, who invited her to join him on his Bay Area gigs. She became more immersed in jazz repertoire and in the local community of musicians, among them bassist Germain, who in turn invited her to sit in on a Sunday jam at Geoffrey’s.

“Yancie heard me sing 'You’d Be So Nice to Come Home To' in a very saucy, sassy, and swinging way, versus a ballad,” Ho recalls. “And then I did 'Teach Me Tonight,' which is also sassy. And Yancie said, ‘I like you, I want you to be one of my main singers. And don’t be afraid if you want to throw an R&B tune at us; it’s an audience where it’s appreciated.’”

Ho came to see Denise Perrier’s gig as featured vocalist, “and after I sang in the jam, we spent time talking with each other. She had some wonderful comments, and I felt so inspired, I just wanted to keep coming back." Over the ensuing months, “I saw the same things happening: the older crowd, the people who were alive when the greats were still around in the ’50s and ’60s, are there and listening, because that had been the best time of their lives. But there are also folks in their 30s and 40s, and younger kids who are just enthralled by the music. It may not be the popular music of their time, but they’re old enough to appreciate it, and they’re playing it in school. And [while jamming at Geoffrey’s], some of them will incorporate pop tunes into their solos.”

Ho, now continuing as an endocrinologist and moonlighting as a singer at SFJAZZ and other venues, has no opportunity to rehearse with Taylor and his ensemble, “and yet when I bring my charts [the outlines of the songs and their harmonic changes], if I’ve done a chart that’s clear and concise and I give the right cues, everything happens without a hitch. They know exactly when the vocalist may need a little more support or to take a break.” Pete himself, says Ho, “is always so welcoming and warm.”

Photographs on the walls of the Inner Circle reflect some of the more celebrated customers attracted to Pete’s welcome, “from Ali to Belafonte to Redford to Dellums,” as he names them. Danny Glover, a confirmed jazz fan, stopped by a couple of months ago to help celebrate the life of nonagenarian Ruth Beckford, a longtime friend of Pete’s and a childhood mentor of the actor. “One of the benefits of hosting jazz,” Pete adds, “is that youngsters get a place to play. Jazz is a universal, and the greatest art form our country has.”