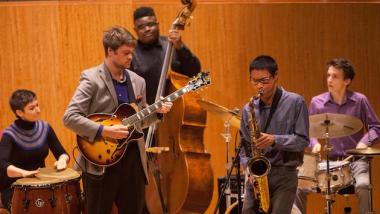 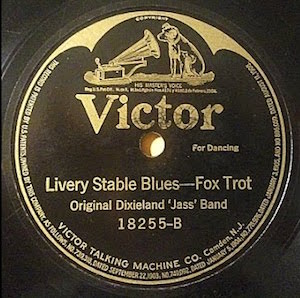 In the winter of 1917, a New Orleans quartet known as the Original Dixieland “Jass” Band made two recordings in New York City: “Livery Stable Blues” and “Dixie Jass Band One Step.” Released by the Victor label in May, the tunes introduced the nation to an emerging style known as jazz, launching a craze that came to define America over the next decade. That same year, on the other side of the country, the San Francisco Conservatory of Music opened for business (as the Ada Clement Piano School) with some three dozen students.

Despite various chaste flirtations over the decades, it’s taken a century for jazz and the conservatory to consummate a relationship. Leaping over the protean promise of infancy and the awkward growth of adolescence, the progeny of this overdue union seems to have arrived fully formed, with a visionary curriculum, vaunted faculty, and inaugural class of 13 exceptional students.

Denver-raised drummer Julian Archer is exactly the kind of ambitious and gifted young player that music schools look to recruit. In fact, the RJAM freshman was accepted at all nine programs he applied to, including the Manhattan School of Music and the New School, proving grounds for dozens of illustrious jazz musicians. In high school, Archer was already working regularly, hiring veteran cats like trumpeter Greg Gisbert and pianist Eric Gunnison for his gigs. So why did he come to RJAM?

“I’ve been a big fan of the SFJAZZ Collective drummer Obed Calvaire, and the fact that Matt Wilson’s here too was huge,” he said, referring to RJAM’s other drum professor, one of jazz’s most esteemed bandleaders and a brilliant poet of the trap set.

Archer admits that the city itself played a role in his decision, as did finances, as the Conservatory offered him a better aid package than other programs. He hasn’t had any reason to regret his choice yet. “The greatest thing so far is the intimacy and being able to play with the faculty on a regular basis,” he said. “We get to meet with them and play with them, and they workshop tunes with us. That’s the coolest thing.”

Like many of his classmates, Archer was recruited by RJAM Executive Director Simon Rowe, a respected pianist, educator, and entrepreneur coaxed to the Conservatory from the midst of a successful five-year stint running the Brubeck Institute at the University of the Pacific. The Australian-born musician swept into the program and designed several innovative classes (often focusing on music industry legal issues), expanded the Institute’s international reach, and created a jazz venue where students could play and experience established masters up close.

He arrived on campus while the Institute’s namesake artists were still a powerful presence. “Dave was very fragile, but Iola was still very active and I got to know them both,” Rowe said, referring to Dave Brubeck’s wife of 70 years, who played a central role in the development of his career. “I got to witness firsthand the power of an iconic figure. That made a huge impression on me.”

Part of what sets RJAM apart from many jazz programs is a holistic view of the tradition that embraces the music’s West African roots. The first outside lecturer brought into the school was 91-year-old pianist Randy Weston, an NEA Jazz Master and composer of at least half a dozen jazz standards. The intellectual godfather of Afro-centric jazz, Weston made a series of seminal recordings with arranger Melba Liston in early ’60s exploring African musical forms and incorporating African and Afro-Cuban percussion.

Pianist Rebeca Mauleón, SFJAZZ’s director of education and an internationally esteemed expert on Cuban music, is teaching the RJAM students a required two-semester course, “African Roots of Jazz” unlike anything on tap at other jazz programs. Drawing on the Bay Area’s deep pool of talent, she brought in celebrated Ghanaian choreographer C.K. Ladzekpo, who’s been on faculty at UC Berkeley for more than four decades, as the class’s first master teacher.

“The looks on the kids’ faces as they figured out these polyrhythms was amazing,” Mauleón said. “C.K. talked about watching his country gain independence. He isn’t just a non-African person talking about Africa. C.K. is devoted to sharing the tradition with others, and it gets the students thinking about West African traditions on a much deeper level. I also incorporated his writings into our course reader. We’ll look at the African diaspora in Cuba and Brazil and beyond in the second unit.”

Mauleón personifies the mutually beneficial relationship between SFJAZZ and RJAM. The conservatory can provide rehearsal space for SFJAZZ ensembles, and SFJAZZ is providing free and reduced-price tickets for concerts, “a fantastic symbiotic connection,” said Rowe, who sees the SFJAZZ Collective as a model for emulation, with its multicultural cast and emphasis on both classic repertory and new composition.

In many ways, RJAM arrives at a moment when California is coming on strong in jazz education with an array of singular programs, from Jazz Studies at UCLA, a concentration within the undergraduate major in the Department of Ethnomusicology, to Berkeley’s California Jazz Conservatory, the first accredited stand-along program offering undergraduate degrees in jazz studies.

“What we’re seeing is the West Coast is becoming a focal point for jazz studies, with strong programs at USC and UC Irvine that are viable alternatives to people traveling back East,” said saxophonist Jason Hainsworth, RJAM’s assistant director. “As the new kid of the block, we’re trying to attract students. The Bay Area has something to offer and the focus of this program is unique.”

One major obstacle to this vision is the crisis in student debt, a challenge that Rowe said he was addressing with Conservatory President David H. Stull by creating a healthy scholarship program. The health of the local jazz scene is also very much on Rowe’s mind. If the Bay Area has numerous opportunities for students now, Rowe and Hainsworth believe that RJAM can play a significant role in expanding opportunities for Bay Area players. While SFJAZZ provides a rich icing, “we haven’t got the cake,” Rowe said, lamenting the dearth of smaller venues where rising young players and veteran improvisers can share the same spaces, continuing the music’s oral transmission.

But it’s not just gigs that Rowe has in mind. He sees a thriving scene as fully integrated into the Bay Area cultural landscape, so that young musicians “have the opportunity to ply their craft in a community. I feel very strongly about the idea that jazz musicians need to get out and play blue collar working gigs, parties, weddings, Bar Mitzvahs. They need to learn the function of their music in the community. Our kids are already out gigging. In four years, we’ll be unleashing 60 to 75 young professionals onto the Bay Area scene, and their presence will be felt.”

Here’s what we heard at the inaugural concert of the Conservatory’s new Roots, Jazz, and American Music program.