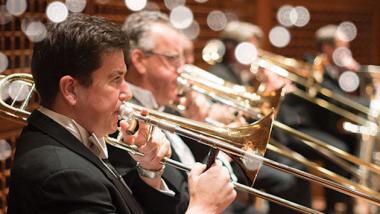 The SFCV Holiday Music and Event Guide, 2016 (A Little Fa la la la la for Everyone)

Not everyone can get there, but for those who can, the San Francisco Symphony puts on the dog during the holidays. There’s caroling, movies, Peter and the Wolf and a roster of star guest artists. Here are a few highlights. For the full calendar, go here.

The Christmas Concert (Dec. 7–8): The Nutcracker Suite, scenes from the opera Hansel und Gretel, and the Pacific Boychoir in Benjamin Britten’s A Ceremony of Carols and other holiday carols.

Singin’ In the Rain (Dec. 9–10): Through experience with my own children, and also a class from S.F. School of the Arts, I became an early booster of the Symphony’s accompanying classic films, playing the scores live. This December, the orchestra plays behind MGM’s most famous movie musical. There are two performances and tickets in the second tier go as low as $20.

Peter and the Wolf (Dec. 11): The San Francisco Symphony Youth Orchestra takes on Prokofiev’s jovial classic, with Linda Ronstadt narrating. The 11 a.m. performance also has a few Tchaikovsky favorites to round out the program. You can sit downstairs for $20 for this one.

The Messiah (Dec. 15–17): The San Francisco Symphony Chorus weighs in with Handel’s oratorio, a holiday tradition.

Celebrating the Holydays with Sweet Honey in the Rock (Dec. 23): The great vocal group brings their velvet sound to a program of traditional holiday music.

San Francisco Bach Choir: Christmas by Candlelight (Dec. 2, 4):  The chorus processes through a dark church carrying candles to start off this concert, featuring the early music band The Whole Noyse. If you’ve never seen it, you should.

Ragazzi Boys Chorus: In the Company of Angels (Dec. 3, 4, 11): There are several top-drawer children’s choirs in the Bay Area, and if you think they mainly sell tickets to family members, guess again. Peninsula-based Ragazzi is doing three performances (Palo Alto, Burlingame, San Francisco), and they will be singing challenging works by Benjamin Britten and James MacMillan, as well as Stephen Paulus’ Hymn to the Eternal Flame. And then, a carol fest, with audience participation.

Marin Symphony: Holiday Concerts (Dec. 3, 4, 13): As always, the Marin Symphony pulls out the candles for its holiday choral concert at the Church of Saint Raphael, featuring Marin Symphony Chamber Chorus, the Marin Girls Chorus, and harpist Anna Maria Mendieta performing a wide variety of carols from around the world. And then, on Dec. 13, the orchestra takes the stage for a holiday pops concert at San Rafael’s Veterans’ Memorial Auditorium.

Chanticleer: A Chanticleer Christmas (Dec. 10–23): This men’s chorus is one of the best and their Christmas program is a tried and true favorite, featuring music from throughout their very expansive repertory. If you haven’t caught up with this group, they’re helpfully scheduling 12 performances around the Bay Area this year.

S.F Girls Chorus: A Highland Holiday (Dec. 19): The San Francisco Girls Chorus transports you to Scotland for their Christmas concert, “A Highlands Holiday,” which features bagpiper Matthew Welch, cellist Joshua Roman, and a slew of carols, plus music by John Taverner, James MacMillan, Benjamin Britten, and others. At Davies Symphony Hall.

San Francisco Ballet, (Dec. 10–29): Yeah, it’s expensive, but oh, so special. If you arrive early, to special Family Performances, you can take a picture with one of the characters. Knockout sets, costumes, a wonderful cast: They do 30-plus performances of The Nutcracker every year, for a reason.

Symphony Silicon Valley (Dec. 16–24): It’s been three years since San Jose had a Nutcracker with full orchestra accompaniment. SSV takes on the task, bringing in Stars of Moscow Ballet Company to dance it, while the orchestra, directed by George Dougherty, plays the Tchaikovsky score.

Oakland Ballet (Dec. 17–18): A fine performance at very affordable prices, plus the Oakland Symphony playing the score live at the Paramount Theater. You can get a VIP package that includes a ticket to the Land of Sweets Tea Party.

Dance-Along Nutcracker, (Dec. 10–11): The San Francisco Lesbian/Gay Freedom Band started this as a fundraiser, but now they do it at Yerba Buena Center for the Arts, and every time they do it with a different “zany” story scripted by one of their members. It’s now a three decades-old tradition.

Philharmonia Baroque Orchestra: Handel’s Joshua (Dec. 1–4) Here’s a rarely performed Handel oratorio to go with all the Messiahs. Handel specialist Nicholas McGegan has done almost all the oratorios with PBO, and the lesser-known ones are a special treat, and make you realize that there aren’t any “minor” Handel oratorios. McGegan has a roster of excellent soloists for this one, and music fans have been anticipating great things since the show was announced.

American Bach Soloists: Messiah at Grace Cathedral (Dec. 14–16):  Messiah is an ABS specialty, and their interpretation is lighter and more dancelike than others, but the musicians shine and their attention to detail means that the music is fresh and alive every year. And the location can’t be beat. It was a Best of the Bay 2015 pick of SFCV readers.

Voices of Music: Virtuoso Italian Concertos (Dec. 16–18): Somebody’s got to do Arcangelo Corelli’s Christmas Concerto in the holiday season, so why not Voices of Music? Founders David Tayler (lute) and Hanneke van Proosdij (keyboards, recorders) have collected the usual suspects from the early music community for this small group and their rapport results in performances that are just otherworldly.

Community Music Center: December Fiesta (Dec. 9–10): At the newly refurbished Community Music Center, a concert of traditional year-end songs and Christmas carols from Mexico, Spain, and Latin America will be followed by a little fiesta, complete with hot chocolate, tamales, a piñata, and live salsa music for dancing.

SFCMP: Phil Kline’s Unsilent Night (Dec. 10): This free holiday event is linked to other Unsilent Night celebrations around the world. The original composition by Phil Kline, written specifically to be heard outdoors in the month of December, takes the form of a street promenade in which the audience becomes the performer. In San Francisco, participants in this interactive “boombox parade” will gather in Dolores Park at 5 p.m. and then stroll a well-chosen route through the city. Read our story about the project to learn more.

Oakland Symphony: Let Us Break Bread Together (Dec. 11): Michael Morgan leads this full-blooded celebration fueled, in no small part, by the irresistible ardor of Terrance Kelly’s Oakland Interfaith Gospel Choir. The music is gorgeous, but the wide-ranging inclusiveness is what makes it irreplaceable. SFCV’s only complaint, issued annually: There’s only one performance!

California Revels: A Revels Christmas in Wales (Dec. 9–11, 16–18): The Revels blends traditional music, dance, ritual, and folk plays into a program presented by a large volunteer chorus of children and adults drawn from the community along with a number of highly talented professional actors, musicians, artists, directors, and “bearers of tradition” from many cultures. This year they Revels travels to Wales in the 1920's childhood village of the great Welsh poet Dylan Thomas. Mummers, carolers, and dragons will abound.