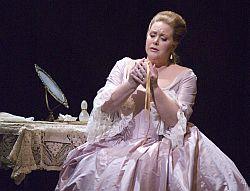 Georgia Rowe on May 13, 2008
It’s fitting that Ruth Ann Swenson should celebrate the 25th anniversary of her operatic debut with a return to San Francisco Opera. The soprano’s illustrious career, which has taken her to opera houses around the world, got its start here with the company she calls “home.” This month, the company plans to honor Swenson in style. In a special ceremony on July 6, S.F. Opera General Director David Gockley will present her with the San Francisco Opera Medal, the highest award the company bestows (previous recipients include Joan Sutherland, Marilyn Horne, and Sir Charles Mackerras). Before that, though, Swenson returns to the stage of the War Memorial Opera House as Ginevra in Handel’s Ariodante. With mezzo-soprano Susan Graham in the title role, and Patrick Summers conducting, performances are June 15-July 6. By traditional rules, 25 is a silver anniversary year. But Swenson, with her long blonde tresses and sunny smile, will always be the golden girl of Bay Area opera. Her voice is a rare instrument — large and unfailingly beautiful, with thrilling top notes and amazing strength through the middle and bottom ranges. She has technique to spare: power, agility, effortless projection, and a keen command of color and shading. She has a trill most singers would die for. Swenson is also an uncommonly honest artist; there’s a quality of emotional openness that suffuses every role she sings, from the sweet-tempered Gilda to the unhinged Lucia. That honesty was evident earlier this month, as Swenson, who lives in the Napa Valley, took time out to talk with SFCV about her career. The last few years have been challenging ones for the singer, with illness, surgery, and a very public dustup at the Metropolitan Opera to contend with. She talked about it all with humor and absolute candor. Swenson seems a little dazzled by the honors coming her way: “Twenty-five years?” she says, “Where has the time gone?” But she’s clearly excited about the first S.F. Opera performances of Ariodante, in a production that originated at Dallas Opera and reunites her with one of her favorite directors, John Copley.

The Willing and Able Handelian

“I’m always happy to work with John, because I adore him and the way he deals with these operas,” she explained. “In fact, every Handel opera I’ve done has been with him, and they’ve all been fabulous.” They have indeed. Swenson, who excels in Handel roles, has sung several in San Francisco, earning rave reviews for her assumptions of Dorinda in Orlando (opposite Marilyn Horne), Cleopatra in Giulio Cesare, and the title role in Semele. She’s finding Ginevra a great fit as well. “It’s a delightful role,” she says, “and she has a mad scene. She’s falsely accused of being a wanton woman, and she thinks her betrothed has committed suicide or is killed at sea. So she goes a little off.” Swenson, who has reprised Semele elsewhere to great acclaim, relishes the differences in Ariodante. “It’s a more involved story, there are more characters in it and more intrigue. Semele was an oratorio that was sort of adapted to the opera stage. This is an opera, straight out. And it takes place in Scotland, which makes it semi-Lucia-esque — without the knives and the bloody nightgown. She doesn’t go quite that off.” Swenson seems born to sing Handel, but she doesn’t think of herself as a specialist. “I just think I am one of the few people who actually do it and enjoy it and have done quite a bit of it in the operatic world,” she says. “My voice is quite large for this repertoire, which is important. This is a big theater and it needs that kind of sound. “With Handel, the vocal challenges are everything. You have to sing high, you have to sing low, you have to sing fast. You have to have chest voice, you have to trill. It’s tough, but I’m always thrilled to do it, because it brings me back to good technique.”

Technique has always been key to Swenson’s approach. Born in Bronxville, New York, and raised on Long Island — you can still hear traces of “New Yawk” in her speaking voice — she trained at the Academy of Vocal Arts in Philadelphia and came to Merola in 1981, after auditioning in New York for James Schwabacher. Schwabacher, one of the forces behind the Merola program, offered invaluable encouragement. “He certainly recognized my talent, and made it possible for me to come here,” recalls Swenson, who says she arrived as “a baby” singer. She progressed quickly. The company was in transition, she notes, with General Director Kurt Herbert Adler retiring and his successor, Terence McEwen, coming in. McEwen was also a huge supporter. “He was one of my big champions,” she affirms. “He really had faith in me.” As a “Merolina” in 1981-82 and an Adler fellow in 1983-84, Swenson learned the technique that would serve her throughout her career. She started with S.F. Opera’s touring company, Western Opera Theater, singing small roles such as Echo in Ariadne auf Naxos, Giannetta in L’Elisir d’amore, and the Confidante in Elektra. She has fond memories of Western Opera — it was on a tour that she met her husband, baritone David Burnakus. They both studied with voice teacher Dixon Titus. Swenson made her professional debut in 1983, while still an Adler fellow, as Despina in an S.F. Opera production of Così fan tutte. Roles including Dorinda, Juliette, Gilda, Pamina, and Adina followed. Gilda was a turning point. “It was a starring role, it was a fantastic Jean-Pierre Ponnelle production, and Nello Santi was conducting,” she remembers. “I was thrilled to sing it because I’d done it on the Western Opera tour, and I was really ready for it. It was a great experience.” Her Met debut (as Zerlina) came in 1991, with debuts in Washington, Chicago, Dallas, London, and Salzburg soon after. But Swenson returned to San Francisco often, singing roles including Lucia, Violetta, Manon, Semele, and the Countess, as well as Ophelia in Ambroise Thomas’ Hamlet, and the title role in Douglas Moore’s The Ballad of Baby Doe, with the company.

She’s never had the chance to repeat the latter two, since productions of either are rare, and Swenson says she’s pleased to have done both roles here. “I did so many things in San Francisco, and I’ve enjoyed my time here so very much. I have to say that everything I’ve sung here has been special and always a pleasure to sing.” Swenson and Burnakus settled in Napa in 1991. He is her biggest supporter, onstage and off, and he travels with her everywhere. “He calls it ‘diva tending,’” says Swenson. Yet his role is collaborative as well as protective; after Titus died in 2001, Burnakus, a voice teacher and former member of the San Francisco Opera Chorus, became her coach. “He keeps me in line vocally,” she says.

Swenson has earned a reputation as a cheerful and sympathetic colleague. Yet even she has limits. She recalls singing Gilda in a European staging of Rigoletto, where she was asked to sing “Caro nome” with her arms around a big red ball hanging from the ceiling. She laughs about it now. “Seriously, though, that’s when a singer has to come prepared,” she says. “You have to know your craft, have the role ready in your voice, because the interpretation can really go through a lot of garbage. But those things have only happened a handful of times. Really, when you’re singing Gilda, she is who she is and that goes over the footlights, and you get beyond the fact that these strange things are happening around you.” No matter the staging, Swenson’s mantra is “trust the music.” “I think it’s important to understand what the circumstances are around the character, and draw from what you feel in that moment,” she says. “But in every role, you find it in the music — the way the composer writes it tells you a lot. I’m very honest about it, and I don’t try to layer things that aren’t there.” According to her, the best directors do the same: “Good directors make it easy. They need to be clear and do what the composer intended. Those are the best productions, when they actually know the piece and trust the music.” Opera is changing in the digital age, with movie and stadium broadcasts bringing visuals to the fore. But Swenson says the music will always come first. “It’s a singing art form,” she says. “We can’t lose sight of that.” Still, the issue became personal last year, when the soprano went on record in a New York Times interview, alleging that Met impresario Peter Gelb was phasing her out. Asked about it now, she’s philosophical. “I didn’t say anything that wasn’t true,” she says. “General managers change, relationships change. I just keep singing well and hope that they see it. I haven’t changed the person I am or the artist I am.”

At the time, Swenson was struggling with a new role: cancer patient. In August 2006, she was diagnosed with breast cancer following a routine mammogram; she underwent surgery in New York, returning home for chemotherapy in San Francisco. It was a life-changing experience, one that would leave many artists thoroughly demoralized. But Swenson is upbeat. “It’s been challenging, but I’m very positive about it and it’s all behind me now,” she says. “Everyone was amazed that I was able to keep going and stay strong.” In fact, she returned to the Met in the role of Cleopatra three weeks after her last chemo treatment. “I was nervous, because my energy was a little low,” she admits. “But I was determined to show everybody that I’m still here.” Swenson lost her gorgeous hair during chemo — “It’s growing back,” she reports — yet believes the treatments didn’t hurt her voice. “It affected my stamina,” she says. “The chemicals are crummy and they’re hard on the body. But it didn’t affect my voice at all. That’s where good technique comes in, too. You have that to rely on, even when you’re not 100 percent.” Throughout the ordeal, she kept her mind on singing. “Music and my career kept me positive,” she says. “It gave me a goal to look forward to.” Today, Swenson is planning for the future, with upcoming roles including a Lucia in Berlin. This month, though, her 25th anniversary has her thinking of the past. “I’m honored and excited to return, and to receive the Opera Medal,” she says. “But it’s not just about me and my accomplishments. It’s remembering all the people who were so supportive of me — the directors, the conductors, the coaches, the great artists who have sung with me. They nurtured me and treated me as an equal, and I wouldn’t be the person I am today if I hadn’t worked with them. That’s what has made the last 25 years go so fast, and that’s what has made it so special. This is just a very nice cherry on top of the sundae.”