When the American Music Center announced that the Walden School had won this year’s New Music Educator Award, it surprised Director Seth Brenzel. Even though he had no idea that Walden was even being considered, he’s both pleased and grateful for the recognition of the decades of inspiration that the teachers at this innovative summer camp have provided, and feels happy that more people will know about the New Hampshire–based combination summer camp, music festival, and school that he calls a best-kept secret. “I want people to know, because there are people who would love this,” he remarks. 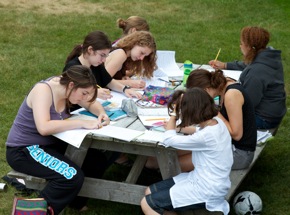 Details on some popular choices

Musical Training, on the Job

The American Music Center annual awards honor trendsetters in new American music. In announcing the New Music Educator award, which has been offered only since 2006, a center spokesperson praised Walden School for its creative philosophy and its curriculum. Clearly, this is not your average music camp, which typically emphasizes instrumental technique and concentrates on repertoire. Instead, it approaches music through composition and improvisation; focusing on what Brenzel calls “all the other things.”

It’s all part of the philosophy of Grace Cushman. A music educator and teacher at the famed Peabody Institute in Baltimore, she founded the original camp, then known as the Junior Conservatory Camp, in Dublin, New Hampshire, over 60 years ago; it became the Walden School in 1972 and was established in San Francisco in 1996, where staff members live, and many musical collaborations are formed. Her philosophy (not to be confused with the Waldorf philosophy) was that music should be studied like a language, learning its syntax — intervals, through-singing, playing, and hearing. It’s a highly active approach that teaches the underlying building blocks of music, and the creative process of using them to compose your own works. Says Brenzel, "Composition is one of the many skills that a well-rounded musician should have access to in terms of training and experience, even if a musician does not go on to be a full-time composer.”

To that end, Walden School stresses singing and composition, along with music theory, improvisation, music analysis, and music history. The chorus meets daily, and everyone — students, faculty, and even staff — takes part. Private composition lessons are also held daily, as students all work on original compositions; the compositions are then performed by staff and advanced students, while the student composers are present to answer questions and explain what they’ve done. Classes in jazz and computer music, Indian music, world music, experimental acoustics, “music and stomp,” and film scoring have also been added to the curriculum, proving, as Brenzel says, how adaptable the concept is.

Students From All Over, Learning Just About Everything 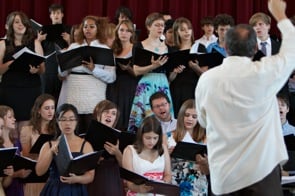 Ranging in age from 9 to 18, students vary in experience from beginning to advanced, and are instrumentalists and composers. This year they make up an especially international group, coming from as nearby as the Bay Area and Boston and as far away as Mumbai and Singapore. With just 50 participants, the camp ensures that students will be in small classes of three to seven students, and will spend a good deal of one-on-one time with teachers and the impressive roster of guest artists and artists in residence, many from this area: Del Sol Quartet was in residence last year and Pamela Z performs this year. Although the school doesn’t offer instrumental lessons, students are encouraged to bring their instruments, as there’s a fair chance that they’ll spend time there learning to play different ones. The goal is to create well-rounded musicians. As Brenzel describes it, students may slow down a bit when working on repertoire, but they’ll shoot light years ahead in terms of musical understanding, which helps them move quickly overall.

It’s not just music, though. Students join the faculty, who live among them, for hikes, dances, and swims in nearby Dublin Lake. The sense of community fostered during the five weeks of camp shows in the number of returning students — generally, close to two-thirds of the group. Even Brenzel is, to some extent, a returning student, having spent six summers there as a teenager.

If this sounds like something you would have loved when younger, don’t despair. A Teacher Training Institute is offered every year. There’s also a one-week camp in which adults can explore their inner creativity.

One look at the program at Walden School, and it’s clear why it was chosen for this award. It’s innovative, unusual, and focused on fostering a more well-rounded and creative music student. Check out their programs here.