What Charles Ives Heard: A Guide to His Fourth Symphony

Part of the fascination came from the expanded performance forces — like the Mahler symphonies and many other pieces written in the first two decades of the 20th century, it’s gargantuan and a feat of logistics just to assemble everything you need. But it’s also Ives’s big “why?” piece, in which the composer asks some of the philosophical questions that we normally deify artists for treating, convincingly, in their art. It’s a piece that seems right for a large musical organization to take on, and when I talked to Matthew Spivey, the orchestra’s director of artistic planning, just before the concerts, this is exactly what had him so excited.

When I think of our existential questions, you know, ‘Why does a symphony orchestra exist; what’s our role in this world?’ for me the concert hall is a place where you have an opportunity to shut some of the noise of life out for a moment and really think and perhaps consider some deeper thoughts and, as a result, understand yourself better. [Audiences] may or may not agree with Ives’s suggestion about why we’re all here and where this is all going, but it’s an opportunity to consider that [question] and that’s incredibly rewarding.

There’s been a lot of mythologizing about Ives, about his penchant for using hymn tunes and nostalgic evocations of Americana, and for heterophonic effects in which different types of music are played simultaneously and this is the short version of Ives we always hand to audiences as their way in to the music. But in the Fourth Symphony, the composer is not simply engaging in scene-painting, he’s approaching what his biographer, Jan Swafford, suggested was his “holy of holies.”

The Fourth Symphony’s first movement is titled Prelude and it contains a stark, declamatory theme in the basses and piano that, in MTT’s interpretation, poses the meaning of life question. And strings, harp, and chorus (the “distant choir” offstage, or suspended above the stage) play the hymn “Nearer My God to Thee” which, because of the repetition in the lyrics, is “almost a mantra-like repetition of the Transcendentalist's ideal, to be nearer, to be at one with God,” as MTT put it in a conversation with Edward Seckerson. But there are a number of other hymns quoted in the movement and, as Spivey pointed out, they are more prominent than other quotations in the symphony. 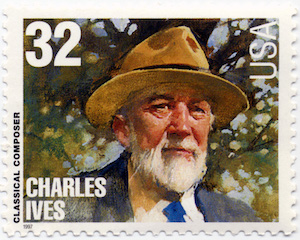 But religion, to be true religion, has to delve beneath its forms of worship, and so the prelude launches into the weird and wild “Comedy” movement, an expansion of Ives’s piano piece “The Celestial Railroad,” based on Nathaniel Hawthorne’s story of the same name. Because the music splits into more than one tempo at a time, at least one extra conductor is required. Lots of different types of tunes are quoted. This is the world as it appears, with everything very much on the surface. Thus no one thing is more important than another, which is why nothing in this movement gains the upper hand and everything goes along at the same time. As MTT puts it, “It's a parody of the hustle and bustle and overkill of noise in modern society, and a parody of the sort of music that's played at ladies' teas, when they have pink lemonade and listen to salon music.” Spivey elaborated:

What makes this a comedy, is the juxtaposition of things that are the trials of life and are difficult and challenging against these jaunty tunes that take life for what is is and don’t worry about the rest of it. And they’re right side by side. And in contemporary society we approach life in just that way; we kind of hop through things and are content not to take a deeper look and ignore what makes life difficult around us. And that’s one – not particularly satisfying – answer to the question of existence.

The third movement is technically a fugue, but I think of it more as a “fuging tune” since this movement represents Congregationalism. It’s quiet, dominated by the hymn tune “From Greenland’s Icy Mountains” and its formalism is a direct answer to the uproariousness of the preceding movement.

Lastly, the finale introduces a percussion group that is meant to be (and in the S.F. Symphony performances actually was) under the stage. It is the ticking clock on individual existence and it plays in a different tempo from the rest of the orchestra. This “apotheosis” movement takes the religious answer to existence a step further by sublimating all the other, previous answers into it. As the main processional theme gets more desperate, “an absolutely Calvary-like passage, where sounds occur like souls being borne down through great travail by the immense power of the orchestra.”  the orchestra builds to an “obliterating climax” and then “Nearer My God to Thee” returns in a quarter-tone harmonization. It is the release the movement is longing for. Spivey explains:

When the quarter tone piano comes in it is a distinctly different sound world and in some ways is a more jarring change than having melodies in different keys going simultaneously. And for me it means that we are entering a separate realm … If ever there was something that was transcendent it is the final movement of this symphony. The introduction of quarter tones really pulls us out of the earthbound realm of sounds and signals a different level. On a practical level it gives you that dreamlike state that gently pulls you off the ground and lets you ascend to a different level of thinking about things.

This is the real Ives, the one who took all varieties of musical experience and used them to suggest that underneath, all kinds of music are leading us to a similar truth if we would see it. We may not agree, but as an artistic experience, it’s hard to deny its suggestive power.

The Ives Quartet performs a program that would have drawn a spectrum of reactions from the namesake composer.