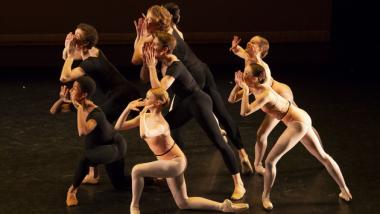 Could this have happened at a more propitious moment?

American Ballet Theatre announced the formation of the ABT Women’s Movement, a multi-year initiative to support the creation, exploration, and staging of new works by female choreographers for ABT and the ABT Studio Company. The initiative was announced today by ABT Artistic Director Kevin McKenzie.

The ABT Women’s Movement will support at least three female choreographers each season to create new works for American Ballet Theatre. In most years, one work will be designated for ABT’s main company, one for the ABT Studio Company, and one will be a work-in-process workshop for ABT or Studio Company dancers. Each choreographer will work with her respective group of dancers for a two-to-five-week period, receiving guidance and feedback from ABT’s artistic staff.

The opening night Gala performance of American Ballet Theatre’s 2018 Fall season will celebrate the ABT Women’s Movement with an evening devoted to works by female choreographers. The Gala program on October 17 will include a new work by tap dancer and choreographer Michelle Dorrance, Le Jeune by New York City Ballet principal dancer Lauren Lovette, created in 2017 and performed by the ABT Studio Company, and In the Upper Room by Twyla Tharp. The 2018 Fall season will also feature a new work by choreographer Jessica Lang.”

But wait! Why has ABT done so much for women choreographers, when so many other companies have not? Examples abound, but they don’t call us San Francisco Classical Voice for nothing.

Take the San Francisco Ballet’s recent Unbound Festival, devoted to saluting rising choreographers. The company, which has risen to brilliance under the 43-year guidance of artistic director Helgi Tomasson, presented 12 new ballets by 12 choreographers. How many of the ballets were by women?

This fits tidily and sadly within the syllabus of elementary school arithmetic. Two out of 12. One sixth. That’s 16.667 percent. By any calculation, that doesn’t mean that women choreographers can look forward to a “bright” future at the San Francisco Ballet, as one renowned critic would have it. No matter how splendid and how gifted the company’s ballerinas are, recognition of their talents does not extend to women who might make equally splendid dances for them.

It will come as no surprise that, of the dozen works commissioned for performance at Unbound, only a few were unreservedly terrific. Making great dance is a ridiculously difficult proposition, as is making great dancers.

So let’s take a look (we won’t name names here). Of all the new ballets, four out of the 10 created by men were superb. So was one of the two created by women. So: 40 percent of the manmade ballets versus 50 percent of the woman-made (See? No such word as woman-made; thus the hyphen. Just you wait, Merriam and Webster! And hopefully not too long.)

And why does the absence of women choreographers matter? For one thing, non-discrimination is the (nigh-unenforceable) law. And also, for reasons that are financial, physical, and even psychological.

After all, to make it difficult for women choreographers to step into the limelight at a time of #MeToo makes it easier for abusers to pick on people, physically and emotionally, whom they perceive as less powerful, less qualified, than themselves. It’s harder for victims to come forward. Also, consider the differences in pay and in benefits within dance companies. Feminists have commented that as dance becomes a better source of enough income to support a family, more men have become interested in taking part — as dancers, but also as choreographers, upping the competition for dance jobs. Too, societal attitudes have made it (thankfully) more acceptable for men to work in ballet.

Success at choreography, or at discovering choreographers, rewards male leaders of dance companies; no women have been whispered of as possibly the next artistic director of the New York City Ballet, but choreographer Justin Peck (whose premiere Hurry Up, We’re Dreaming was in Unbound) has. The City Ballet job is open because longtime-Artistic Director Peter Martins retired in the wake of an investigation into charges of abusive conduct with women in the company, an investigation in which none of the allegations were proven. Of course, since Martins assumed the helm after George Balanchine’s death, no woman has ever led the City Ballet, although a few have choreographed there. Principal dancer Lauren Lovette has a ballet in ABT’s Women’s Movement.

Which brings us to American Ballet Theatre. The troupe, as Artistic Director Kevin McKenzie points out, did not jeté full-blown into this multi-pronged attempt to involve more women in choreography. The ABT Women’s Movement was preceded by the 2016 Women Choreographers Initiative, which supported the world premiere of Jessica Lang’s The Gift, as well as the return of another piece, Her Notes. The upcoming, as yet untitled, new ballet premiering at the Fall Gala is Lang’s third for the company; she credits ABT with nearly 20 years of support. The Initiative also funded Lovett’s piece, now moving to the Koch Theater after its ABT Studio Company premiere, and a ballet by ex-SF Ballet soloist Dana Genshaft, plus a residency for choreographer Pam Tanowitz that had an informal studio showing.

It’s all a product of ABT’s DNA, a logical follow-on to the company’s history of engaging with powerful, gifted women:

* Twyla Tharp, who — in addition to choreographing Push Comes to Shove for ABT — had, in the 1980s, an embedded, dedicated unit with her own dancers to create new work

* Ballerina Natalia Makarova, who in 1980 staged the full-length La Bayadere, adapted from the version she starred in at the Mariinsky Ballet

American Ballet Theatre’s Women’s Movement is unique, and its full-throated endorsement of getting more women involved in choreography unheard of. But now that it’s here, it’s going to be impossible to unhear it.

Unbound Reveals the Bright Future and Robust History of the S.F. Ballet

There are several standouts in this latest round of premieres for SFB.

Amid classic masterpieces, the company brings back some recent hits along with a few new commissions.

After only half the festival, Helgi Tomasson's company is already well-stocked with new pieces.