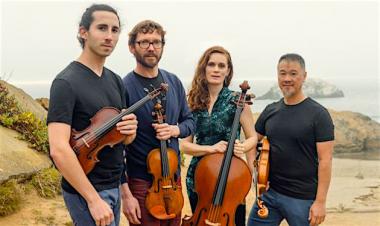 A four-hour concert is unusual these days (unlike in Beethoven’s time), but one at the Contemporary Jewish Museum on Sunday, March 31 may actually go longer. The Del Sol Quartet’s special event — the Pacific Pythagorean Music Festival — is scheduled to go four in the museum’s angular and light-filled Yud Gallery, built with acoustic resonance in mind.

The concert is a celebration of “just intonation,” something well-known to music students and, of course, musicologists, but not to us, the General Public. It’s a historically important approach to music, originating with Pythagoras, around 500 B.C. This has nothing to do with his theorem and triangles, but rather it’s the many-faceted ancient philosopher’s theory of using divisions based on integer ratios on the monochord, a single-string instrument, to create music.

When you touch the string at any fraction of its length, you hear musical tones that add up to resonant intervals. These intervals are the building blocks for most musical traditions around the globe. If this gets both too basic and too complex, as it does for most of us, a surprisingly effective explanation may be found in a Disney animated cartoon, Donald in Mathmagic Land.

Pythagorean intonation would be much better known if it were not for the keyboard becoming the most important musical instrument centuries ago. Keyboard instruments provide a necessary compromise to move around between different pitch centers (from one musical “key” to other keys) without having to completely retune the instrument — something that would be rather awkward and lead to extremely long concerts.

This approximation — rather than “just intonation” — is the basis of modern Western harmony from the 1700s until today and, “for those of us who grew up with this system,” says Del Sol’s Charlton Lee, “it sounds normal. However, the piano is built on mathematically irrational relationships and, to many musicians from other traditions, sounds a bit out of tune.” Lee further explains:

Pythagoras is the first known person to document a tuning system, which is based on pure ratios between the frequencies of different pitches (2:1 for an octave, 3:2 for a fifth, 4:3 a fourth).

As you can imagine, that would create the most resonant harmonies, but if you change your fundamental key center, you would have to change the notes that will make those pure ratios.

Western European harmony created compromises to enable transition between keys using the same 12 notes but losing the richness of just intonation. In fact, if each half step is exactly the same as the previous one, the ratio is a 12th root of 2, which mathematicians call an ‘irrational number.’”

The Bay Area is the birthplace of American “just intonation” compositions, from Harry Partch (1901-1974) and Lou Harrison (1917-2003) to Ben Johnston, 93, who is represented at the concert. Known as a foremost composer of microtonal music, Johnston and others are creating a whole range of music that can be made with keeping “rational numbers” in mind, from soulful variations of “Amazing Grace” to highly calculated avant-garde compositions to the improvised world of extended wind techniques.

Lee calls just intonation “a positive use of mathematics, unlike, say, gambling. And it brings people together.” The organizers say, “In a time of a lot of irrational thought in our country, we want to bring people together to enjoy a return to the rational, a return to simple and pure numbers, as expressed by the beauty and emotion of musical storytelling.”

This first festival also launches a new commissioning arm of Del Sol Performing Arts Organization to produce future works in just intonation, including works to be premiered in 2020.

The Del Sol Quartet, local purveyor of contemporary music, celebrated its 20th anniversary with a small festival at Z Space, where tangy precision was much on display.