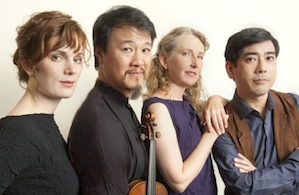 For its 20th-anniversary celebration, the Del Sol String Quartet presented three concerts on three consecutive nights last weekend — a feat made even more impressive considering that the programs consisted entirely of extremely difficult new music. The “Del Sol Days” festival also featured open rehearsals, along with a workshop for composition students. A dozen living composers from all over the world were represented, featuring the extreme variety of postmodern 21st-century music.

The common thread in the first half of Saturday’s concert was grooviness. Irene Sazer’s Thunder (2012) never sounded deafening or ominous, despite its name. It was a sweet and playful ride propelled by jittery rhythms. Dylan Mattingly’s Gone, Gone, Gone (2012) is essentially a very long crescendo beginning with a quiet stillness and ending with frantic chaos. Throughout this growth process, a pulse emerges from beneath the surface, then ebbs back into the obscure texture. The effect was captivating — too much amorphous vagueness leads the mind to wander, too obvious a beat can make a piece grow monotonous. This piece struck the right balance between fun and challenging, all performed with the fluid cues and a warmth of music-making that befits an ensemble named after the sun.

Mattingly was among the students in Del Sol’s previous workshops about 10 years ago. Second Violinist Rick Shinozaki attested that this young composer has come a long way since the quartet worked with his juvenilia. When a group stays vital for such an extended period, rich long-term artistic relationships can develop.

The two premieres by Sazer and Mattingly blended grooviness with a complexity that created a fleeting sense of pulse. The picking at subdivisions of the beat was dazzling — like Dvořák, but even more difficult. In Mason Bates’ Bagatelles for String Quartet and Electronica (2011, in its San Francisco premiere), I was surprised at how square and unimaginative some of the beat patterns were, especially in the first three movements. I first heard Bates’ music at the Mezzanine club where the instrumental parts were blown away by the electronic beats. Bates has since garnered worldwide acclaim, writing for the San Francisco and Chicago Symphonies.

[Mattingly’s] piece struck the right balance between fun and challenging.

Composers since the Renaissance have been seeking crossovers from academic music with written notes to popular music, whether it be folk songs or hip-hop, rock ’n’ roll, or the latest fad. This is a worthwhile endeavor, though the mixing of genres is tricky, since sometimes the essence of one side or the other gets lost in translation. You could slap a 4/4 electronic loop on top of anything, for example. Or you could just turn on a metronome. Do they really fit together? Or is it merely two different genres playing at the same time? Is the music complex enough for the concert hall and also groovy enough for the club?

Naturally, something new and different in the middle arises throughout Bates’ piece, yet it sometimes sounded like the worst of both worlds. Some sections seemed awkward, as if each side was making room for the other. The equalization (EQ) was top-heavy, resulting in metallic-sounding strings, almost blue-grassy. A few of the samples sounded crackly, rather like distortion or clipped sounds. Normally composers avoid this, but Bates embraces this found artifact and features it as part of the beat. The fourth movement, “Viscera,” was especially fun to listen to, provoking many audience members to tap their laps or sway their shoulders while seated. Bates is most effective when he lets the electronics run wild while the humans add color and soulful melody.

Bates is most effective when he lets the electronics run wild while the humans add color and soulful melody.

In the second half, Stephen Kent and his four didgeridoos joined the quartet. He was first introduced with an improvisatory solo titled Fire in the Belly. Kent held the long wooden tubes in his right hand while playing the chimes and shakers with the other hand, with elegant motions. Kent’s didgeridoo produced an enormous sound with overtones sliding in and out, punctuated by the percussion and enhanced by ambient amplification. Kent then joined the quartet for the final piece in Peter Sculthorpe’s String Quartet No. 16 (2005). Hailing from Australia, Sculthorpe delved deeper than simply using the didgeridoo as an added gimmick; in fact, he features the instrument in several of his quartets. Even though the didgeridooo is optional in this piece, it felt like an integral part of the sound, lending the strings an immense girth.

The 16th Quartet deals with letters from Afghan refugees trapped in a concentration camp in a sweltering desert in Australia. Running from the horrors of the Taliban and the American invasion, they were fenced in, with no voice or representation. In protest, the asylum-seekers sewed their mouths shut and resorted to sending letters out to the world. Each movement is based on an emotion from these communications. The movements are titled “Loneliness,” “Anger,” “Yearning,” “Trauma,” and “Freedom.” Sculthorpe sets gut-wrenching, Middle-Eastern-flavored melodies alongside the gnarliest feasible extremes of the instruments. In the context of the story informing the piece, we can see why such extremes are called for — and that makes all the difference. A mammoth viola solo in the work, performed by Charlton Lee, was one of the more moving parts of the concert. Kate Stenberg could not muster up as much pathos when the first-violin part received similar solos.

The setting for “Del Sol Days” was the warehouse-like Z-Space on Florida and Mariposa Streets in San Francisco. On the outskirts of the city’s Mission District, the location is a bit sketchy but also adds a gritty edge to the concert experience.