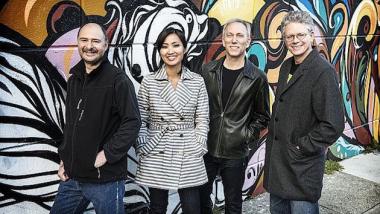 The Kronos Quartet’s selfless celebration of its half-century run culminates in free music created in the “Fifty for the Future” project. Launched in 2015, the project’s purpose is to have 50 new string quartet works created by an international group of 25 female and 25 male composers. Performances of this music for the training of students and emerging professionals are now also available to the public.

This free library of 50 contemporary works designed to guide string quartets in developing and honing the skills required for the performance of 21st-century repertoire is online. The site’s enables users to search by character, tonality, tempo, technique, instrumentation, and notation as well as by composer.

Besides the score and sound file, each composition has program notes and artist biographies. Clicking on Laurie Anderson’s Shutter Island, for example, provides the recording, free scores and parts, and other materials.

Each of the 50 works is premiered by Kronos, with the project becoming a core component of the quartet’s own repertoire over six performance seasons, 2015 through 2021.

Through Kronos’s “50 for the Future,” we are filling a need, of creating a thought-out primer, created by our very best collaborators. This primer is in part inspired by Béla Bartók’s Mikrokosmos, which he wrote for his son as an entry point to piano studies.

Each piece explores necessary issues needed for the future. Each piece is a real piece, a real investment in making a future in music possible. We have access to the worldwide community of exceptionally creative people capable of making a multifaceted primer for the youngest enthusiasts among us.

We have now chosen all 50 composers who have agreed to make one spoke in this wheel, and they are all very enthusiastic about contributing to something that will lead young players toward the music of the future. With careful work, I am confident we will end up with magical entry points for players to enter the world of string quartet ensemble music for the 21st century.

Listen to Philip Glass talking about his personal background and involvement with the project for which he wrote Quartet Satz.

“Fifty for the Future” has a broad support base, including lead partner Carnegie Hall, legacy partners Aga Khan Music Initiative, The Arts Center at New York University Abu Dhabi, Cal Performances/University of California, Center for the Art of Performance at UCLA, Cornish College of the Arts, Harris Theater for Music and Dance, Holland Festival, Kaufman Music Center’s Face the Music, Krannert Center for the Performing Arts/University of Illinois at Urbana-Champaign, The Performing Arts Center at SUNY Purchase, ProQuartet, Ruth Asawa San Francisco School of the Arts, Serious/Barbican, Texas Performing Arts Association at the University of Texas at Austin, Washington Performing Arts; and a score of commissioning partners.

Only Risk Rewards at Kronos Festival

Mariana Sadovska joined Kronos in a riveting performance of her Chernobyl.The Harvest, new music that, at last, took some risks.