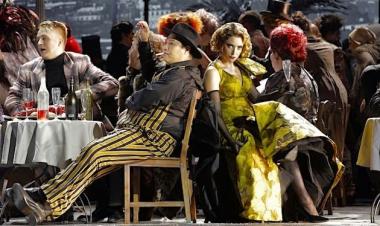 It’s hardly news that classical concerts are canceled for the foreseeable future. Or that online performances have rushed in to fill the void. But despite the impersonal and totalizing impact of the novel coronavirus, musicians and artists are sharing something personal. The Los Angeles Opera has taken that mission to heart, offering an expanded “At Home” series that highlights everything LA Opera.

Since March 17, the company has been streaming “Living Room Recitals” semiweekly. Hear singers from around the world — past young artists, LA Opera regulars, and more — in repertoire from Mozart to Broadway, and with live accompaniment more often than not! Baritone Will Liverman, who is slated to play Leporello in next season’s Don Giovanni, sings the next recital, April 16 at 3 p.m. PDT.

Count yourself among new (or returning) audience members with “From the Vault,” the company’s audio-livestreaming series of past productions — almost like a weekly radio broadcast. April 15 is a 2019 performance of La bohème, starting at 5 p.m. PDT.

And explore what else LA Opera has on offer. Music Director James Conlon talks about Wagner’s fraught influence on Debussy in a podcast episode from last month. The Prospector, LA Opera’s one-act, kid-friendly take on The Girl of the Golden West, is available online to stream. And Associate Chorus Master Jeremy Frank hosts a virtual “Opera Happy Hour,” next meeting April 14 at 5:30 p.m. PDT.

For a complete list of online programming and to tune in to upcoming and past “LA Opera At Home” performances, visit the company’s website or Facebook page.

The Adler Fellows are contributing songs and arias daily to the mix of material that SF Opera is putting out for its patrons during the coronavirus shutdown.

L.A. Arts Organizations Are Looking for a Way Forward

COVID-19 is forcing music presenters to make hard choices. Many are uniting to find ways to survive.

LA Phil Announces a Full Summer at the Hollywood Bowl