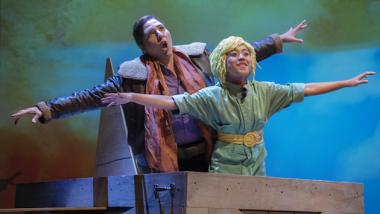 The Little Prince to Land on This Planet Again

“You do not live here,” said the fox. “What is it that you are looking for?”

“I am looking for men,” said the little prince.

“Men,” said the fox. “They have guns, and they hunt. It is very disturbing. They also raise chickens. These are their only interests. Are you looking for chickens?”

“No,” said the little prince. “I am looking for friends.”

“It is an act too often neglected,” said the fox.

The unique, heartwarming simplicity and wisdom of Antoine de Saint-Exupéry’s The Little Prince, in Opera Parallèle’s production of Rachel Portman’s opera version, is returning for the holidays.

Four performances between Dec. 7 and 9, in the Marines’ Memorial Theater will provide an opportunity to those who might have missed last year’s triumphant run... and those who want to repeat the experience.

Opera Parallèle Music Director Nicole Paiement will conduct the opera, and she is looking forward to the performances:

Rachel Portman’s lyrical and colorful score captures this enchanting story in such a unique way. I love bringing to life the magic of all the characters, from the rose and the water, to the baobabs and hunters. It is such a perfect work for reminding us all during the holiday season of what truly matters.

Paiement’s reference is to one of the book’s many pearls of wisdom, spoken by the Fox: “And now here is my secret, a very simple secret: It is only with the heart that one can see rightly; what is essential is invisible to the eye.”

The opera is produced in collaboration with the San Francisco Girls Chorus. Brian Staufenbiel is creative director, and the production features illustrations and media design by Matt Kish and David Murakami, respectively. Choreography is by Yayoi Kambara, and costumes by Christine Crook.

This latest addition to holiday entertainment — joining The Nutcracker, Messiah, A Christmas Carol, and others — features preperformance, interactive activities for families and children, including an invitation to join the cast in the final chorus of the opera. Tickets are priced $25-$75.

The cast includes mezzo Eve Gigliotti as the Pilot, Sophia Stolte and Erin Enriquez as the Little Prince (alternating performances), mezzo Kindra Scharich as the Fox, soprano Sabrina Romero-Wilson as the Rose, soprano Maggie Finnegan as the Water, tenor Samuel Faustine as the Lamplighter/Drunkard, tenor J. Raymond Meyers as the Vain Man, baritone Zachary Lenox as the Businessman, bass-baritone Philip Skinner as the King, soprano Christabel Nunoo as the Snake, and members of the San Francisco Girls Chorus as stars and birds.