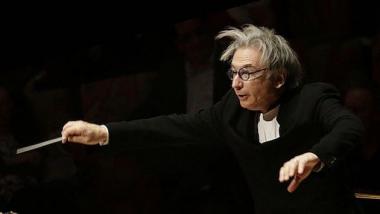 Michael Tilson Thomas, who has announced stepping down as the San Francisco Symphony’s music director in 2020 (remaining music director laureate) when he will turn 75, shows absolutely no sign of slowing down.

Even with the holidays just around the corner, MTT is wielding the baton in Los Angeles, Dec. 14–17; coming back to Davies Hall in January; then he takes off for a big event in Miami, where his New World Symphony is celebrating its 30th birthday, the occasion bringing together members of the Music Critics Association of North America. March will find MTT in Philadelphia and Cleveland, guest-conducting programs anchored in Tchaikovsky’s Pathétique Symphony.

The quick trip to MTT’s birthplace resulted from a cancelation by the long-scheduled Zubin Mehta, who is recovering from shoulder surgery. The Philharmonic announced that “L.A. favorite Michael Tilson Thomas returns for this powerful pairing of music and musicians. Extraordinary pianist Khatia Buniatishvili is his partner in Mozart [Piano Concerto No. 23], and Bruckner’s Seventh Symphony caps the program.”

Then, it will be MTT-SFS Jan. 18–21, in a concert version of Leonard Bernstein’s  Candide, and the music director hitting the road until mid-March, his predecessor, Herbert Blomstedt, leading concerts in February.

There is a big celebration cooking at MTT’s “other orchestra,” Miami’s New World Symphony, of which he is co-founder and artistic director. That unique organization is called “America’s Orchestral Academy” because it trains conservatory and music school graduates for careers in professional orchestras and ensembles.

“I’m encouraged to see the multiple generations of NWS alumni that are spokespeople for a more engaged way of thinking about classical music,” says MTT. “And though the integration of technology and experimentation with concert formats has increased, what has endured is a sense of personal contact throughout all of our programs and initiatives.”

MCANA, the music critics’ organization, will hold an institute in Miami, Feb. 2–4 as part of the anniversary. The centerpiece of the institute will be the annual New Work concert on Feb. 3, with MTT leading a program of newly commissioned pieces. It includes the world premieres of a musical composition by MTT and a short play by New York playwright Christopher Wall in collaboration with the Playwrights Realm, with NWS fellows performing both musically and theatrically.

Also on the agenda is Project 305’s Miami in Movements, a multisensory reflection of contemporary Miami created by composer Ted Hearne and filmmaker Jonathan David Kane, the culmination of a collaborative, yearlong process that included crowd-sourced audio and video submissions by the public. There will be sessions with MTT, NWS fellows and composers, and the opportunity to attend a rehearsal.

Institute activities will be in the innovative performance facilities and state-of-the-art practice and ensemble rooms of the Frank Gehry-designed New World Center. The center is one of the most technologically advanced music venues in the world, with distance learning and audition coaching projects that amount to as many as 150 interactive musical exchanges a season with other institutions, and featuring New World’s trademark Wallcast concerts in SoundScape Park.

Among the many events of the anniversary celebration: concerts on Feb. 17–18, MTT conducting, Leif Ove Andsnes the soloist in Debussy’s Fantaisie for Piano and Orchestra, plus Xenakis’ Shaar and Stravinsky’s The Firebird.

The program features the world premiere of Ted Hearne’s Miami Movements, a work he created with crowdsourced input from Miami locals.